Before the invention of the printing press, books were produced by hand. You can find examples of such manuscripts from the 13th and 14th centuries in the collection of Western Manuscripts and Early Printed Books.

One of the oldest manuscript books in Open Collections is a Latin Bible from the 13th century. It was written and decorated in England, probably Oxford, by several hands. It includes Old and New Testaments (in 2 columns, 50 lines), Interpretationes Hebraicorum nominum (in 3 columns, 50 lines), and an early owner’s near-contemporary concordance of the Gospels at the end of the volume, listing subjects and chapter numbers in a series of long tables. It also contains numerous 13th to 16th century additions (in margins) in pen or drypoint. 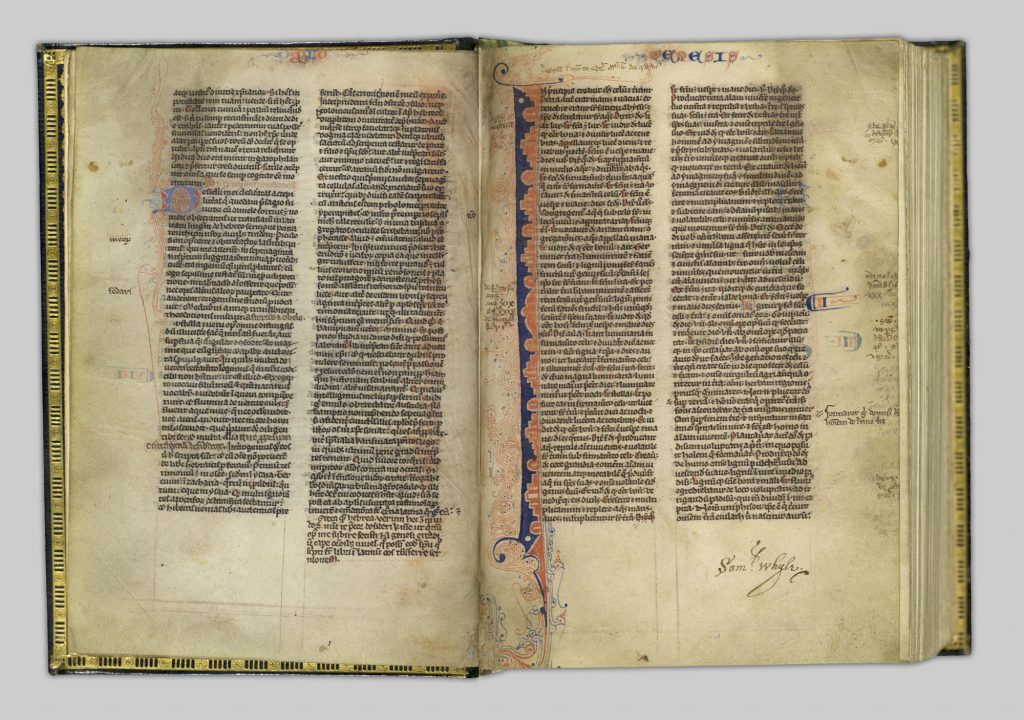 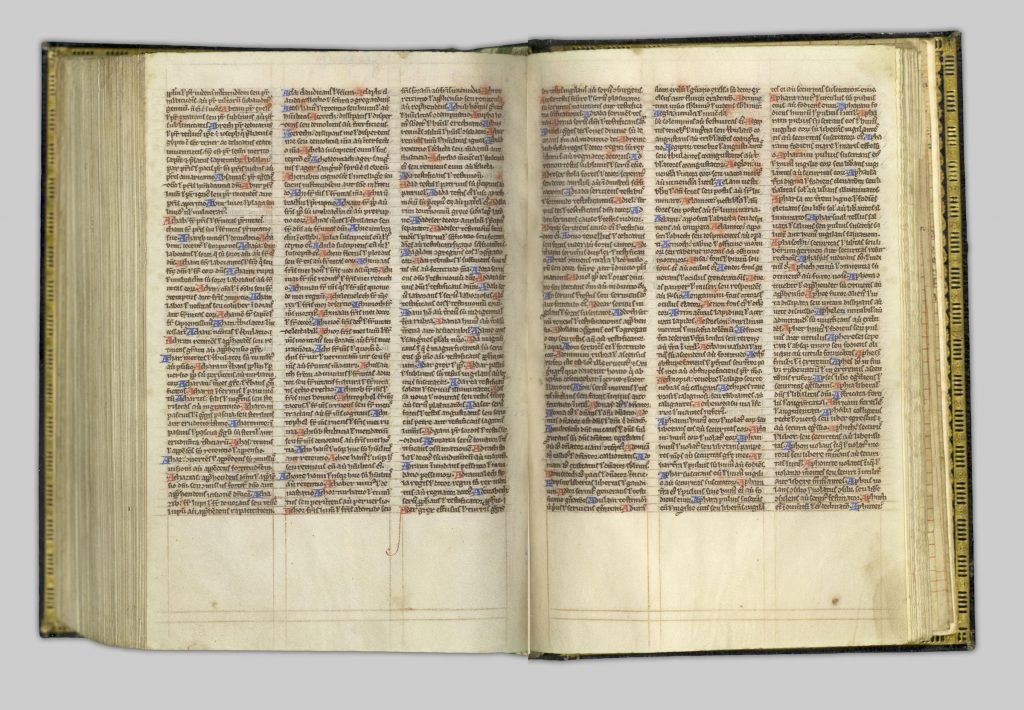 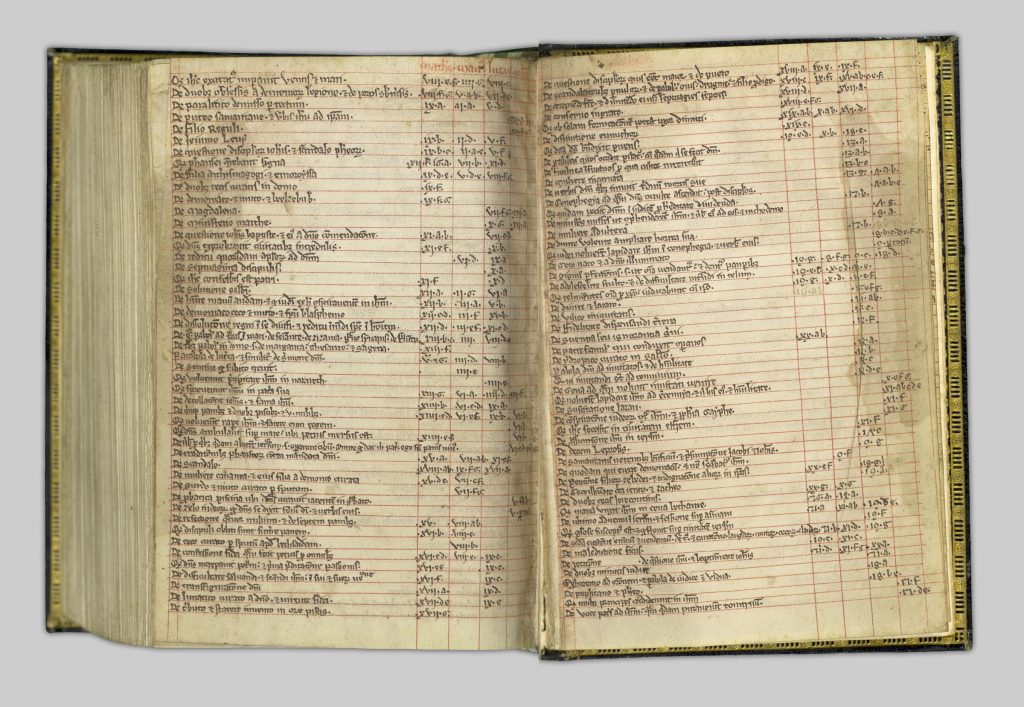 Concordance of the Gospels

The book of hours is a book of Christian prayers and devotions popular in the Middle Ages. It is the most common type of surviving medieval illuminated manuscript, decorated with plenty of miniatures, initials, and line-fillers. This manuscript was written and illuminated in Rouen, France, approximately 1430-1440. The leaf numbers made in pencil in the upper-right corner were from a previous owner. 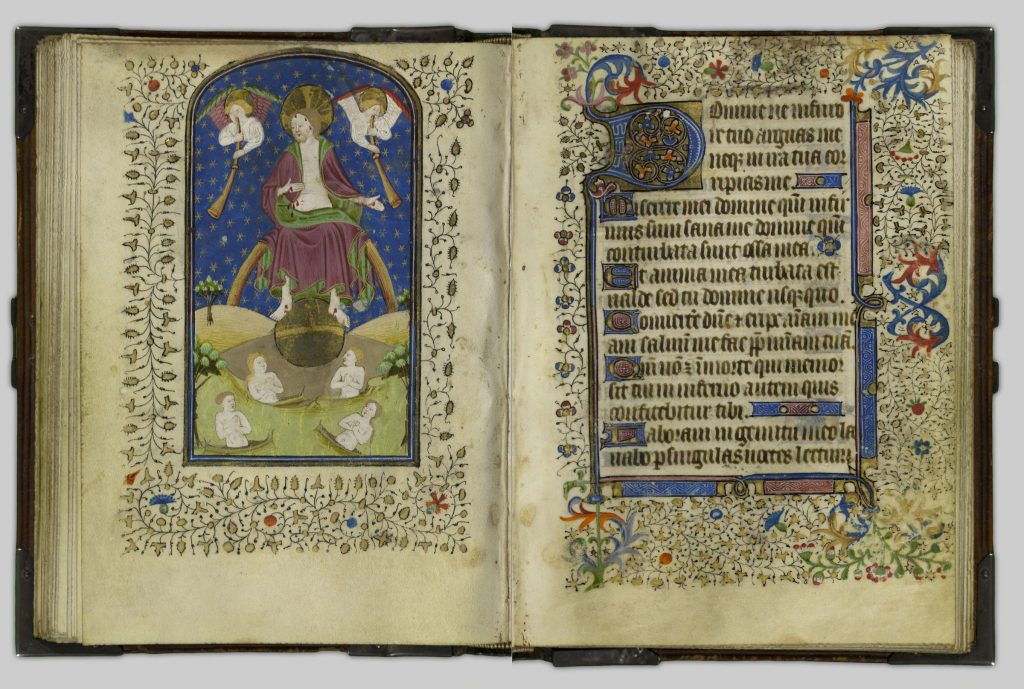 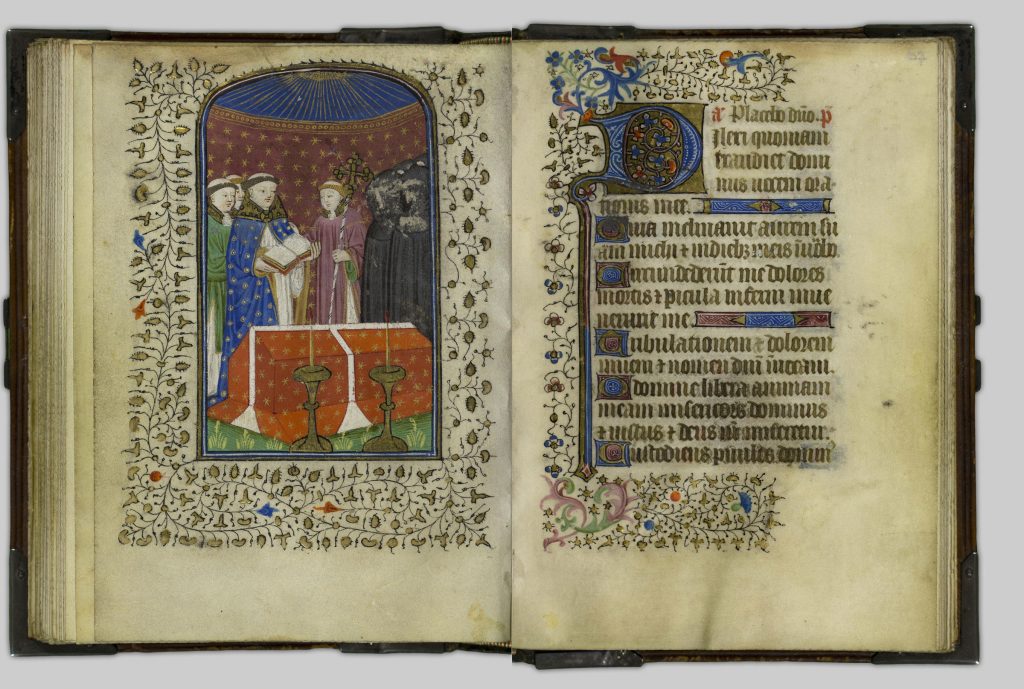 China has been using woodblock technique for book printing since the 9th century (source: Wikipedia). In Open Collections, the oldest printed Chinese book is Li dai jun jian  歷代君鑒, a book about emperors in Chinese history. 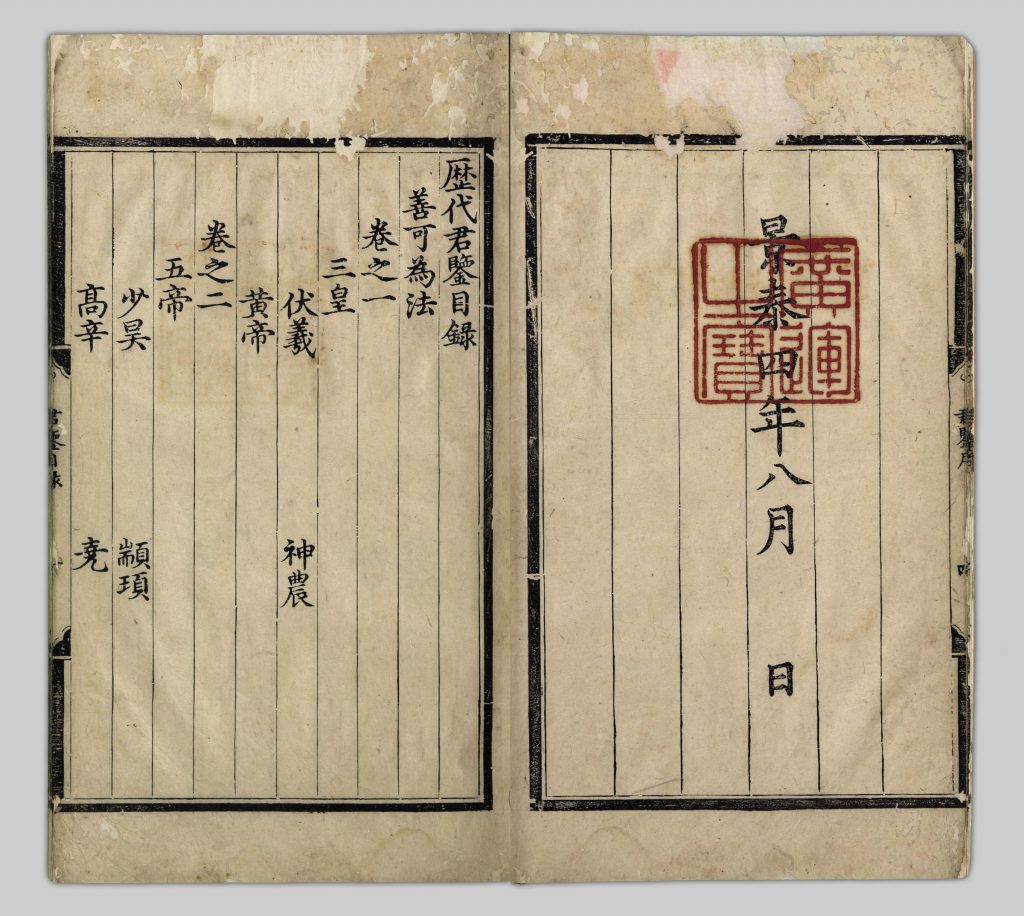 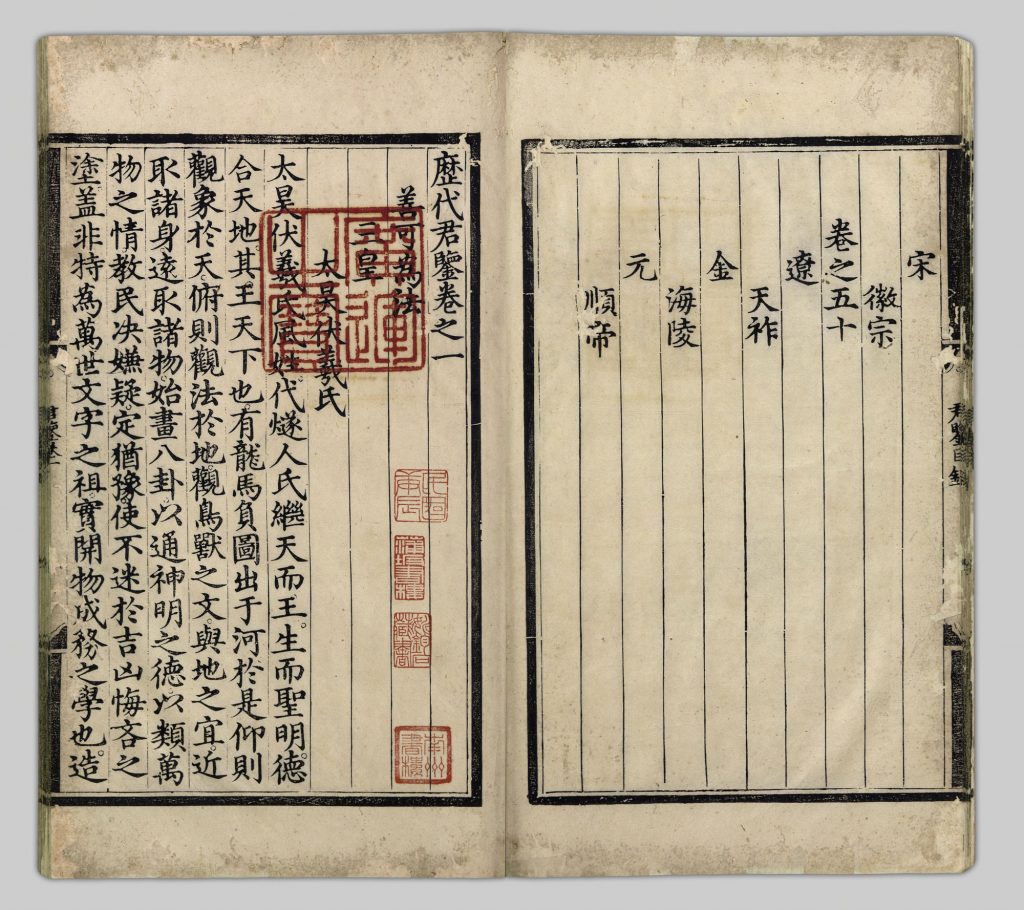 The book was compiled by order of the Jingtai Emperor, the seventh Emperor of the Ming dynasty, China, who reigned from 1449 to 1457. When his elder brother Zhengtong Emperor was captured by Mongols in 1449, he was selected to succeed the throne. Jingtai Emperor asked his officials to compile a book of past emperors, both good and poor, so that he could draw lessons from the history. The book was issued in 1453. But unfortunately for him, only four years later, his elder brother managed to regain power. Jingtai died a month later at the age of 30. (Source: Wikipedia).

The oldest Chinese printed book with illustrations is Handan 邯鄲, a play written by Tang Xianzu. In the 17th century, watching plays was such popular entertainment that books of plays were in high demand. This book is a double-colour woodblock print. It has eight illustrations at the beginning, and a lot of comments printed in red and black in the margins. 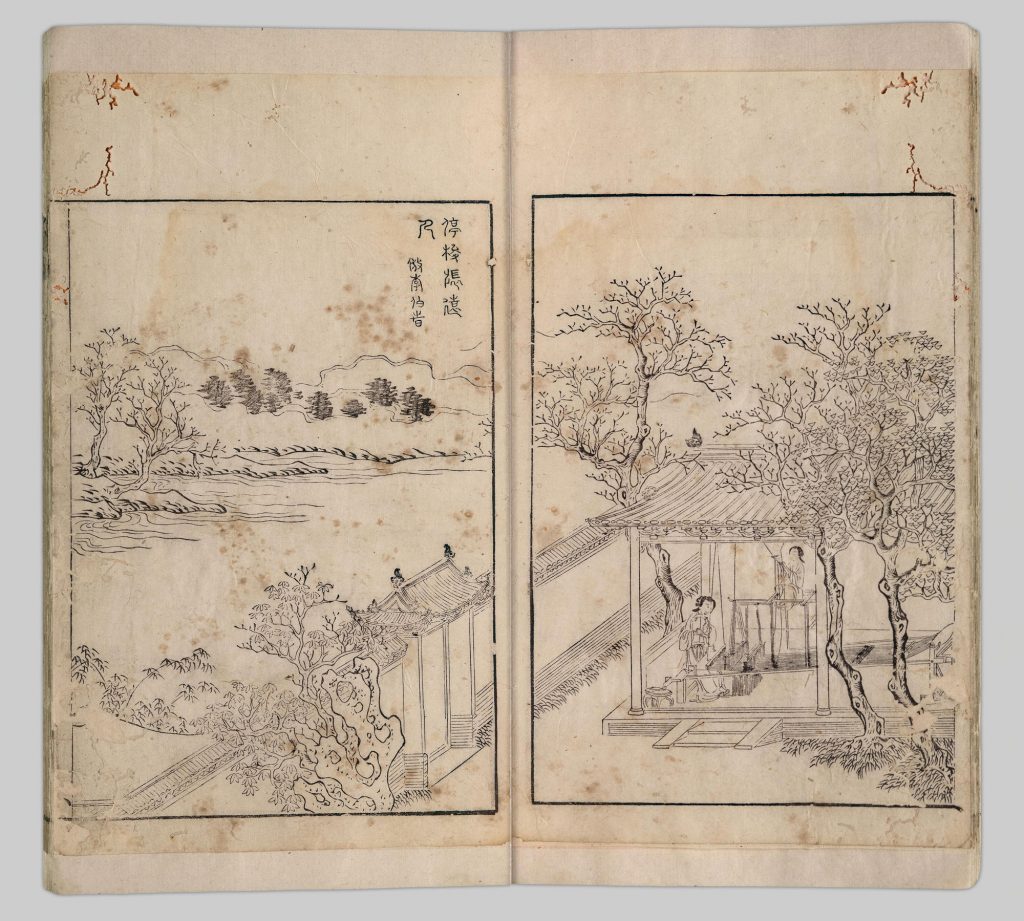 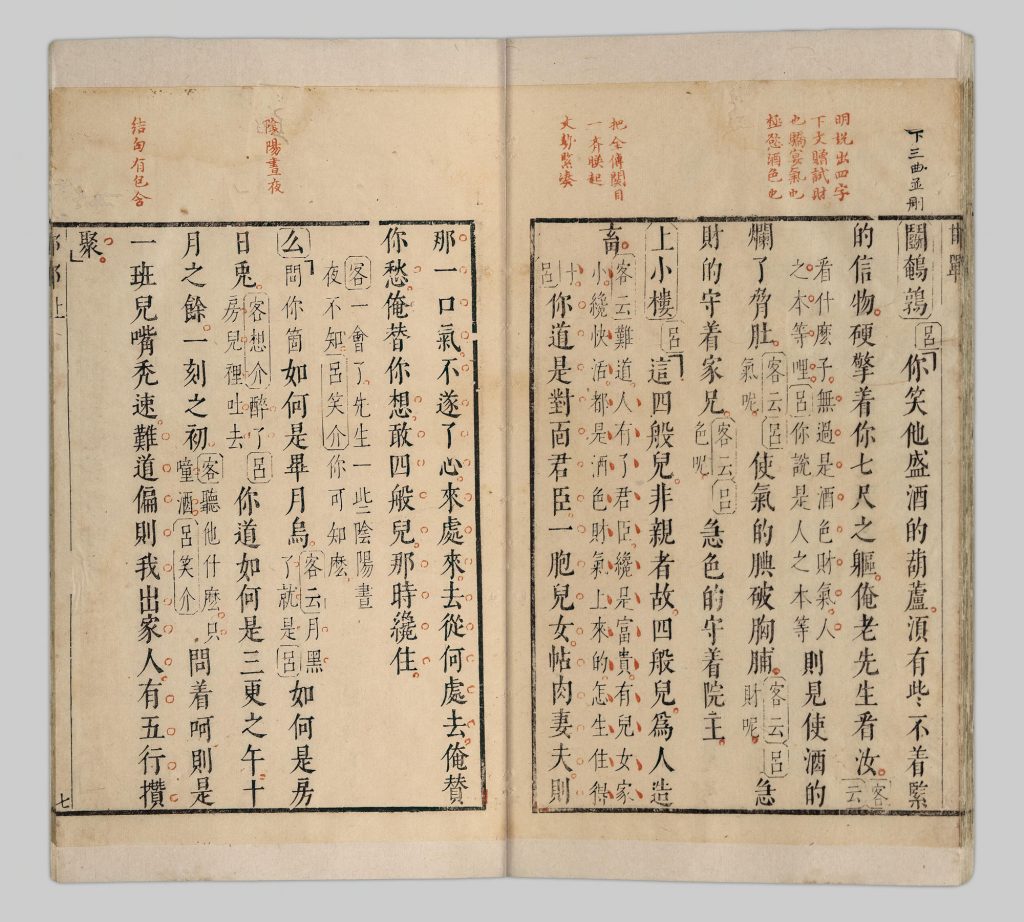 We hope you enjoyed this blog post! To explore more rare books in Open Collections, please check out Western Manuscripts and Early Printed Books and Chinese Rare Books. You may also be interested in this research guide from UBC Library’s Rare Books and Special Collections: UBC Vancouver Course Guides:  History of the Book.