There are 106 items in this collection, including maps, books, albums, and other miscellaneous documents. These projects emphasize the depth and breadth of the Library’s rare materials holdings and give visitors a glimpse into some unique materials.

The Special Project collection contains some bibliographies about the Puban Collection(蒲坂藏書) and the Japanese Maps of the Tokugawa Era Collection.

The Puban Collection is one of the most distinguished Chinese rare book collections in North America. It contains some 3,200 Chinese titles in about 45,000 volumes, including numerous rare books in many subject fields such as history, literature, philology and philosophy. As mentioned in this tweet, the oldest book in Open Collections, Shang shu tong kao 尚書通考, is from the Puban Collection.

This catalogue is about books in the Puban Collection issued during the Sung, Yuan, and Ming Dynasties (960-1644) in China. The author, Yi-t’ung Wang (王伊同, 1914-2016), was a professor at UBC History Department in 1957-l962. Professor Wang picked the most valuable items in this collection and composed a descriptive catalogue. 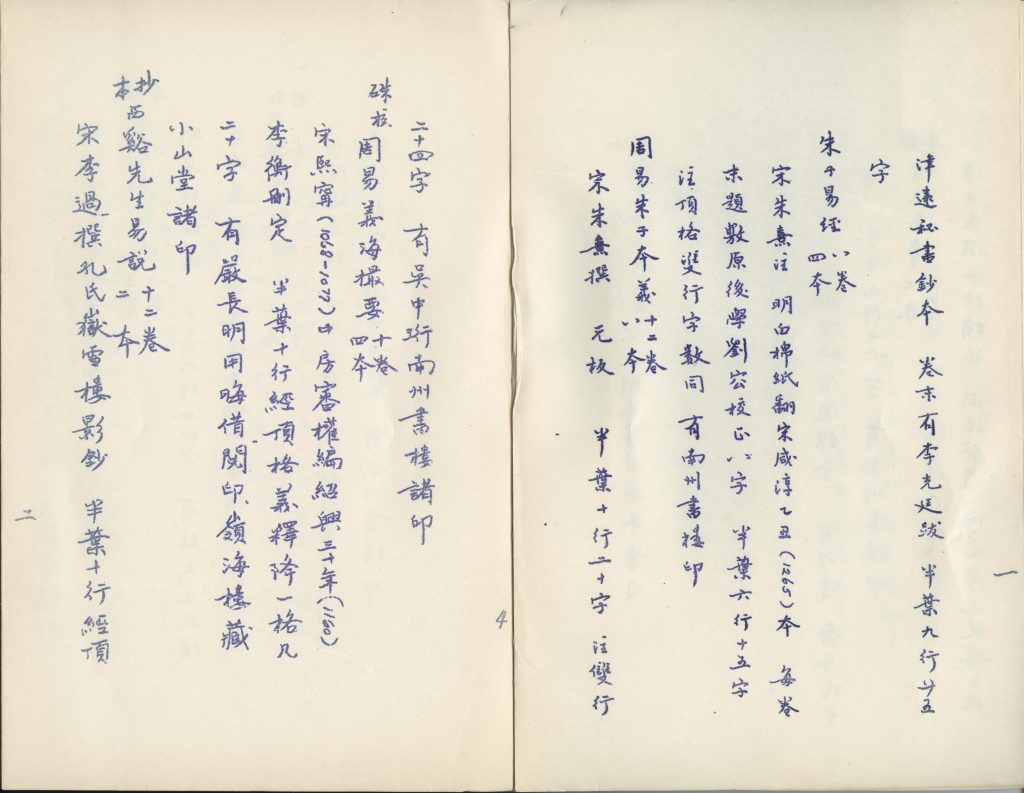 The Puban Collection has not been fully digitized, which makes the bibliography especially informative.  With the help of Professor Wang’s work, we can have a preview of the most precious items in this collection.

There are 68 maps in the Special Projects collection, the oldest of which dates back to approximately 1587. A lot of these maps are nautical charts, mine maps, and geological maps that are quite different from the maps most people are familiar with.

Have you seen a map of Vancouver like this? It is a bird’s-eye view map printed in 1890. It depicts Vancouver in an artistic style, with drawings of 38 city buildings in margins of map, and index to points of interest in the bottom. Downtown Vancouver is in the foreground, while the rest of the city stands at the far end. 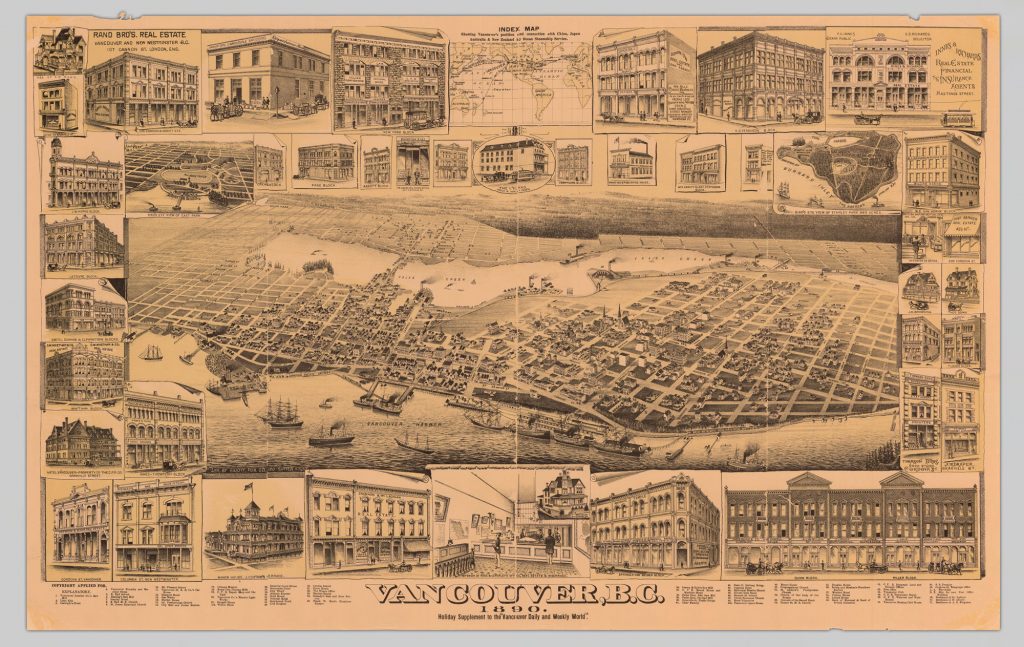 On the left-hand side, there is a bridge across the False Creek. It was the Westminster Avenue Bridge. In 1910, the avenue was renamed as Main Street. The eastern part of False Creek was filled for railway lands in the 1910s and 1920s. As a result, the bridge no longer exists. Another bridge on the False Creek, the Cambie Street Bridge, was opened in 1891, the year after this map was printed.

This is an album of Japanese Canadian children published in 1921. According to the preface, the album was in commemoration of Prince Hirohito’s tour of Europe. It contains photos of 545 children from 259 families. Most of the families lived in B.C. 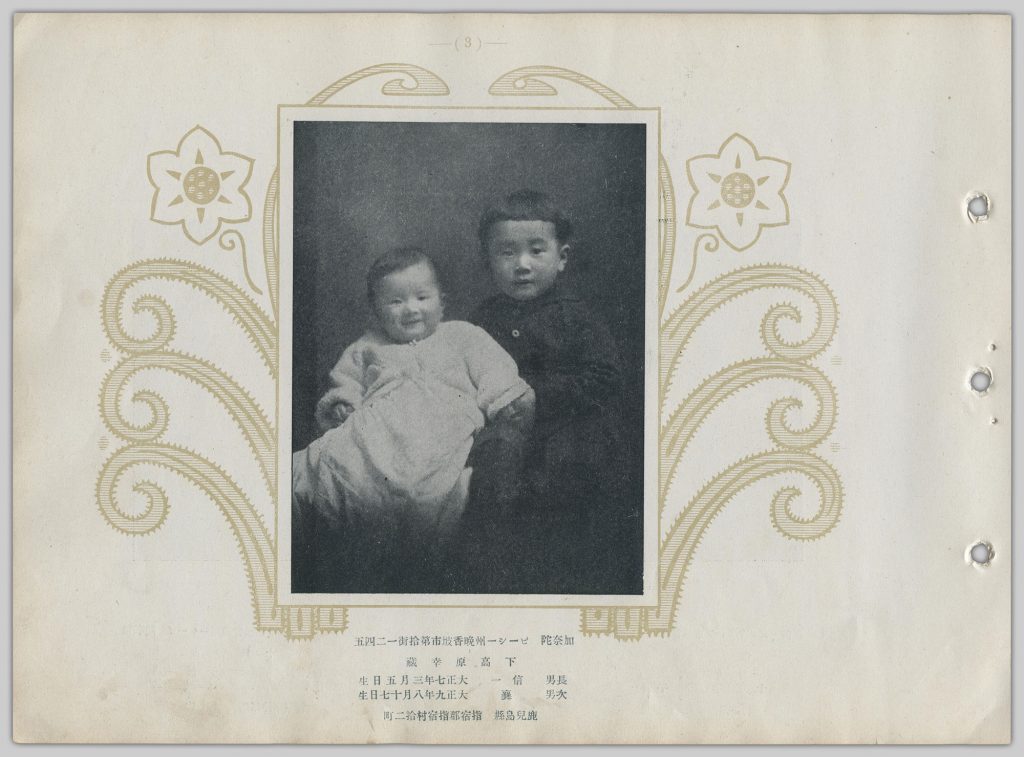 These two boys were living in 10th Avenue, Vancouver. Their family was from Kagoshima, Japan. 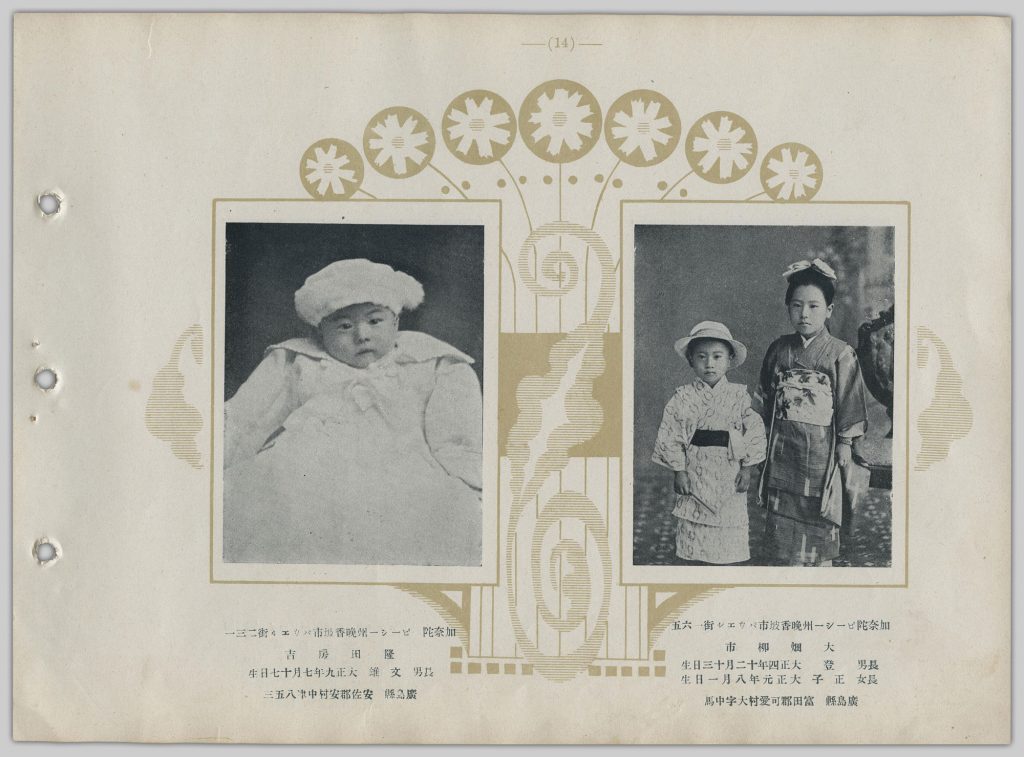 These children were living in Powell Street, Vancouver. Their families were from Hiroshima, Japan. The Powell Street area was once a Japanese neighborhood until World War II when Japanese Canadians within 100 miles of the British Columbia coast were forced to relocate east to the B.C. interior and other provinces.

The album lists the children’s addresses, names, dates of birth, and hometowns in Japan. It is especially valuable for Japanese immigration history and genealogy research.

In 2017, Professor Norifumi Kawahara from Ritsumeikan University in Kyoto, Japan, re-edited and published the album. An alphabetical list of the children’s names in English is attached to the album as well as maps showing where they lived. The re-edited album is available at UBC Asian Library.