The Chung Collection has thousands of photographs and related material on CPR steamships with a particular emphasis on the Empress class ships. Some of the related material includes pamphlets, menus, world cruise photograph albums, clippings, diaries, and correspondence from both passengers and employees of these vessels. In this two-part series, we will explore some advertisements issued by CPR steamships. 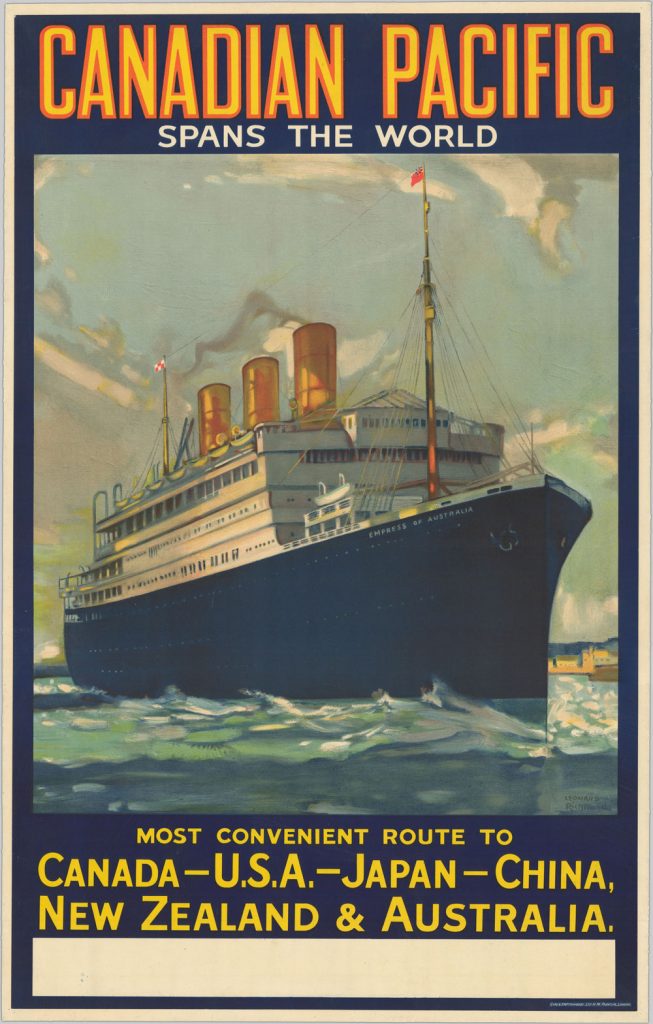 Here is a poster advertising Canadian Pacific Steamships with a starboard-bow view of the Empress of Australia (1921).

“Canadian Pacific spans the world” was one of CP’s advertising slogans. It is written on posters, maps, souvenirs, and even laundry bags. 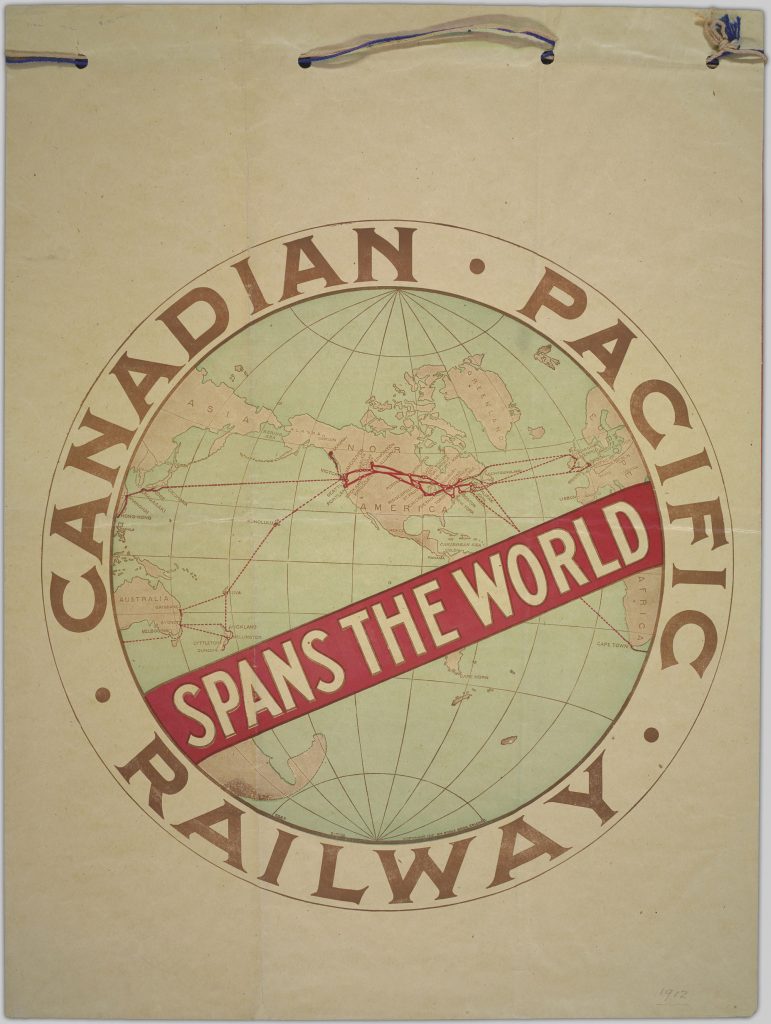 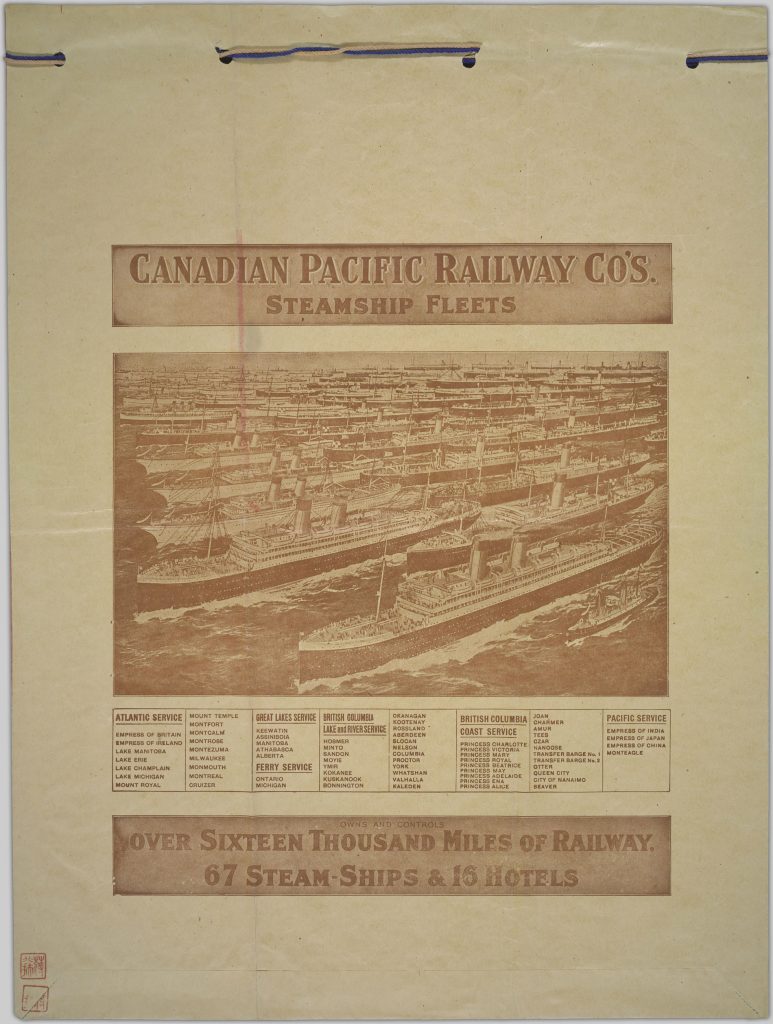 Canadian Pacific Railway’s business ranged from railways to steamships to hotels. To promote its business, CPR issued a variety of pamphlets. Some pamphlets are in very interesting forms, such as diaries.

There are a series of pamphlets entitled “Diary of my voyage to Canada” issued by Canadian Pacific Steamships Company in the Chung collection. With one blank page for the diary entries at the beginning, these pamphlets feature brief articles and illustrations relating to places and life in Canada, with an emphasis on CPR services, such as trains, hotels, and summer camps. 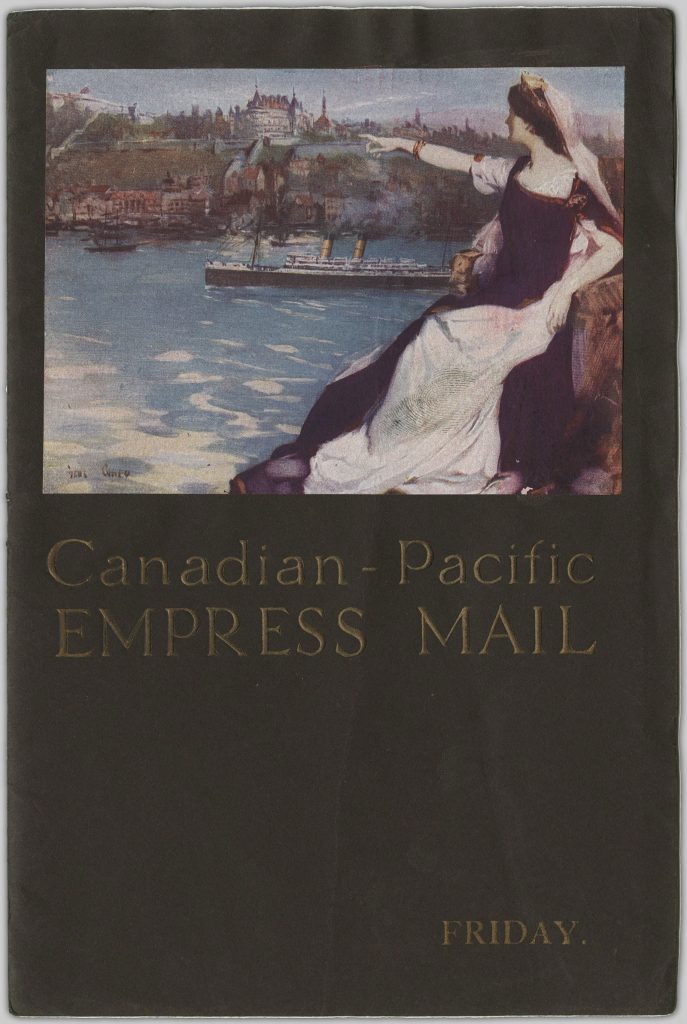 This is a pamphlet about a Canadian trip issued to passengers of the RMS (Royal Mail Ship) Missanabie. Missanabie was an ocean liner built in 1914. It sailed between England and North America. On Sep. 9, 1918, it was torpedoed and sunk by a German submarine with the loss of 45 lives. 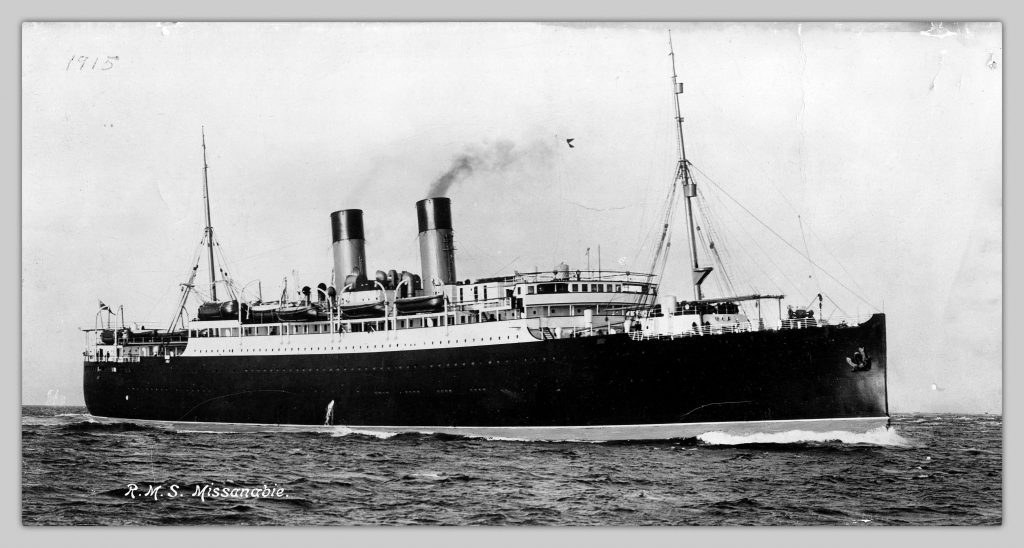 This page is from “Diary of my voyage to Canada: Tuesday” issued on the Empress of Britain. It promotes trips in the Canadian Rockies. 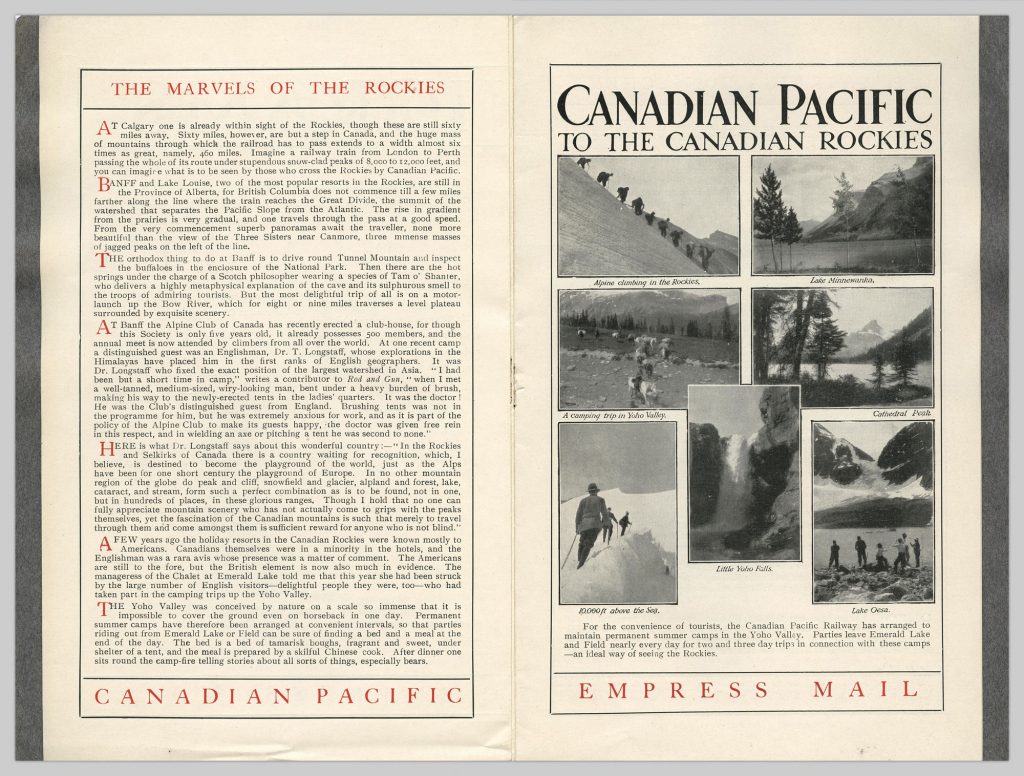 The two central pages of each pamphlet are “Marconigrams”, Marconi Company’s wireless press of global news. 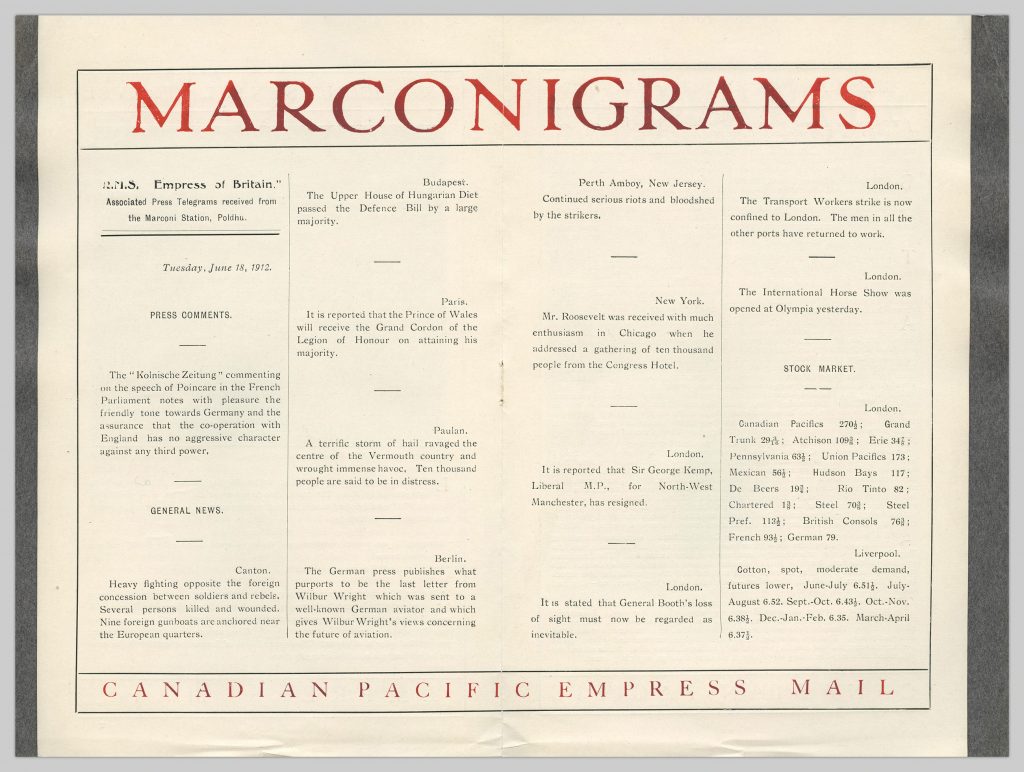 There are 13 pamphlets of this kind in the Chung collection. Click here to explore more.

This pamphlet has a very descriptive name, “A package of post cards and a ‘wireless’: a bride’s story.” It was published in 1907 by Canadian Pacific Steamships to promote sister ships RMS Empress of Ireland and RMS Empress of Britain. 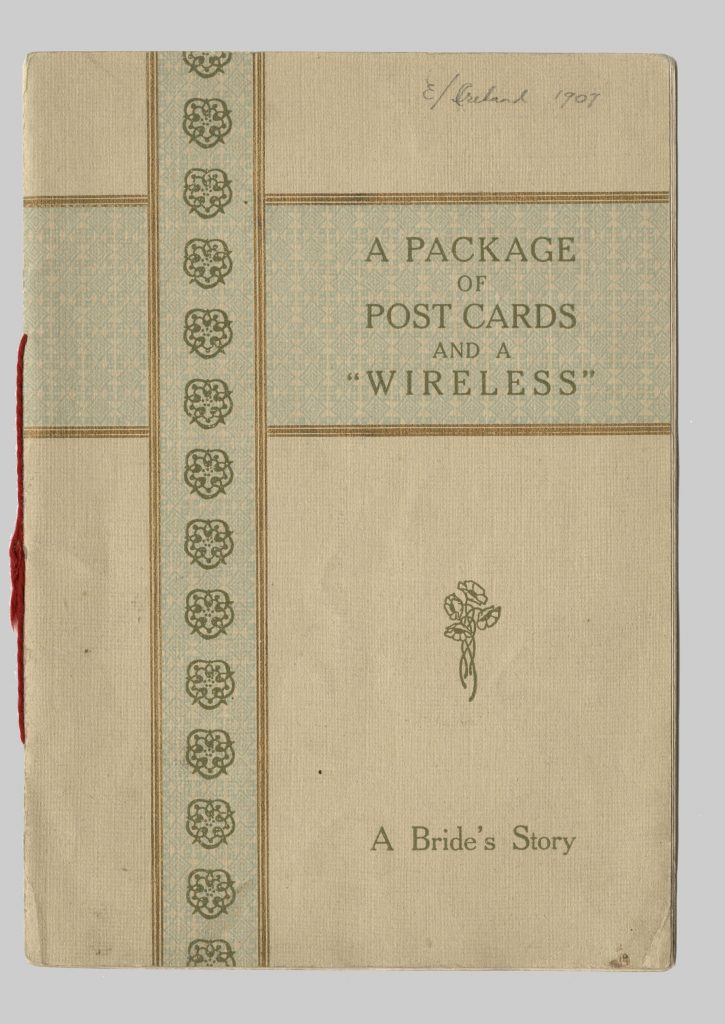 The story is told in the forms of postcards and a wireless message sent by the bride Kate to her mother during her honeymoon. The first postcard was sent from Place Viger Hotel, a combination of a hotel and railway station built by the CPR in Montreal. 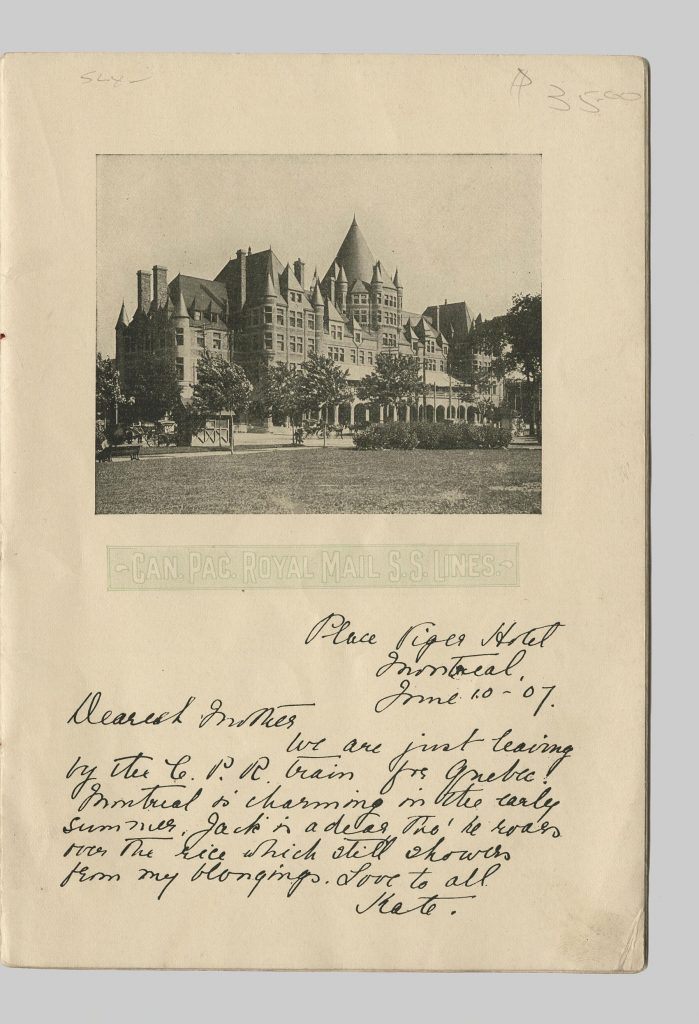 After staying three days at the Chateau Frontenac, which was built and operated by the CPR, the couple took the RMS Empress of Ireland to Liverpool. 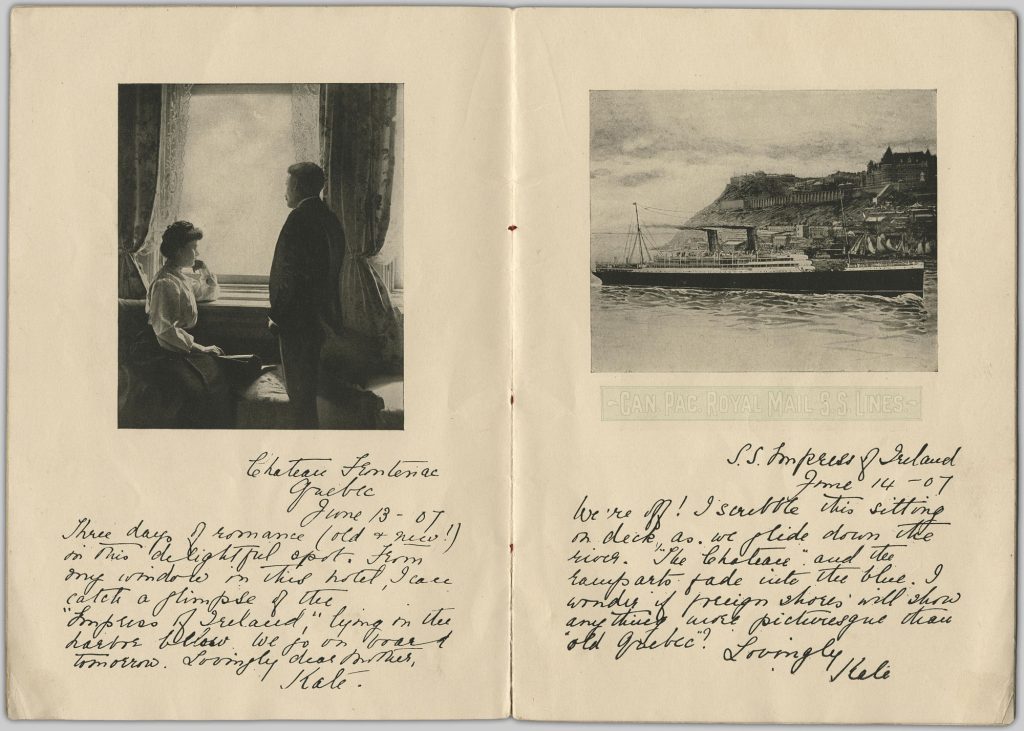 The RMS Empress of Ireland was an ocean liner that sank near the mouth of the Saint Lawrence River following a collision in thick fog on May 29, 1914. It took 1,012 lives and was the worst peacetime marine disaster in Canadian history. 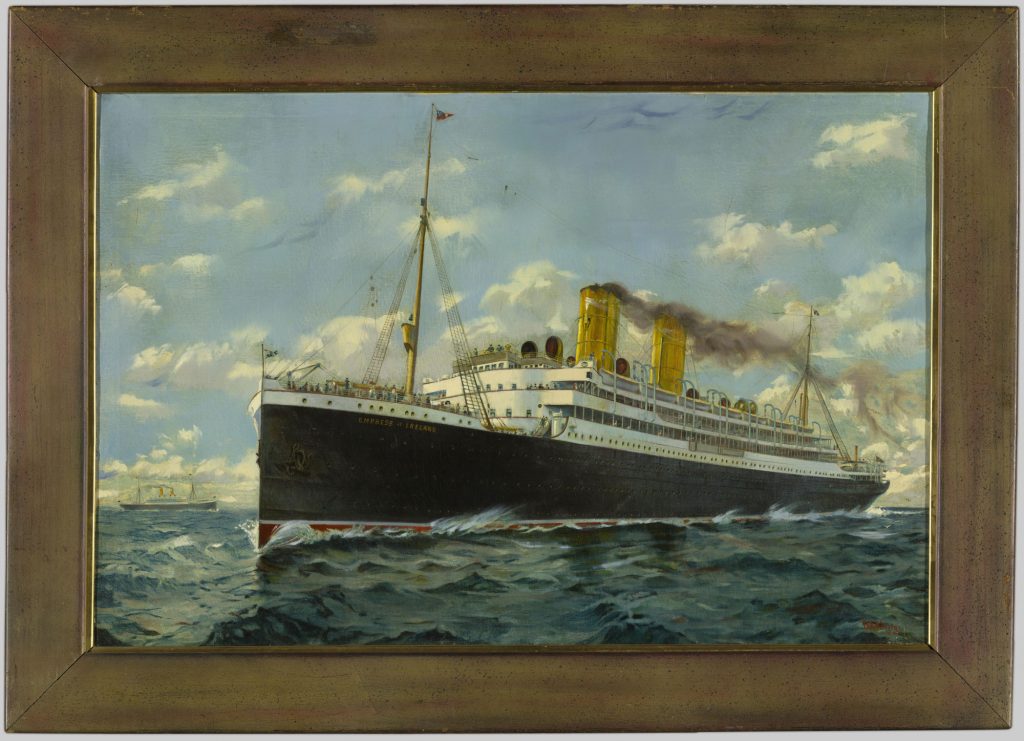 The Chung collection also contains some objects salvaged from the wreckage of the Empress of Ireland. Click here to explore these objects.