In a previous post, we introduced some maps from the Japanese Maps of the Tokugawa Era Collection. UBC Library’s Rare Books and Special Collections holds one of the world’s largest collections of maps and guidebooks of the Japanese Tokugawa period, ca. 1600-1868. This collection does not consist simply of maps of Japan. It also has maps and books about various peoples and countries of the world.

In this post, we will explore a few guidebooks in the collection that depict the outside world. Despite the isolationist foreign policy during the Edo period, the Japanese people were fascinated by different peoples and cultures and were keen to know more.

This work is about a Japanese sailor’s adventure. Hatsutarō was working on Eiju Maru, a Japanese shipping vessel. In 1841, he and twelve other members of the crew were blown out to sea. After months of drifting, they were rescued by a Spanish ship and brought to Lower California. Hatsutarō lived and worked there for seven months, and went back to Japan in 1843. As soon as he arrived, the local lord ordered two scholars and a painter to write down his journey in America.

The book is a four-volume manuscript with numerous coloured drawings, covering American people’s appearances, social customs, clothing, houses, and so on, from a Japanese sailor’s perspective. 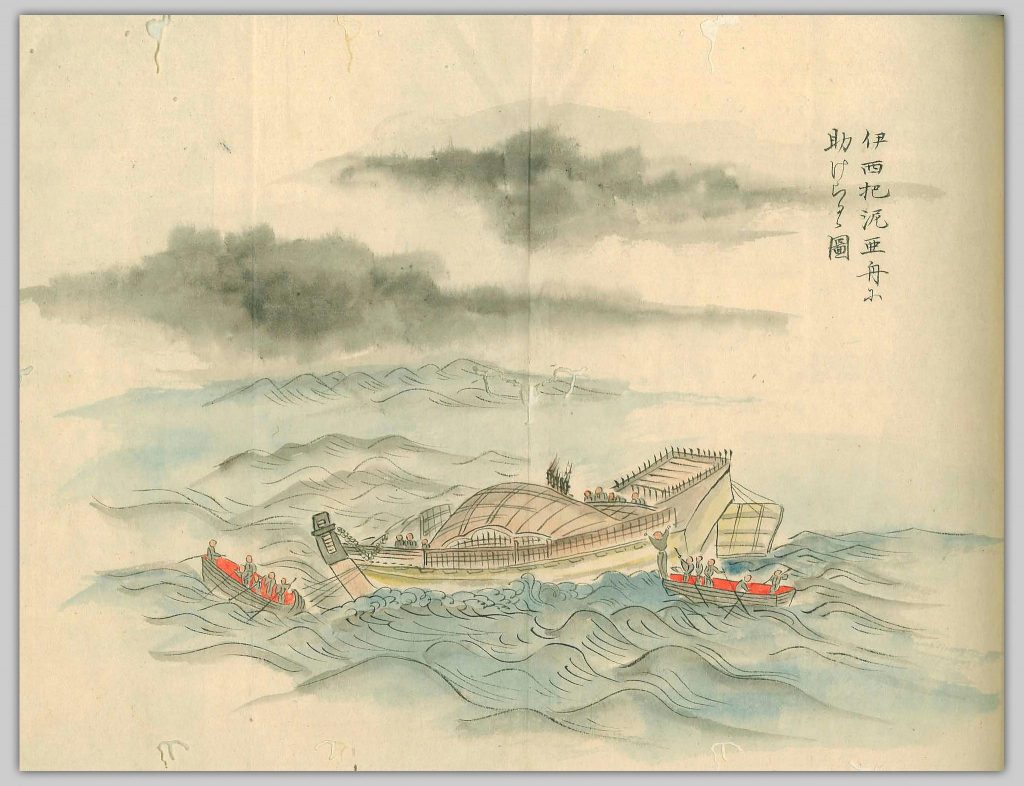 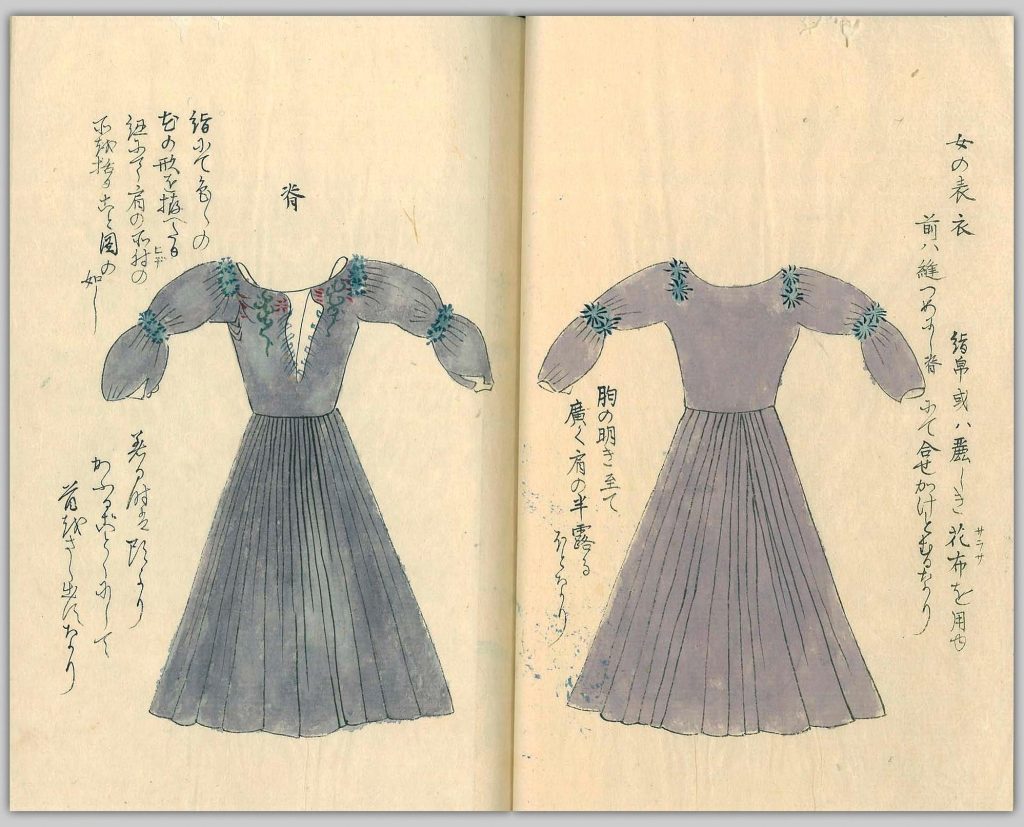 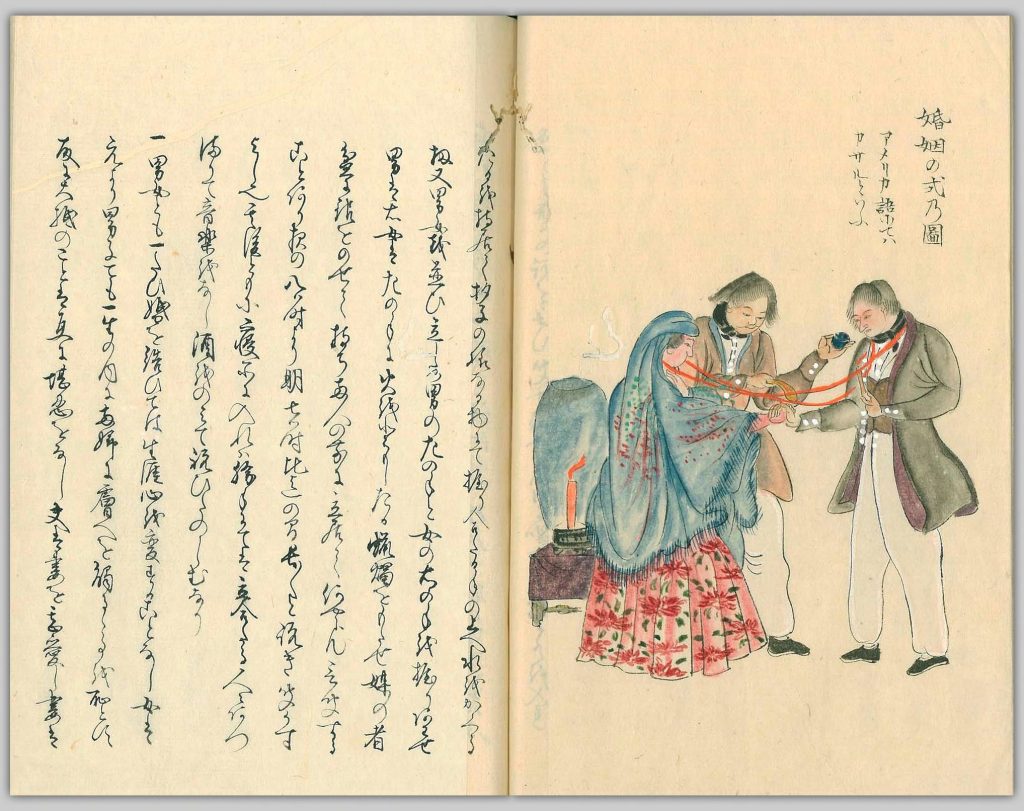 Notice that the drawings were done by Tsurana Morizumi (守住 貫魚), a painter who never traveled abroad. Like many other images about foreigners in the Edo period, these drawings are a mix of imagination, creativity, hearsay, and observation.

This is a book of drawings, edited by Tagawa Harumichi (田川 春道) and illustrated by Kurata Tōgaku (倉田 東岳). There are two volumes, consisting of illustrations and brief explanations of people from 42 countries in Asia, Europe, Africa, and North and South America. It reveals a Japanese view of foreign people of that period. It was published in 1855, two years after the American Black Ships forced the opening of Japan to America and the end of National Isolation policy in 1853.

Below are two leaves from the second volume of the book. Can you tell they are people from Nova Scotia and Italy? 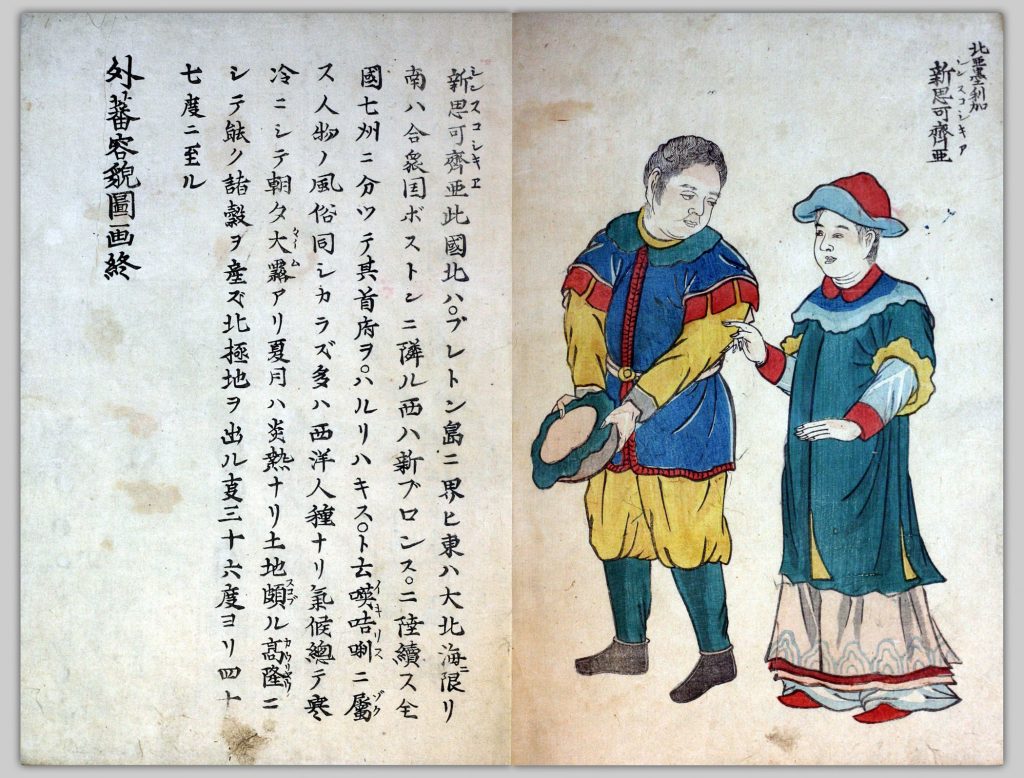 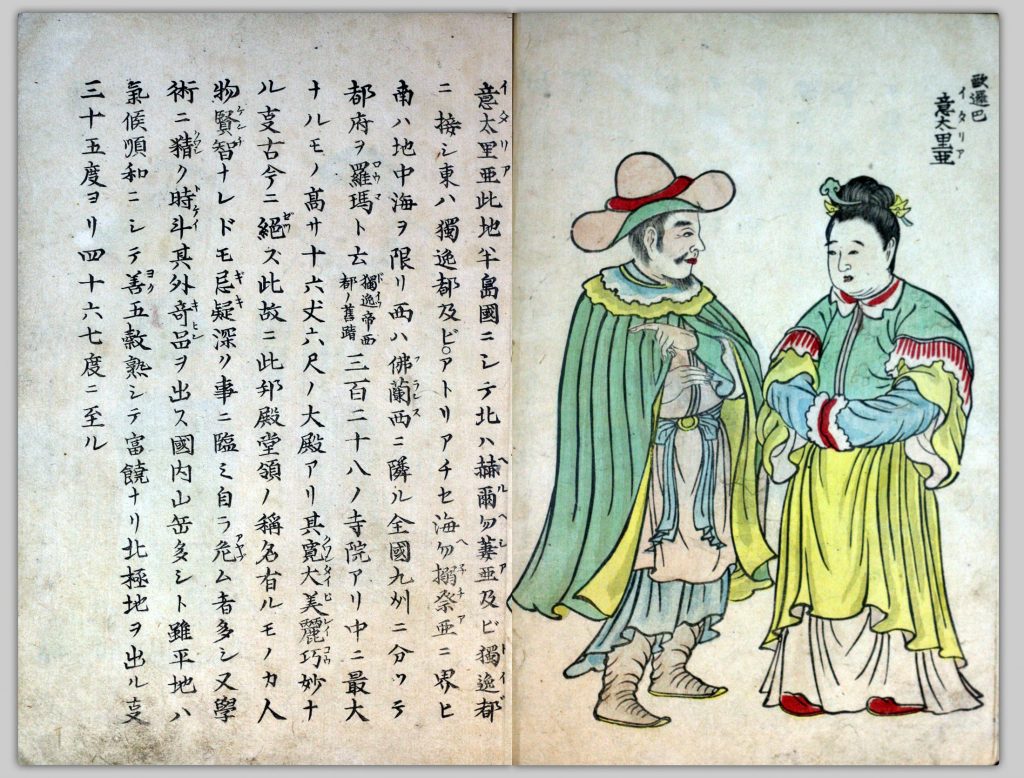 This may be the first printed Japanese book exclusively about the geography and history of North and South America and consists of five volumes. In volume 1, there are four maps showing the Eastern and Western hemispheres and North and South America. In volume 2, there is a map of the then-existing 31 states of the United States. There are also illustrations through the five volumes. This book was also published in 1855. 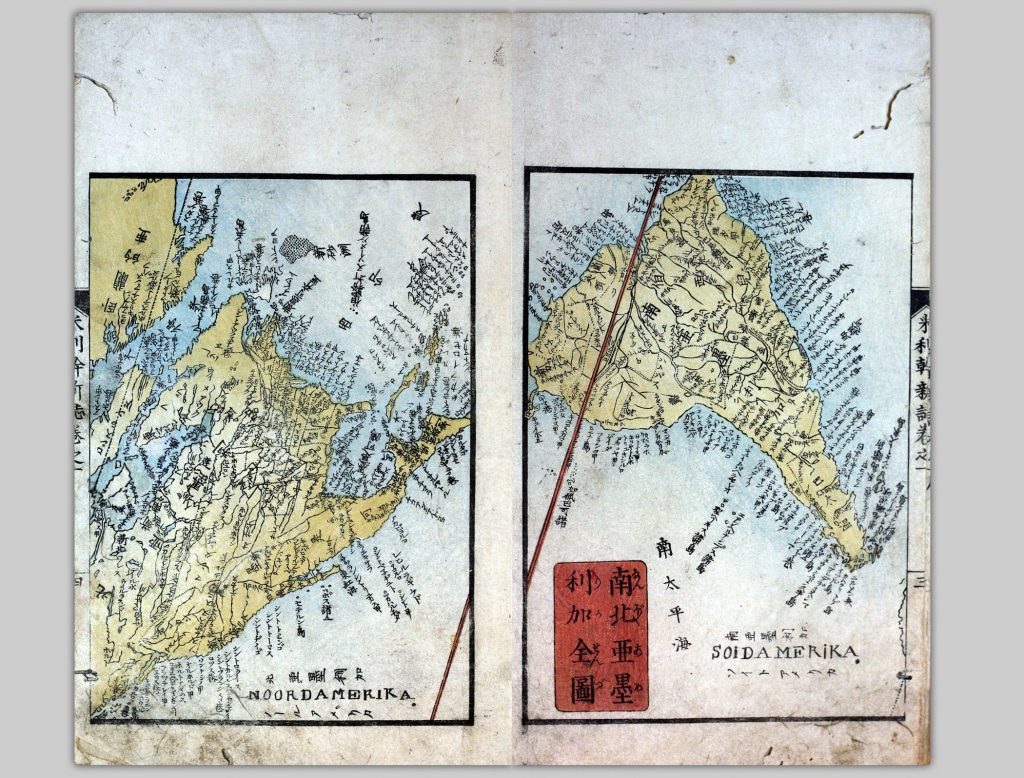 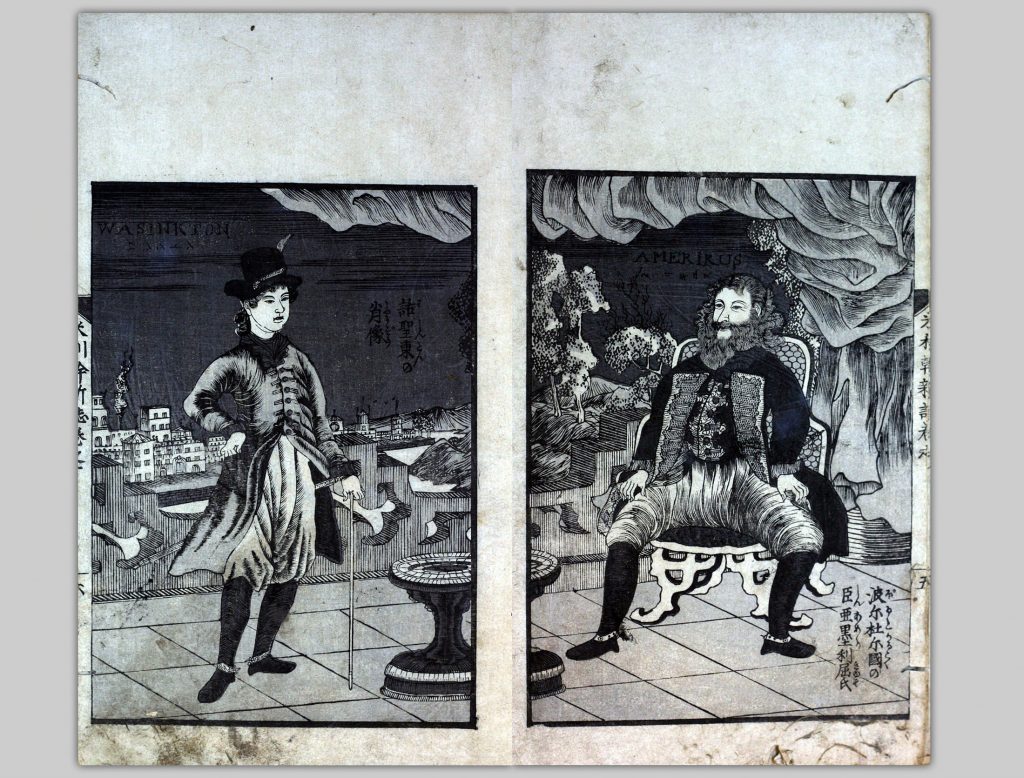 The author, Shigenobu Tsurumine(鶴峯 戊申, 1788-1859), was a well-known scholar of Japanese classics who was also interested in western technology. His work Gogaku shinsho  語学新書 [New Book on the Study of Language ] was the first book of Japanese grammar based on western grammatical rules and conceptions.

To learn more about the Japanese Maps of the Tokugawa Era Collection, please check out our previous post, and the website of ASIA453, a course on Japanese Travel Literature held by UBC’s Asian Studies Department.