This two-part series features some of the earliest Canadian Pacific Railway (CPR) hotels in British Columbia. Many of these hotels have since closed down but formed an important part of early Canadian railway history. In previous blog posts, we profiled the two largest surviving CPR hotels in B.C.: Hotel Vancouver and the Empress Hotel.

Mount Stephen House, Glacier House, and Fraser Canyon were the first three hotels developed by Canadian Pacific Railways in BC. Because it was difficult to bring dining cars through mountainous areas, the hotels were initially intended as “dining stations”. These three “chalet” style hotels were designed by the architect Thomas Sorby and had very similar designs, each with six or seven bedrooms.

Mount Stephen House was a small hotel located in Field, British Columbia. Shortly after opening in the fall of 1886, it was described in a Canadian Pacific Railway pamphlet:

The Mount Stephen house, a pretty chalet-like hotel, is situated fifty miles west of Banff, in Kicking Horse Canon, at the base of Mount Stephen — the chief peak of the Rockies in this latitude, whose stupendous mass is lifted abruptly 8,000 feet above. This is a favorite stopping-place for tourists and mountain climbers, and there is good fly fishing for trout in a pretty lake nearby, and “big horns” and mountain goats are found in the vicinity…This is a favorite region for artists, the lights and shadows on the near and distant mountains giving especially interesting subjects for the brush.

The nearby Mount Stephen was named after George Stephen, the Canadian Pacific Railway’s first president.

Here are some images of the hotel from our collections: 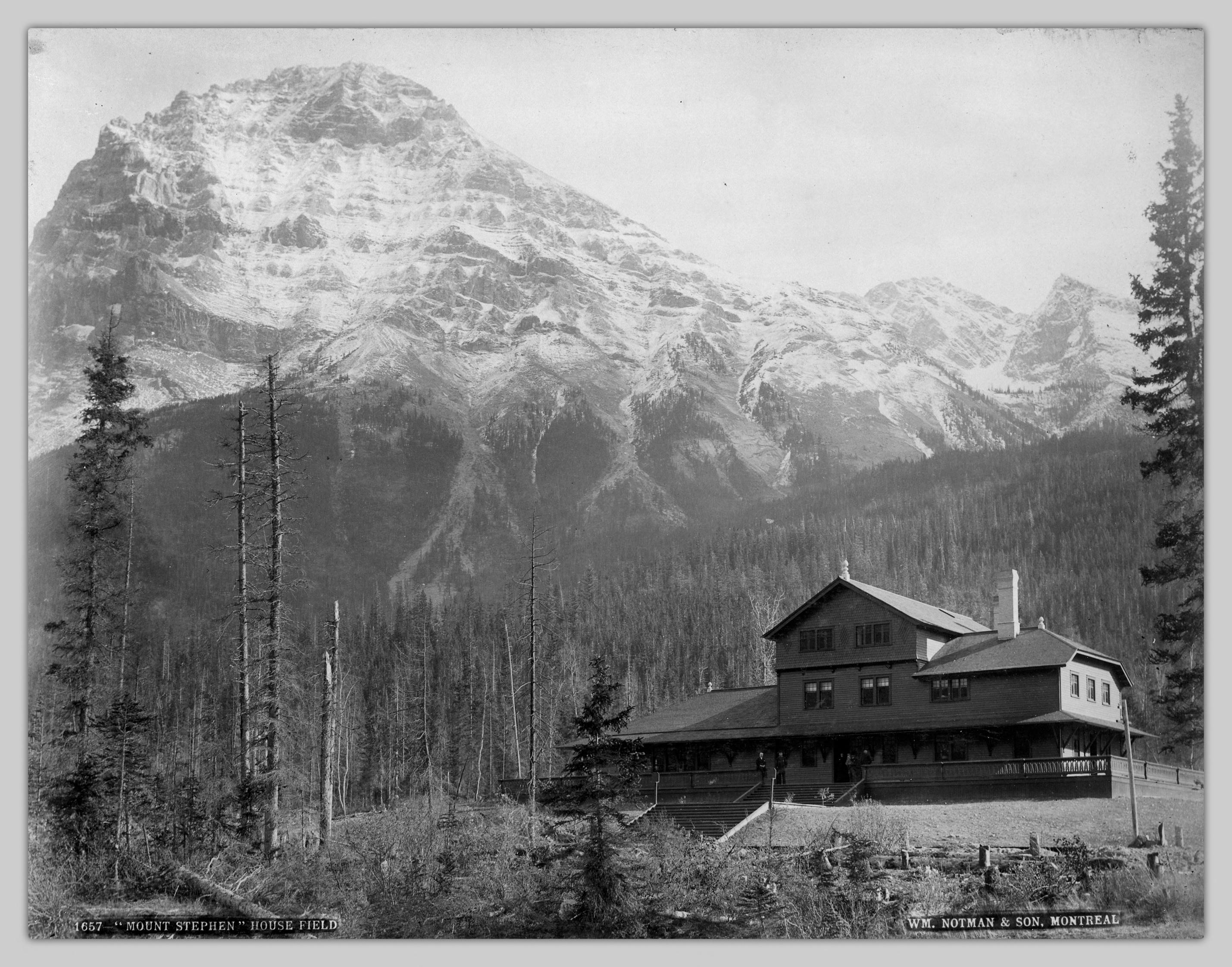 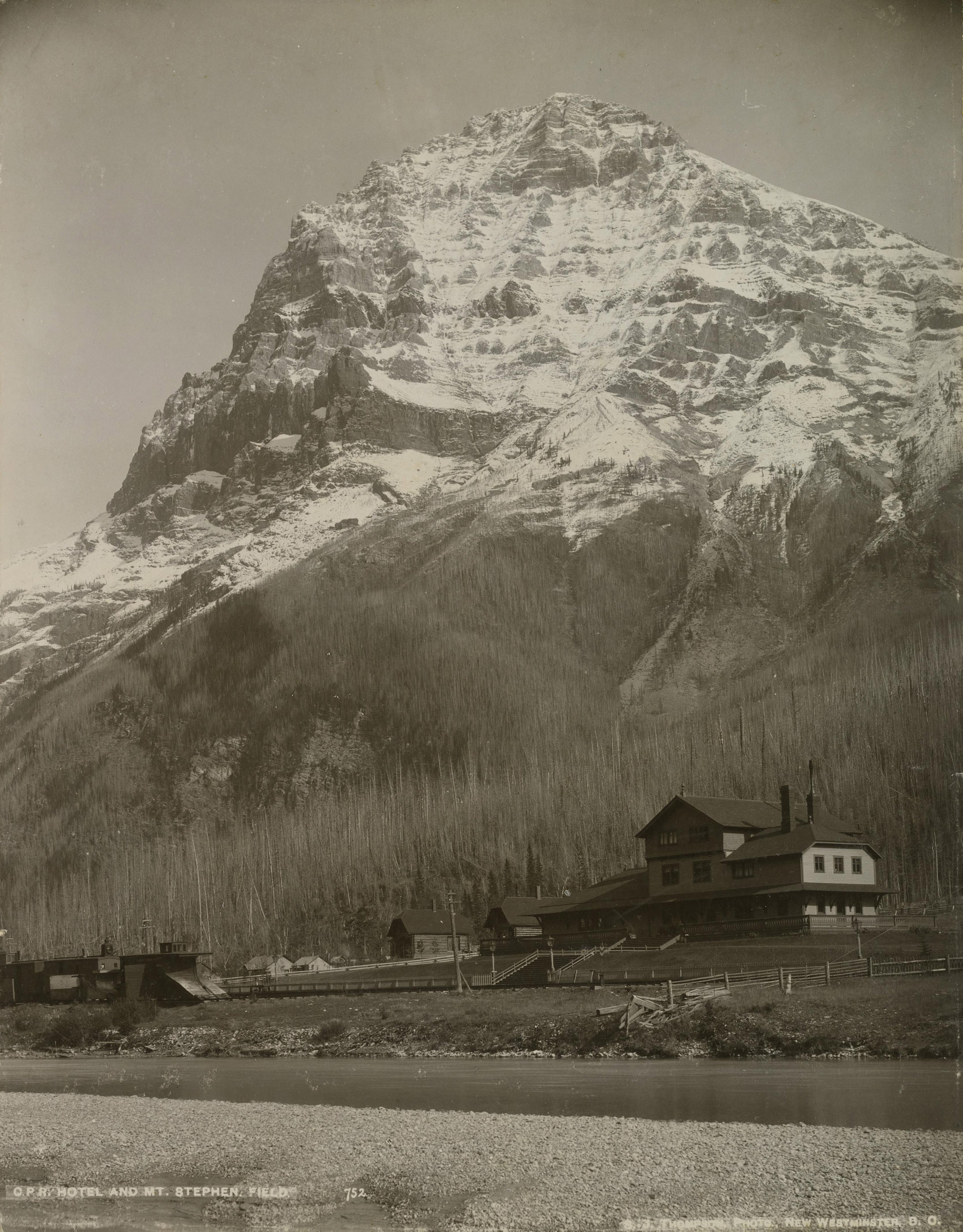 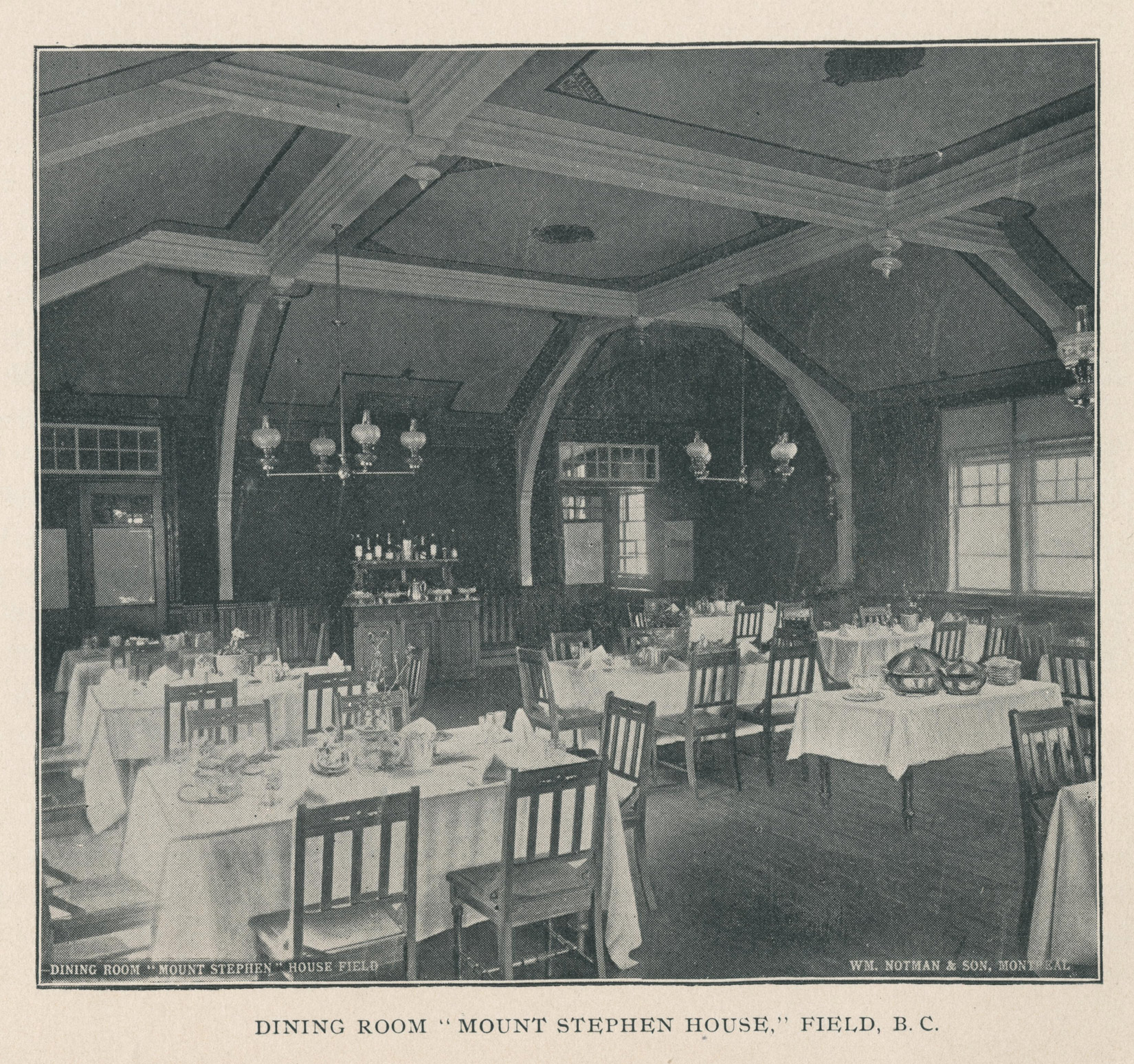 Mount Stephen House was expanded in 1901-1902 to accommodate more guests, as shown in this illustration: 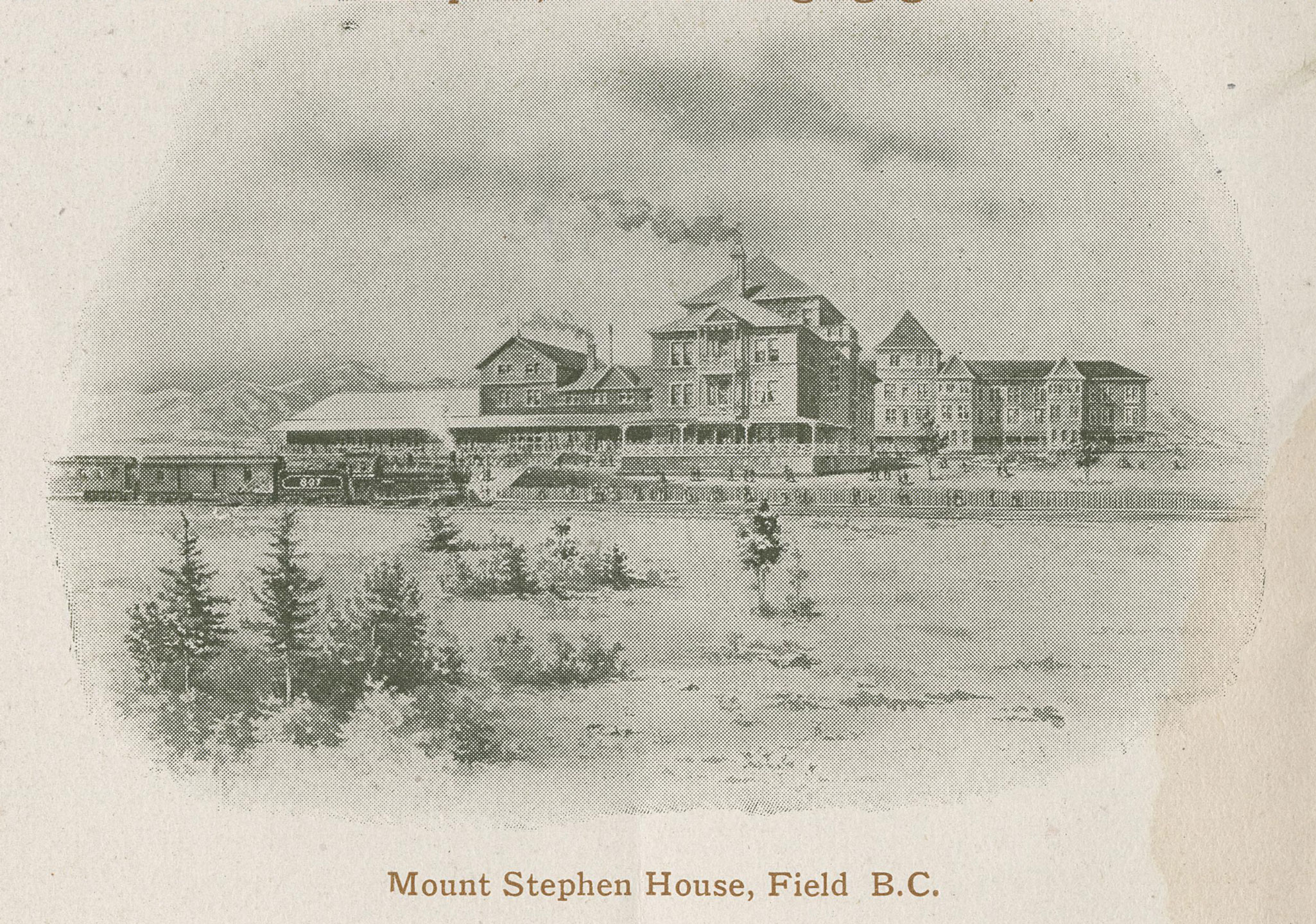 Yoho Valley in the Canadian Rockies and the glaciers of the Selkirks, 1903, p. 4.

This excerpt from a 1903 pamphlet describes the reconstruction, designed by Francis Rattenbury—the same architect who designed the Empress Hotel:

The increasing popularity of Field, as its attractions have become better known, necessitated greater accommodation than the old Mt. Stephen House afforded. The result has been the erection of a new chalet hotel of the same name with much greater accommodation, suites of rooms with private baths, billiard room and the same admirable service which is characteristic of the Canadian Pacific Mountain hotels. It has a livery in connection where carriages, pack and saddle horses can be secured at moderate rates, and outfits of cooks and porters are also available. There is also a dark room at the disposal of guests for development of photographs. The rates range from $3.00 to $5.50 per day, with special arrangements for those making prolonged visits.

The hotel closed in 1918 and was converted into a YMCA, which was demolished in 1963.

Glacier House opened in summer 1887 in Glacier National Park. Pamphlets in the Chung Collection list the hotel as open seasonally, during the summer months.

Here are some photographs of the hotel: 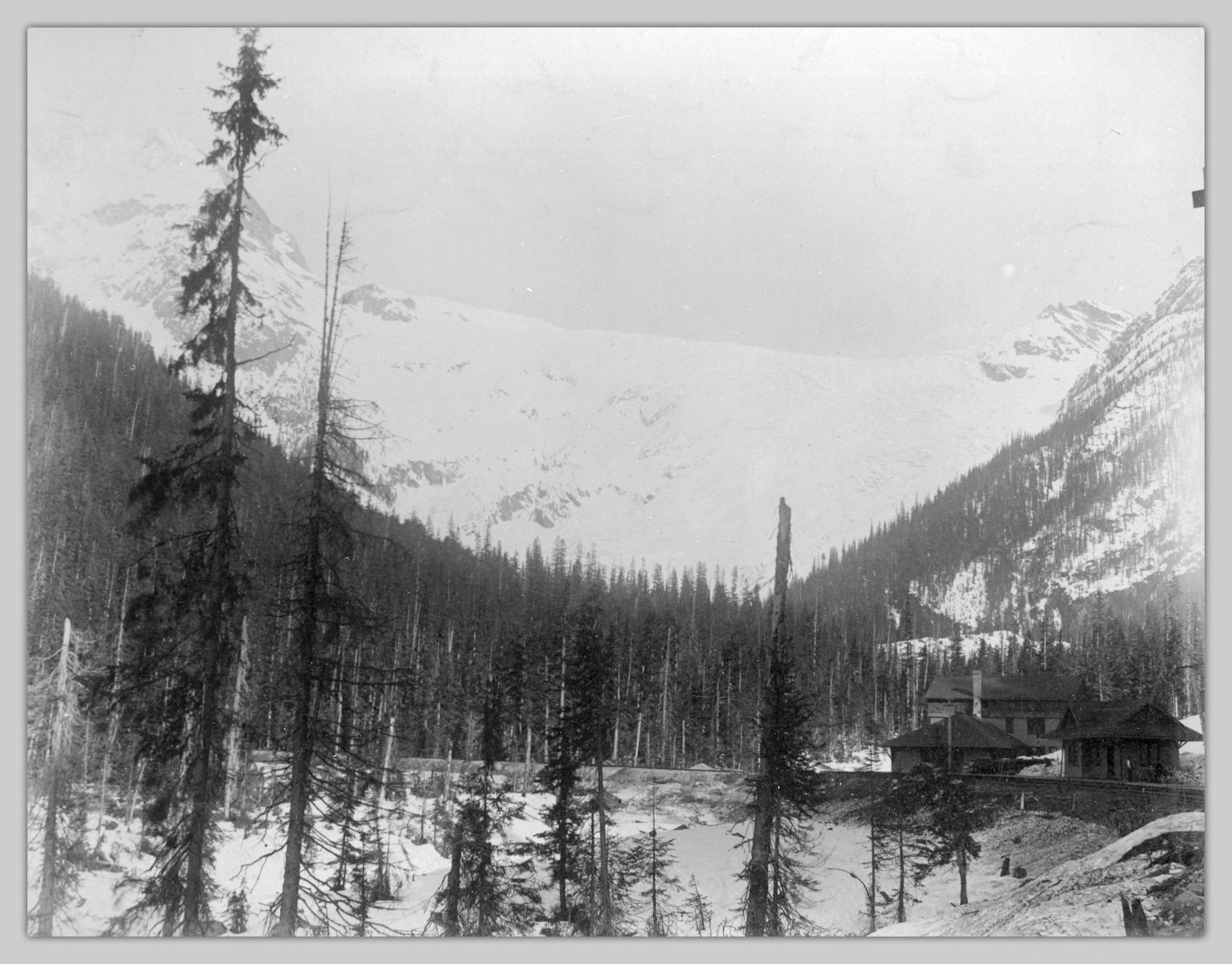 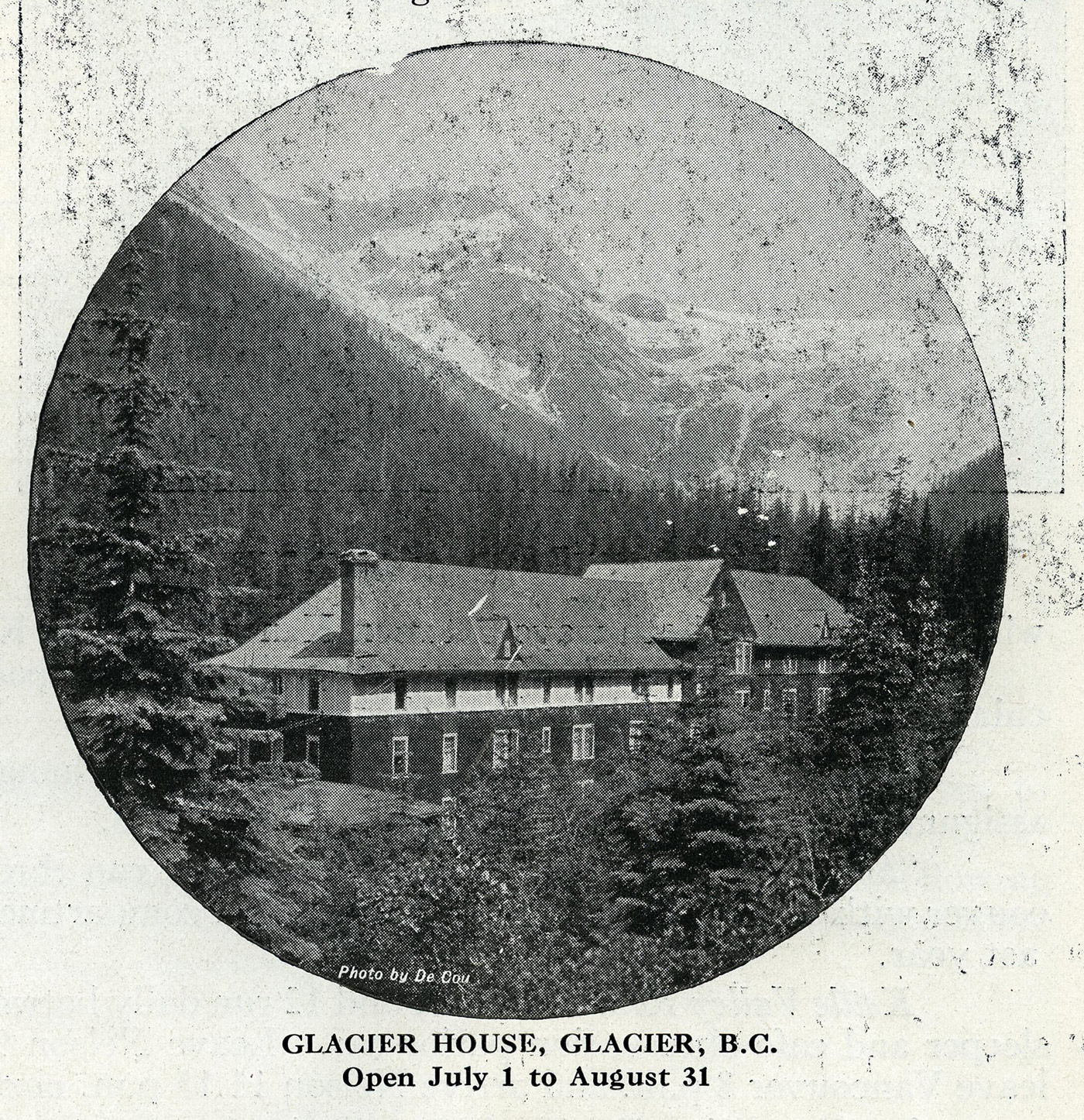 The hotel was surrounded by the beautiful Selkirk Mountains: 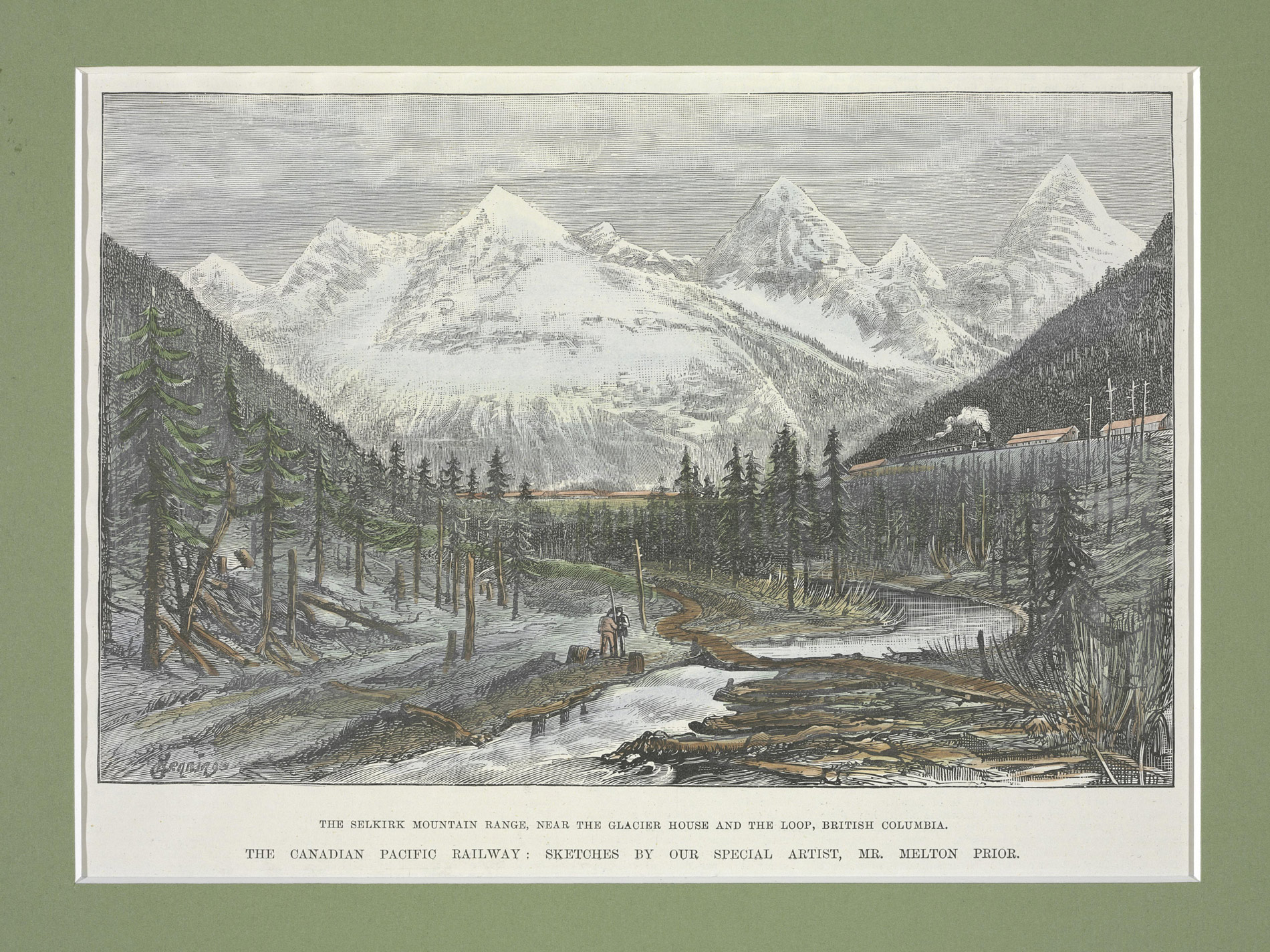 Prior, Melton. The Selkirk Mountain Range, near the Glacier House and the Loop, British Columbia, 1888.

In the 1890s, the hotel hired Swiss guides to show tourists safely through the mountains, pictured here: 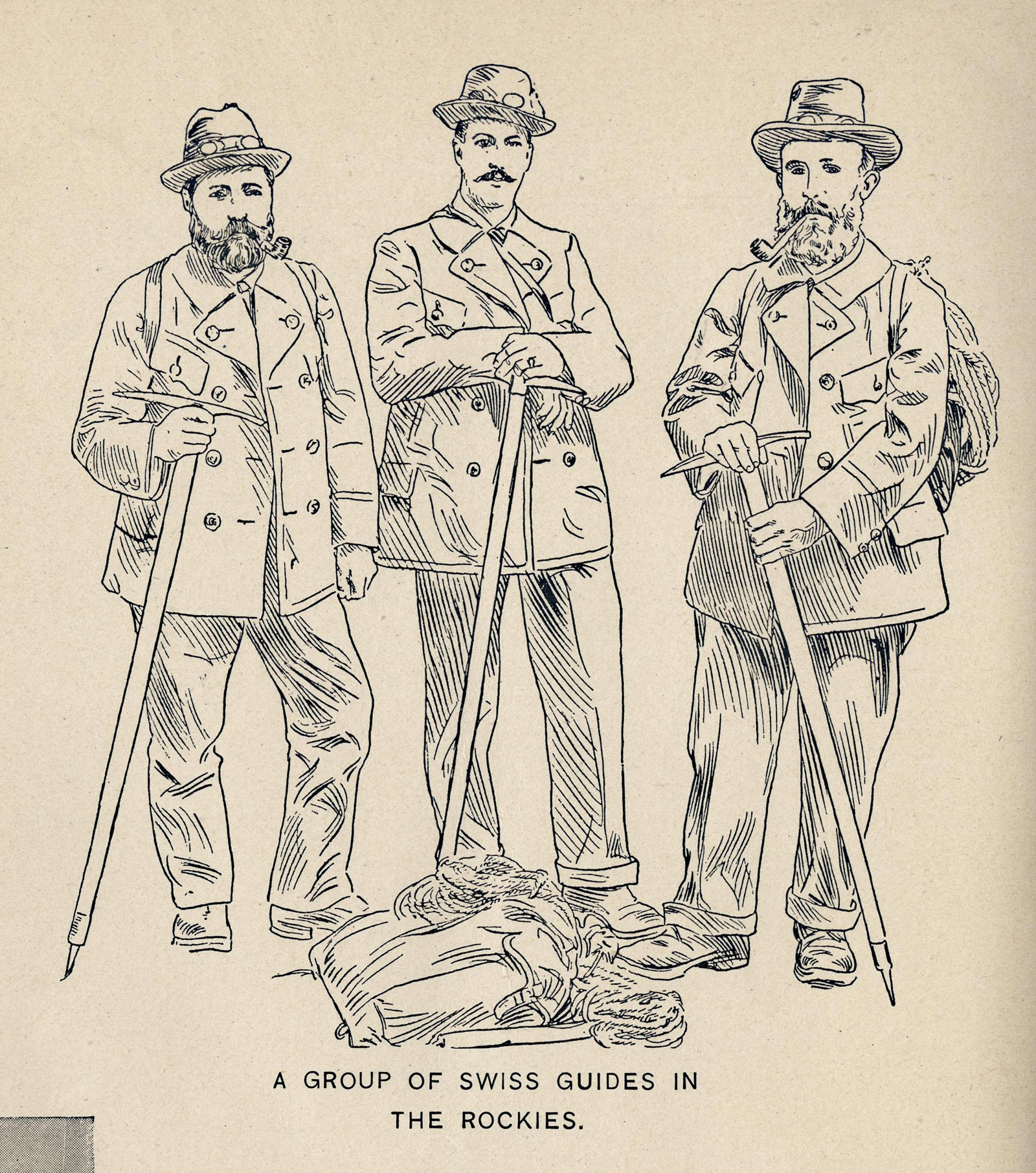 Banff in the Canadian Rockies and the glaciers of the Selkirks, 1890, p. 4.

Guests could participate in “splendid Alpine climbing and glacier exploring, driving, riding, and hiking.” This pamphlet shows some of the activities and sites at Glacier that were advertised to tourists: 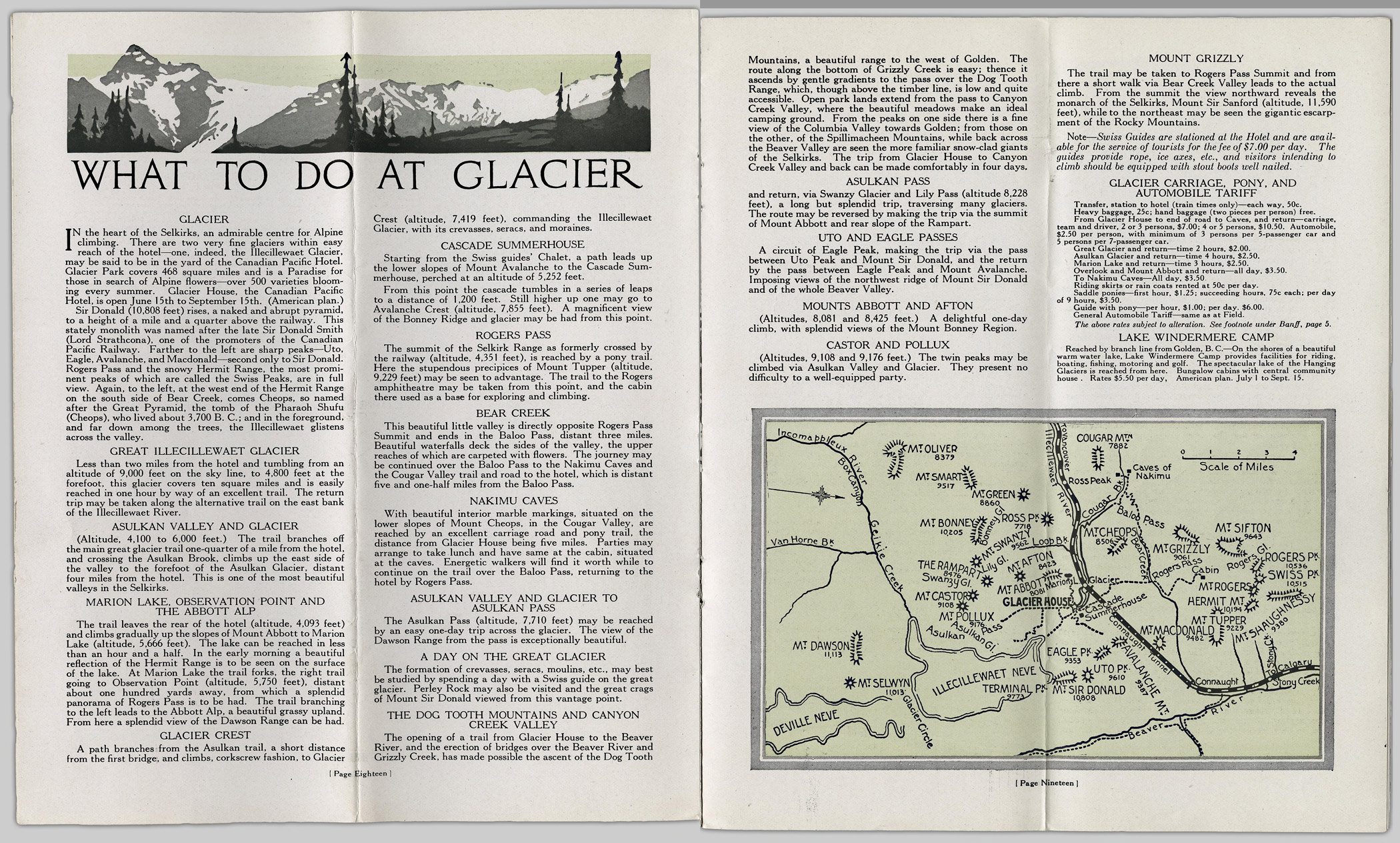 Due to its popularity, Glacier House had to be expanded twice—in 1892 and 1904—to accommodate demand. However, before they could expand the hotel, overflow guests slept in a sleeper car parked outside!

After rail service to the hotel was terminated in 1917, Glacier House closed in 1926, and the building was demolished in 1929.

The western-most of the first three CPR hotels in British Columbia, Fraser Canyon House, opened in summer 1887 in North Bend.

Here is an image of the hotel from a 1904 pamphlet: 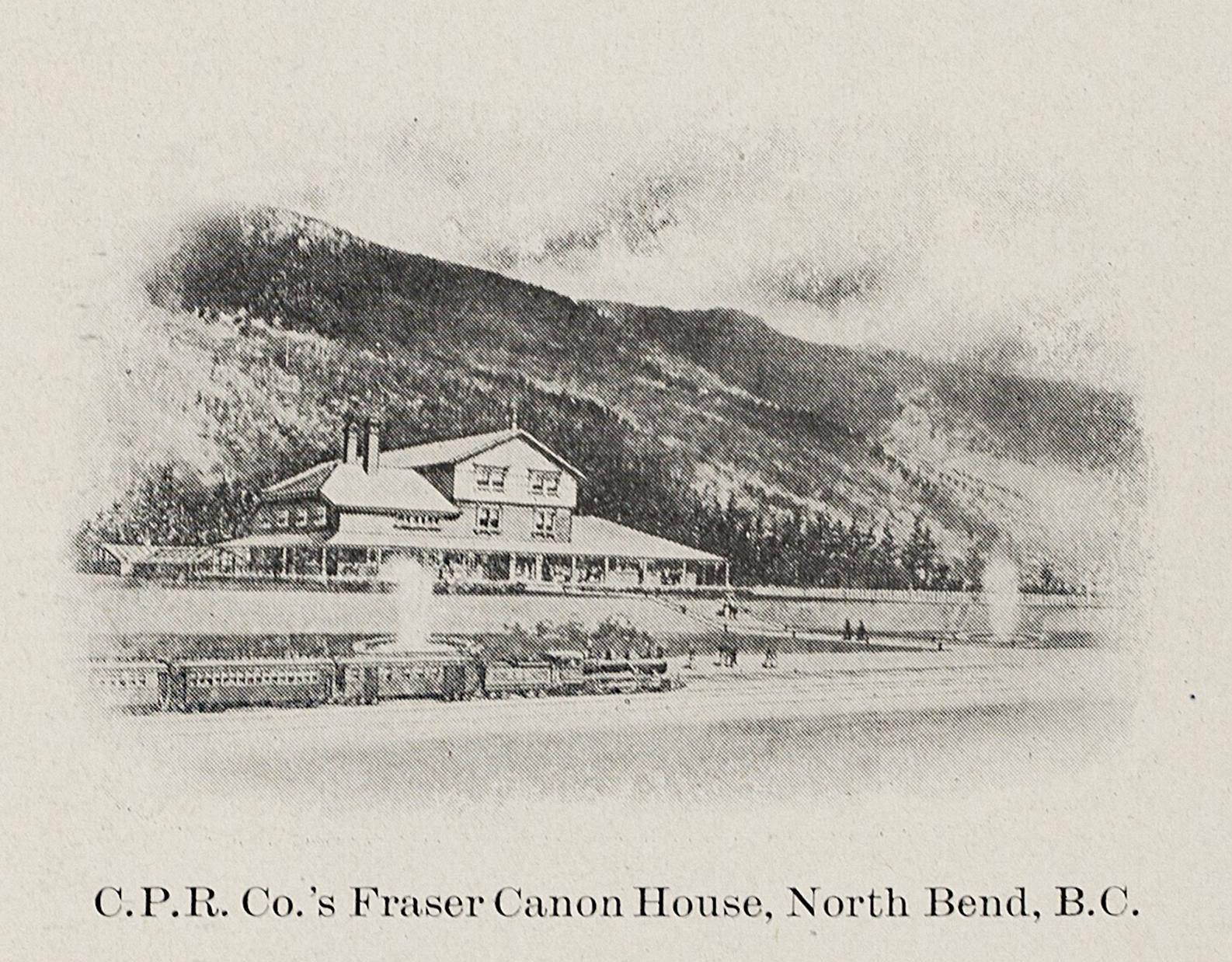 Note that in CPR pamphlets, the hotel’s name sometimes appeared as “Fraser Cañon House” or “Fraser Canon House”; it was later renamed the “North Bend Hotel”.

When researching this blog post, we could find little information on what happened to the Fraser Canyon House, but according to Wikipedia, the original structure burned down in 1927.