This two-part series features some of the earliest Canadian Pacific Railway (CPR) hotels in British Columbia. Many of these hotels have since closed down but formed an important part of early Canadian railway history. You can view Part 1 here. In previous blog posts, we profiled the two largest surviving CPR hotels in B.C.: Hotel Vancouver and the Empress Hotel.

Here is a map showing the route between the two locations: 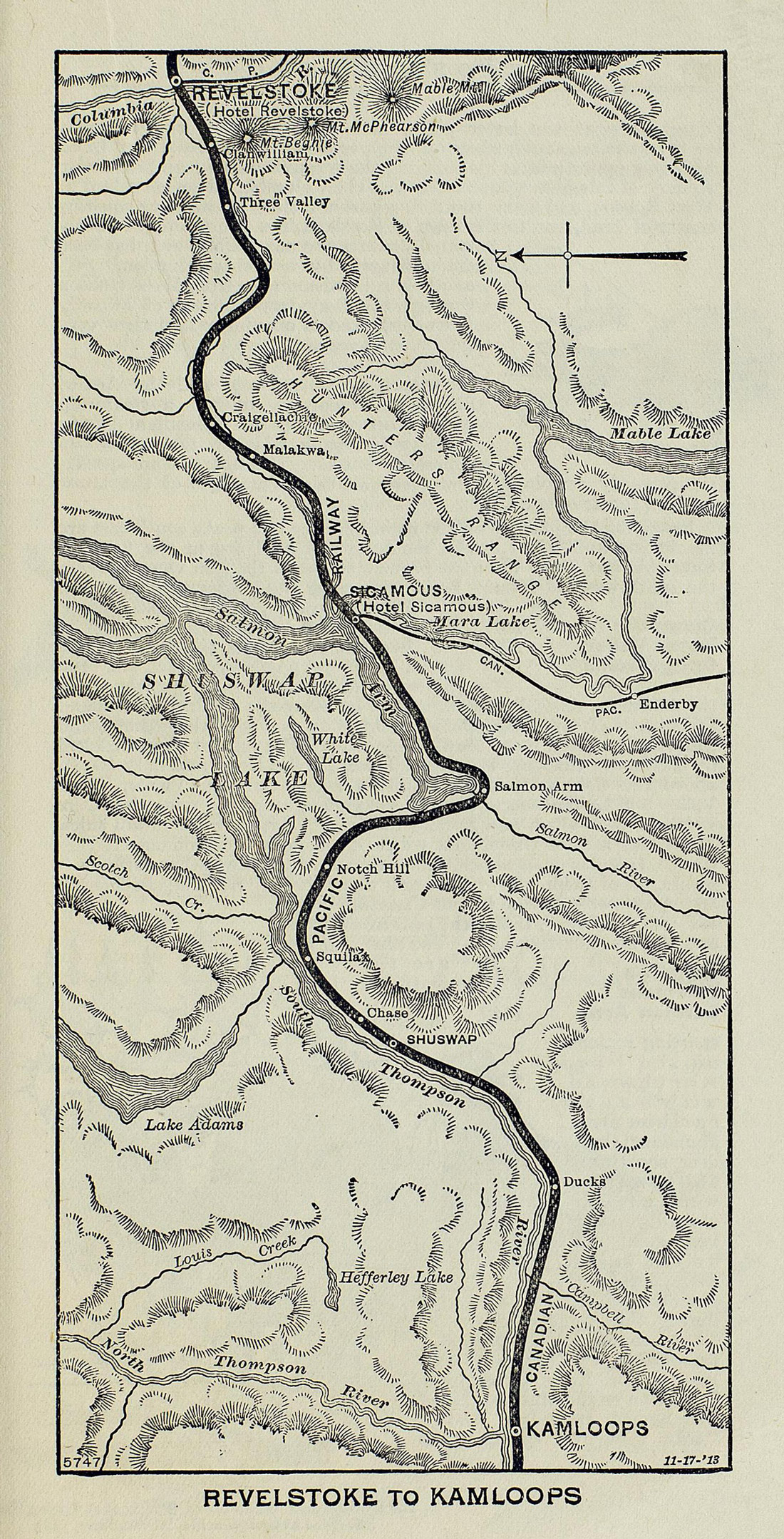 These images from the Chung Collection show Revelstoke, B.C. and the train station: 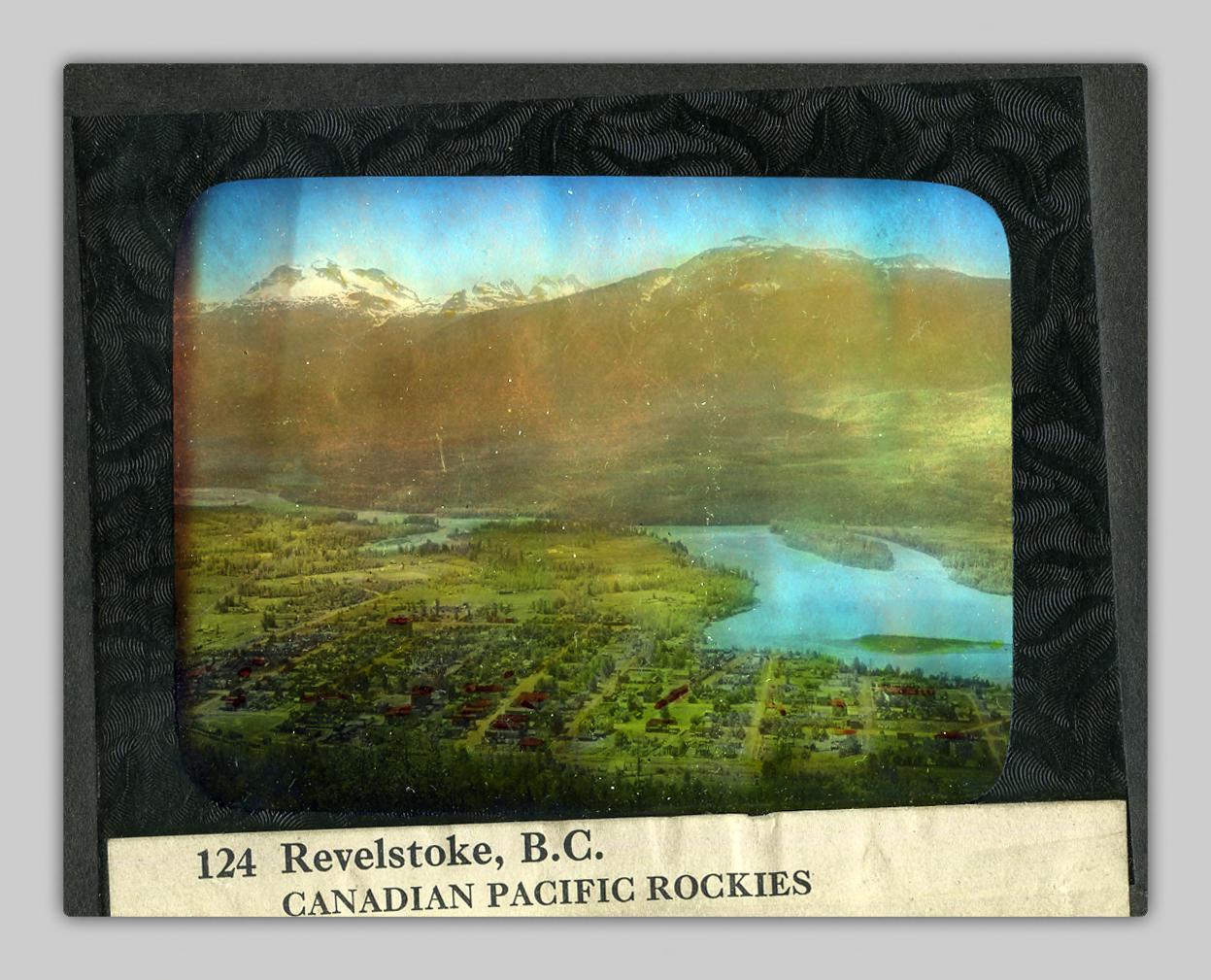 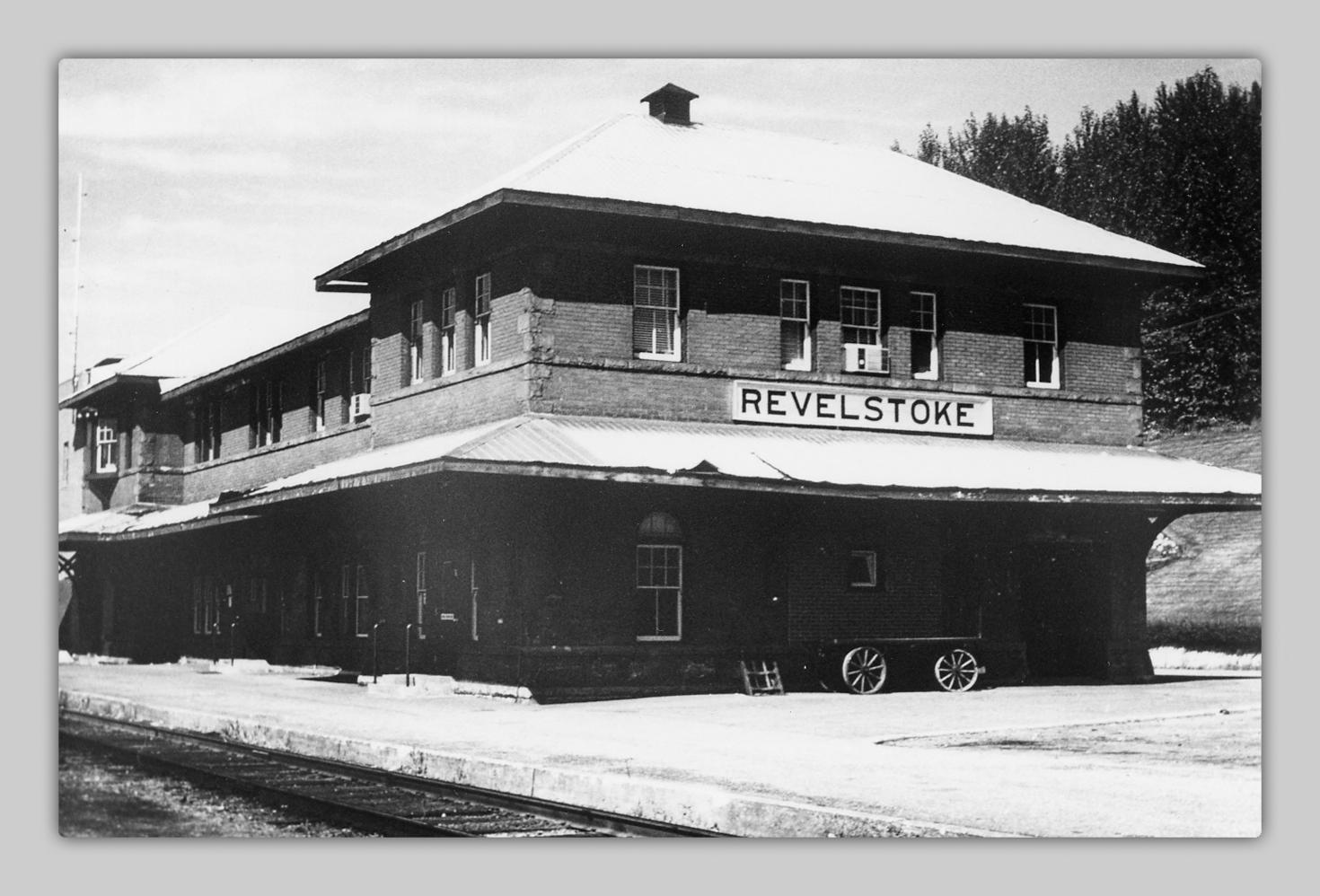 These photographs from the Uno Langmann Collection and the Doug and Joyce Cox Research Collection show Sicamous Hotel and Shuswap Lake: 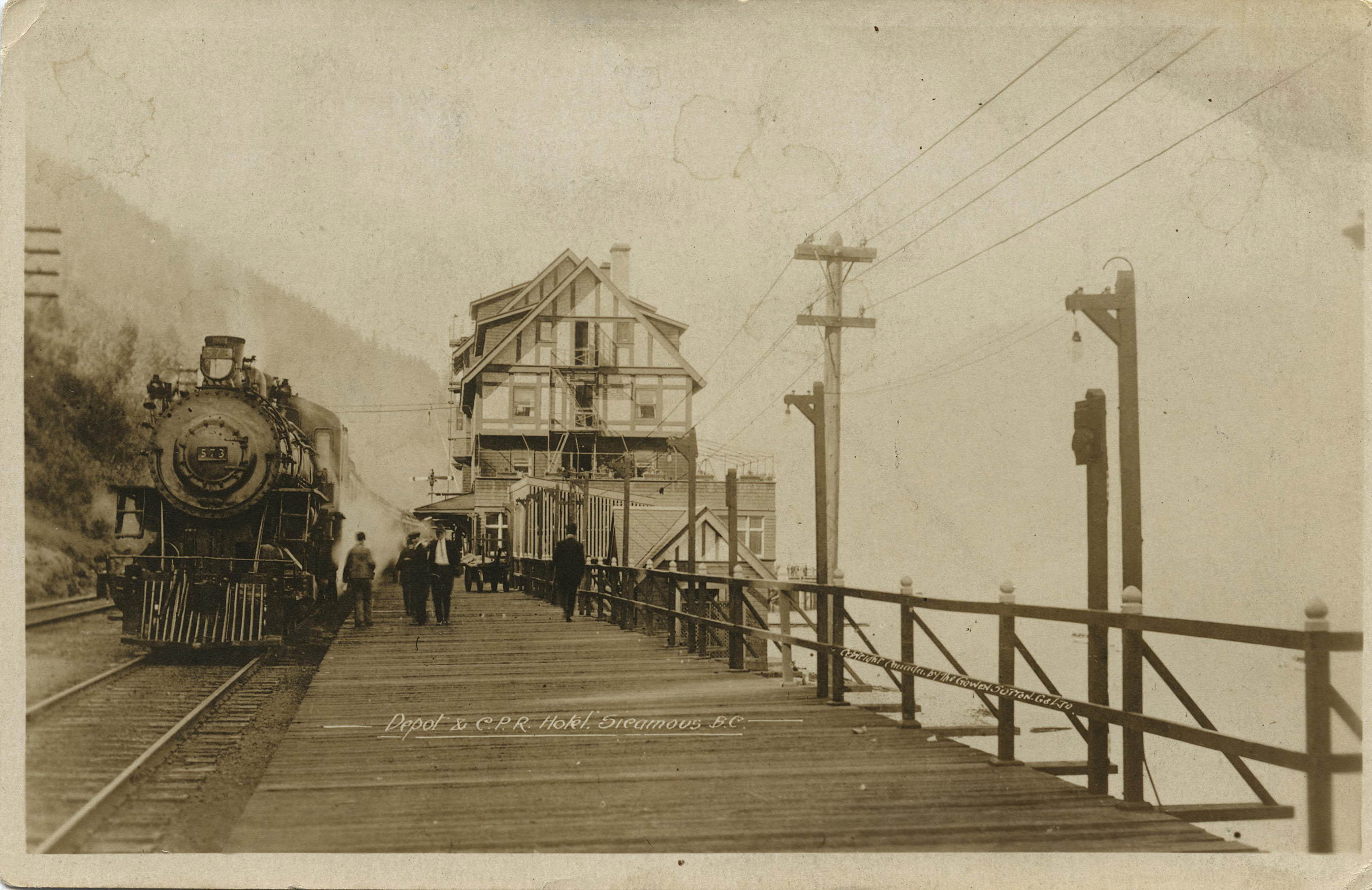 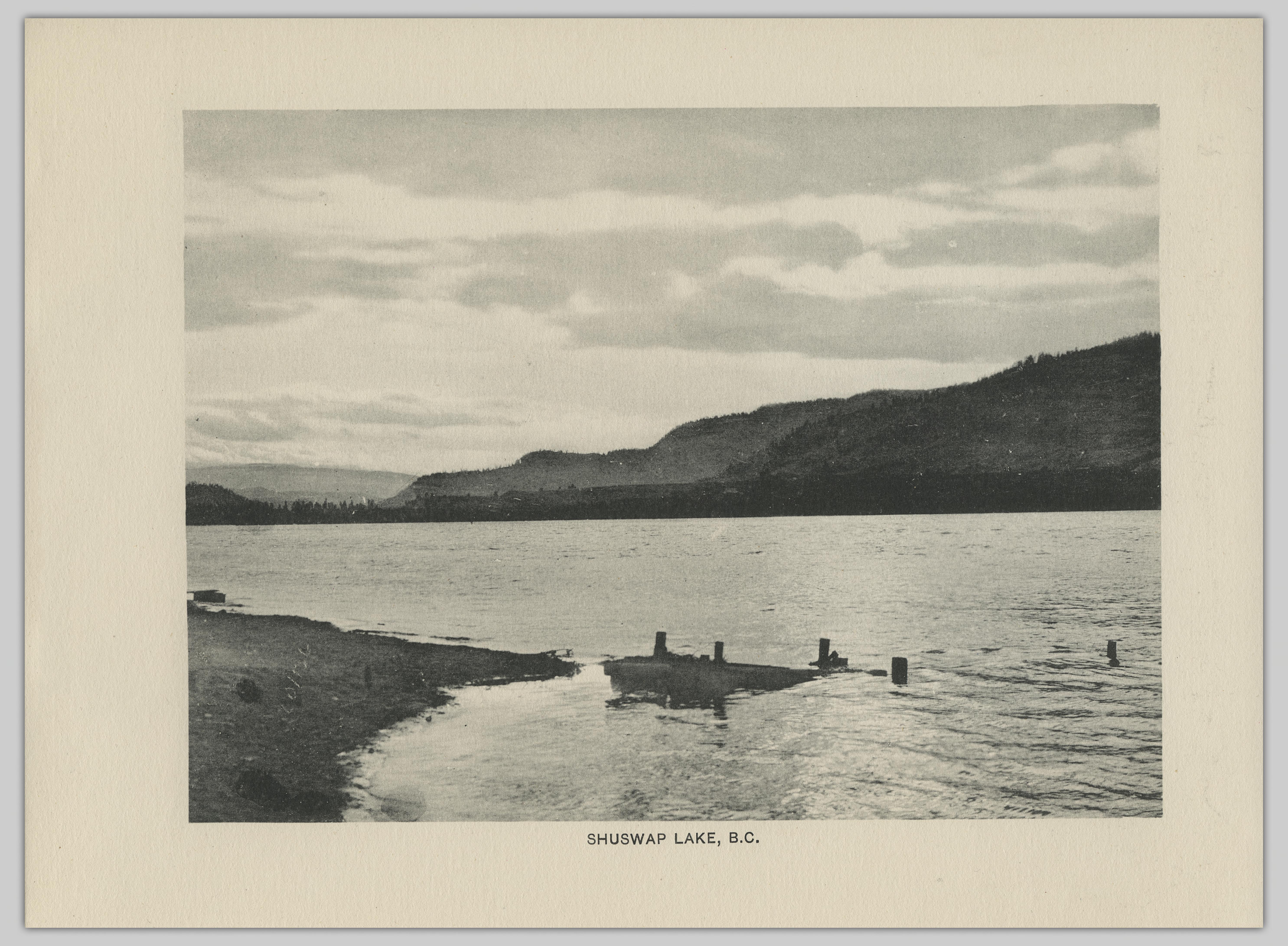 Photo from A series of views illustrating points of interest between Golden and Ashcroft, B.C., including Revelstoke, Kamloops, and Nicola, [1900?].

Through the 1930s and 1940s, CPR hotels leased Sicamous Hotel to another operator. The building was destroyed in 1964. Hotel Revelstoke closed earlier, in 1928.

Located by Emerald Lake near Field, B.C., the Emerald Lake Chalet opened in 1902. According to brochures in the Chung Collection, the hotel only operated during the summer months.

Here is an exterior photo of the hotel: 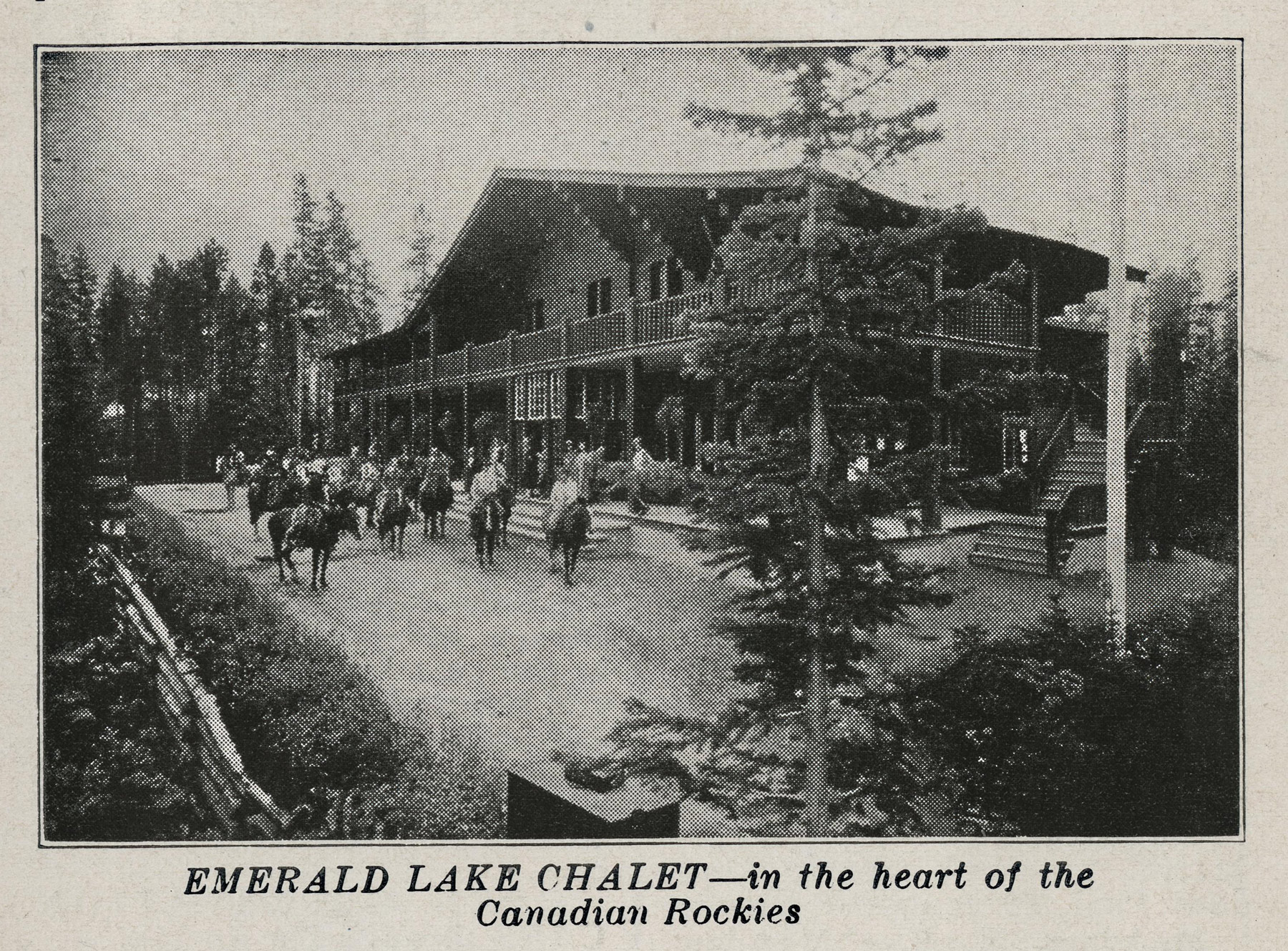 Suggestions for your summer vacation to and through the Canadian Rockies, 1937, p. 2.

This pamphlet features a painting of the lake: 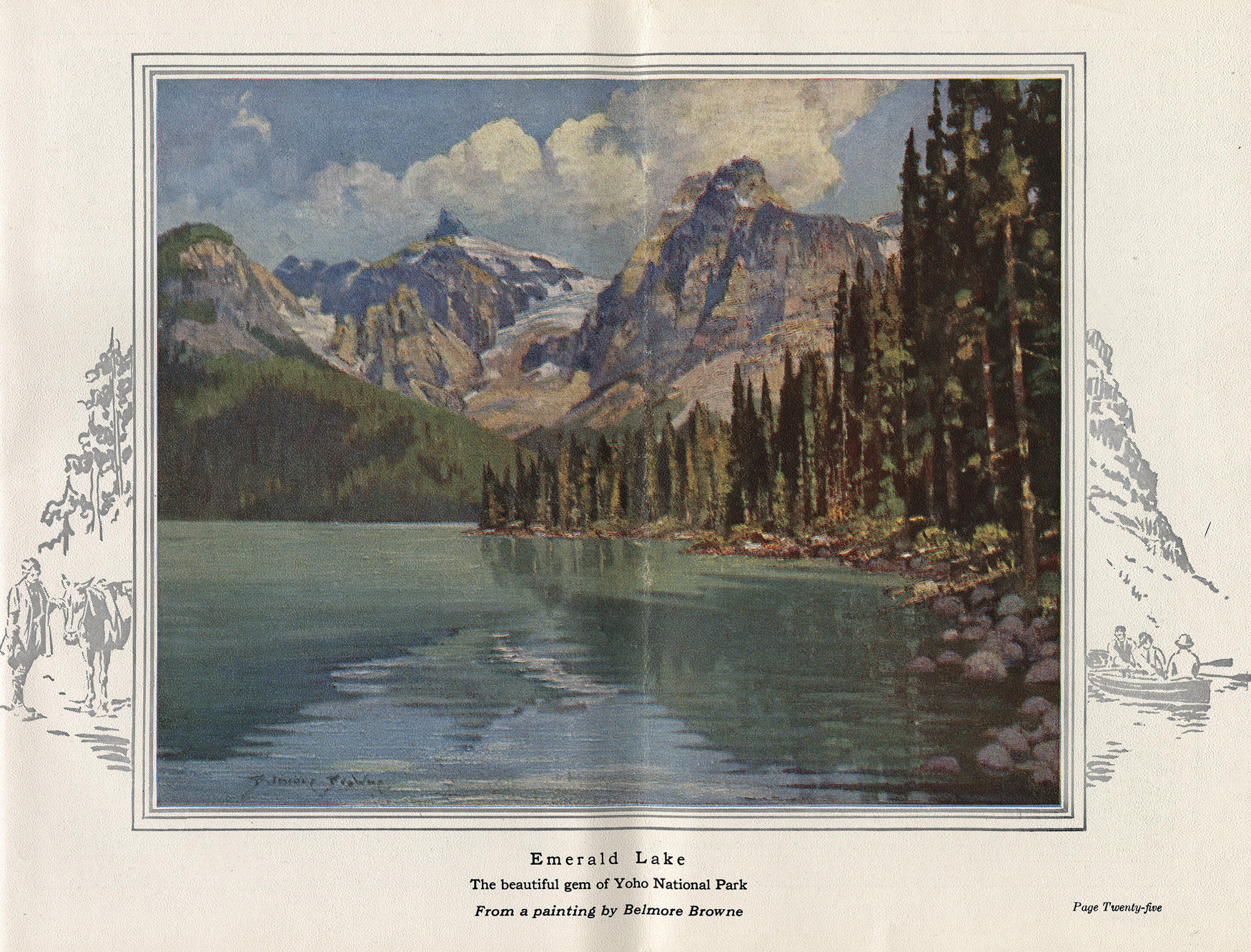 This image shows the view from the deck of the chalet: 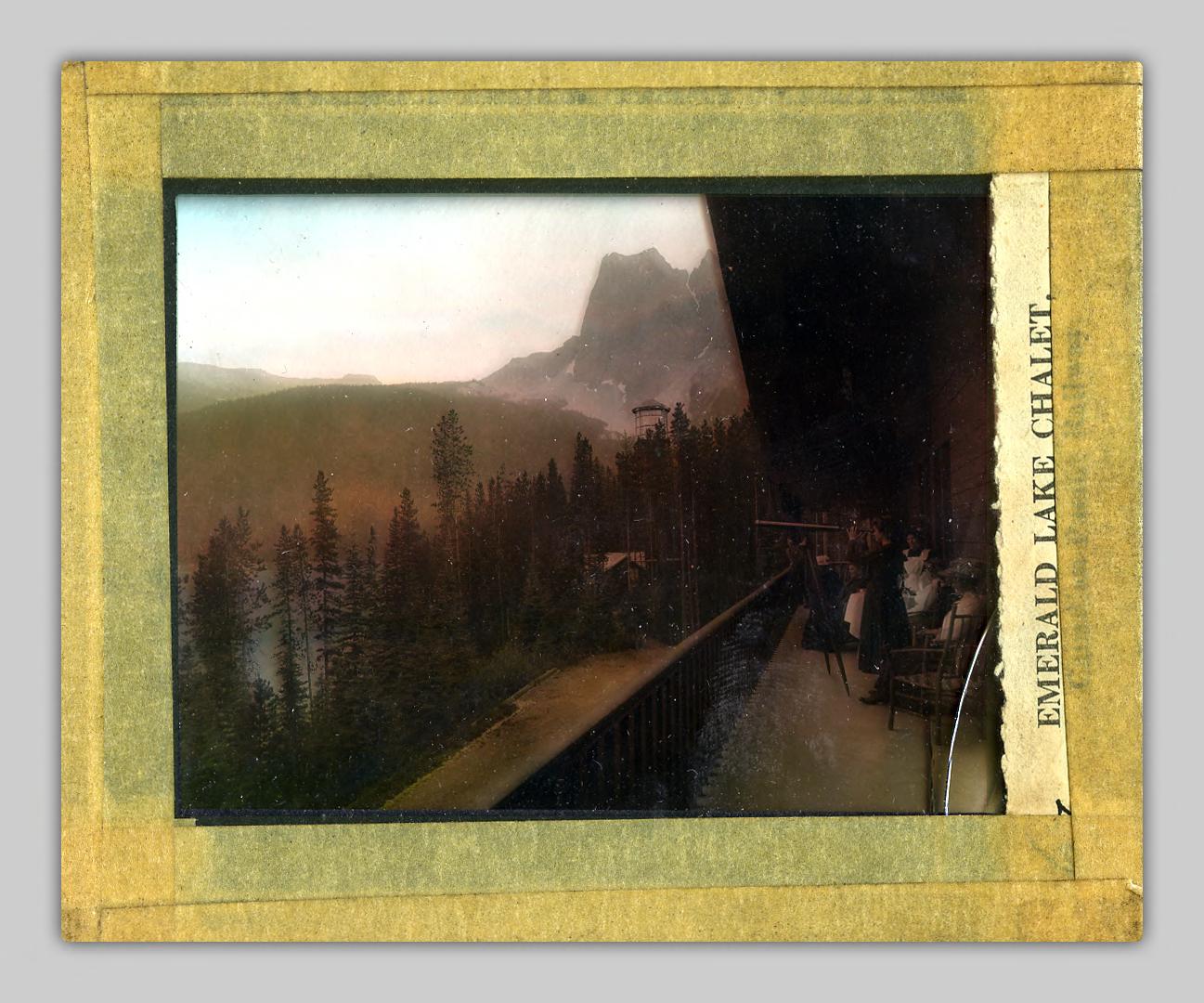 This pamphlet from 1926 summarizes nearby attractions: 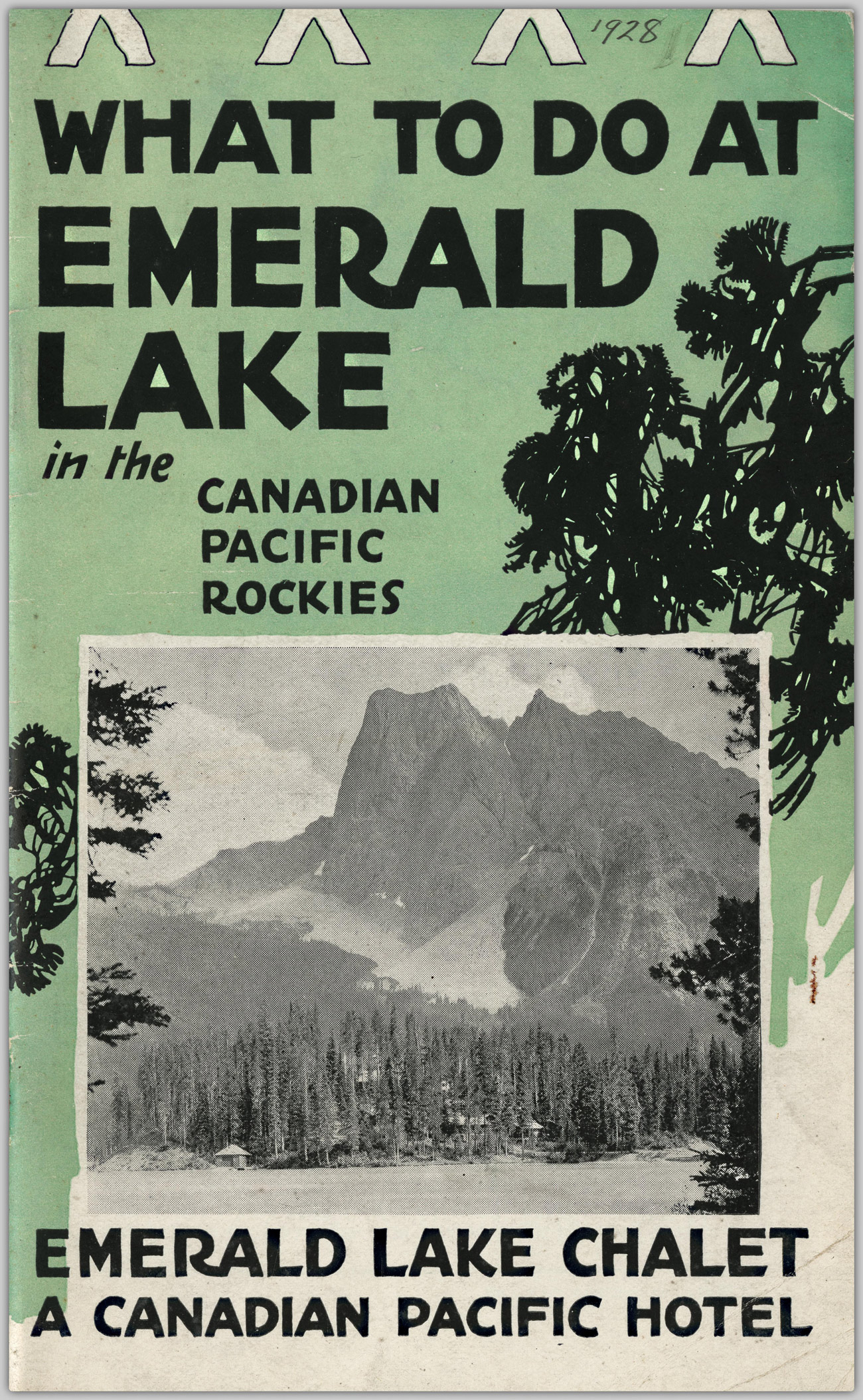 What to do at Emerald Lake in the Canadian Pacific Rockies, 1928.
(Click to view the full pamphlet.)

And this brochure from the 1950s includes interior views of the hotel, as well as views of the surrounding nature: 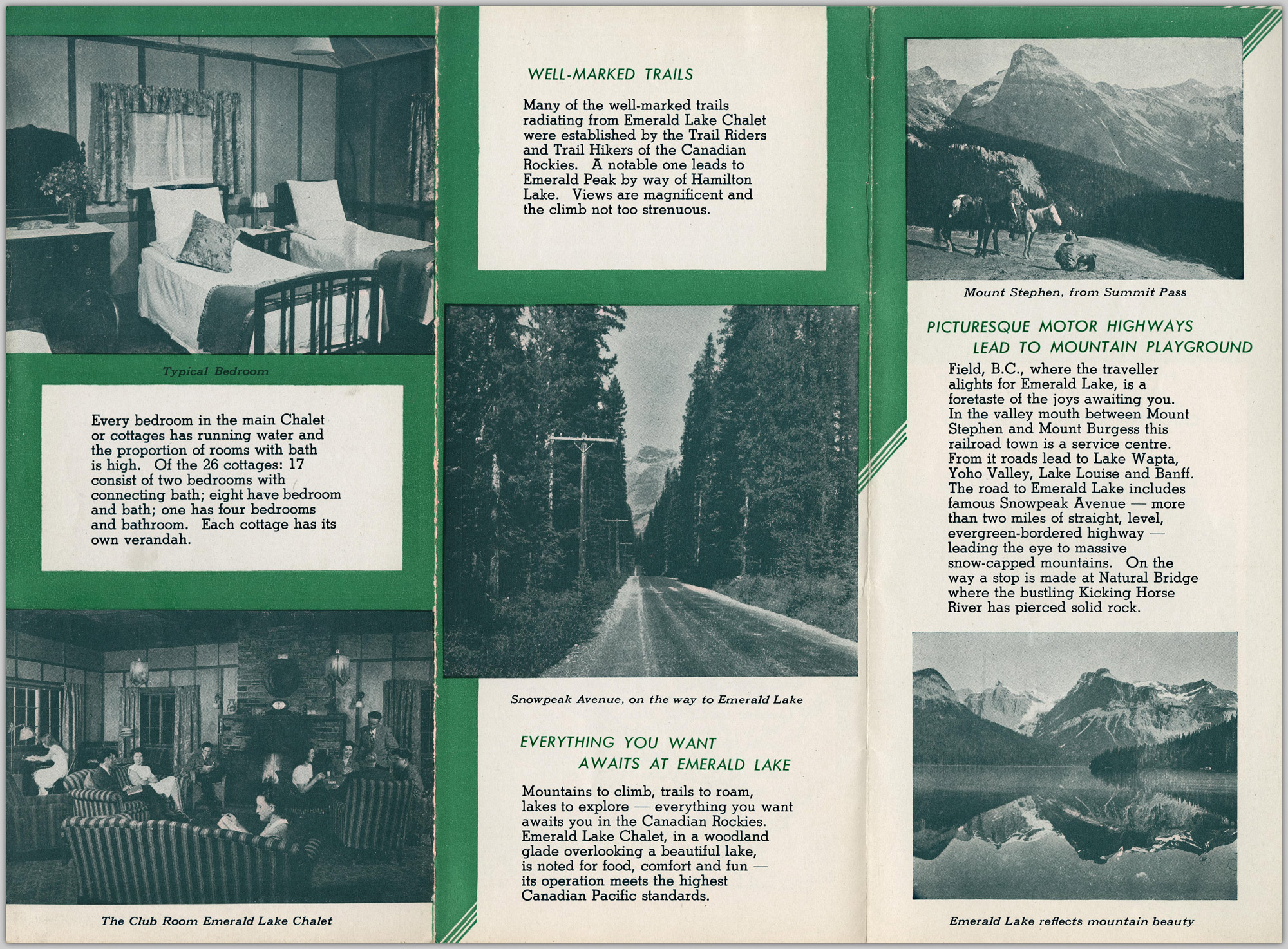 Emerald Lake Chalet in the Canadian Rockies, [not before 1950].

Located in Penticton, B.C., the Hotel Incola (also known as the Incola Hotel) opened in 1912. Shortly after opening, this description appeared in CPR pamphlets:

Hotel Incola – Penticton, B.C.: A new first-class tourist hotel at the foot of navigation on Okanagan Lake reached by the C.P.R. Steamers. An ideal resort for any time of the year, owing to the sunny, dry climate of the Okanagan Valley. Rates, $3.00 per day and upward. American plan. Managed by H. Vince, for the Kettle Valley Railway.

Below are some photographs and an illustration of the Hotel Incola from our collections: 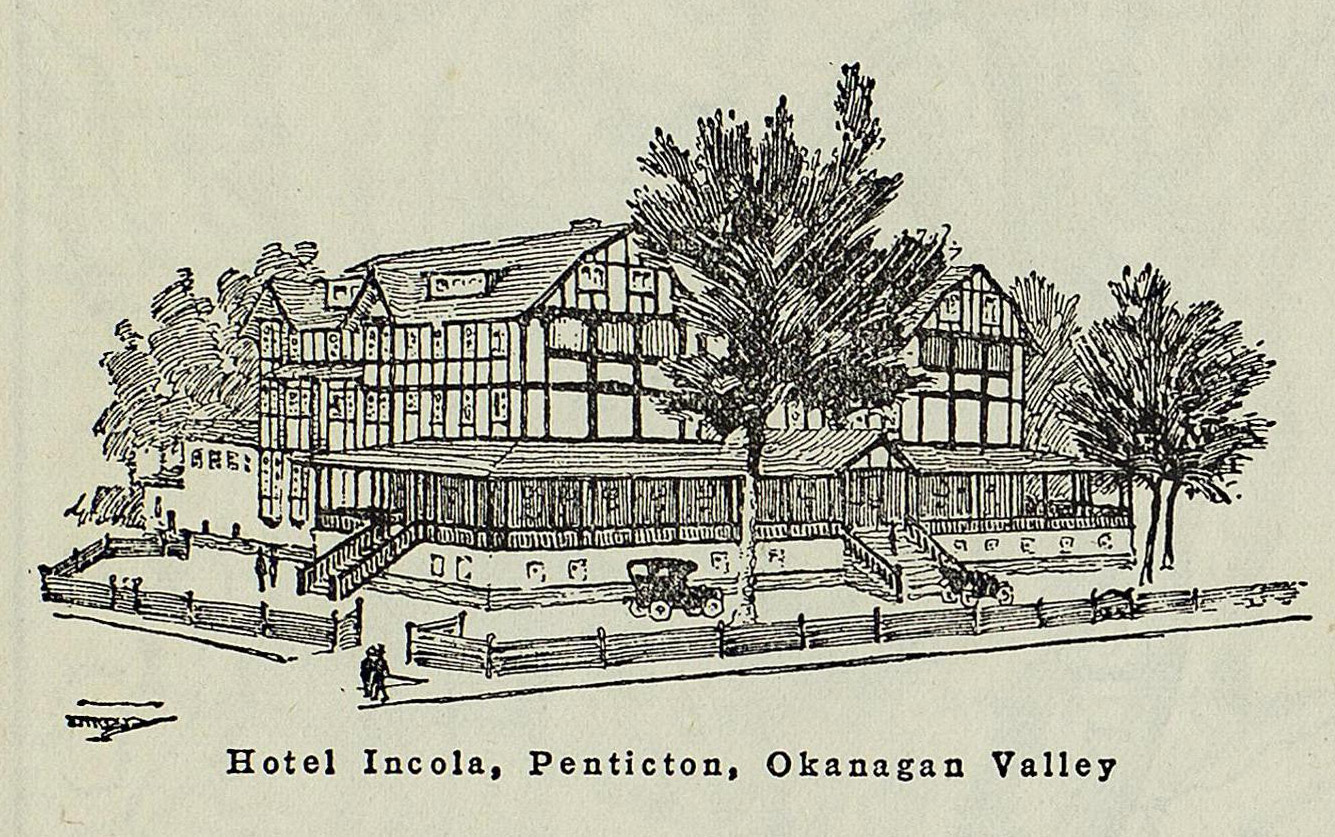 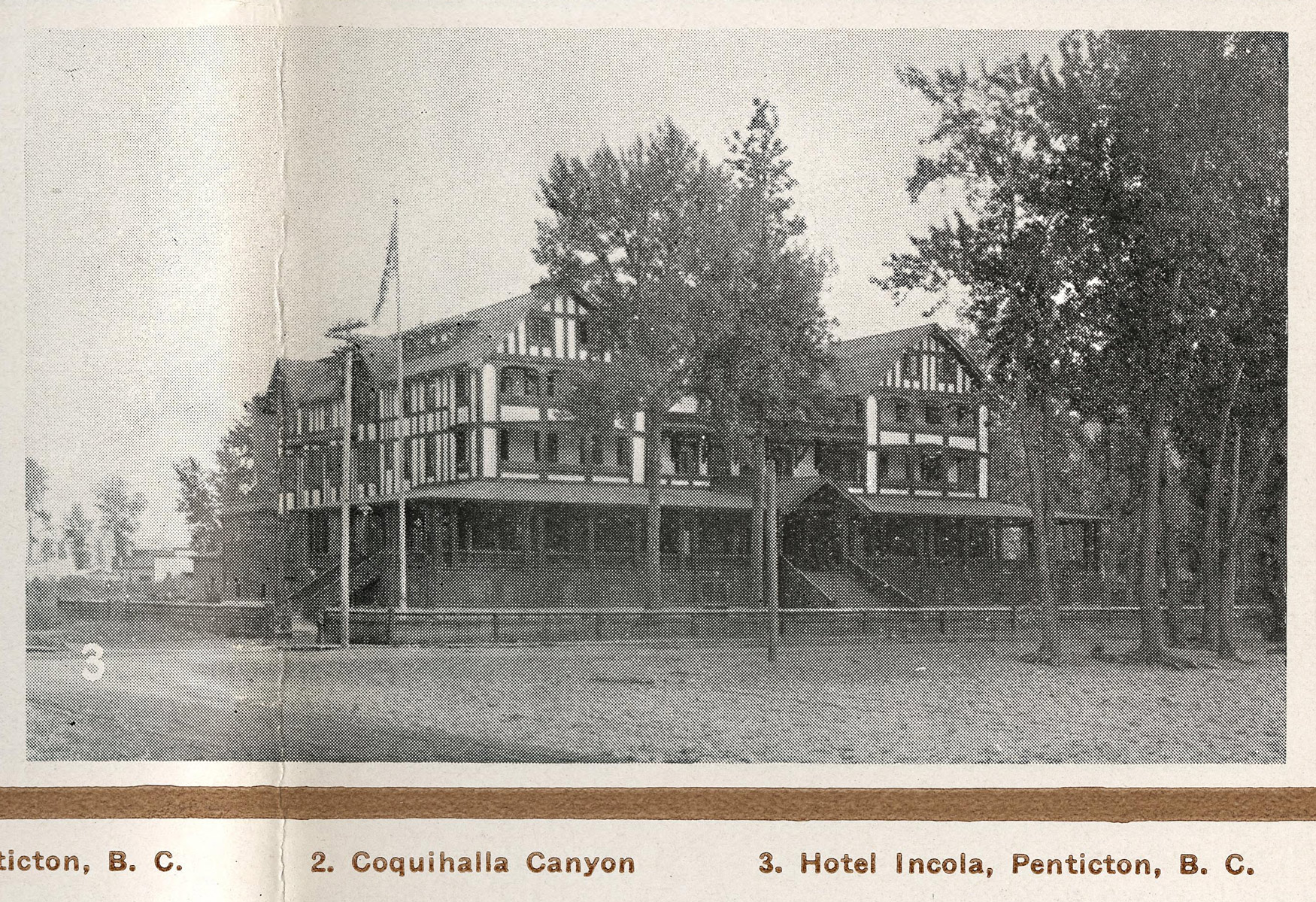 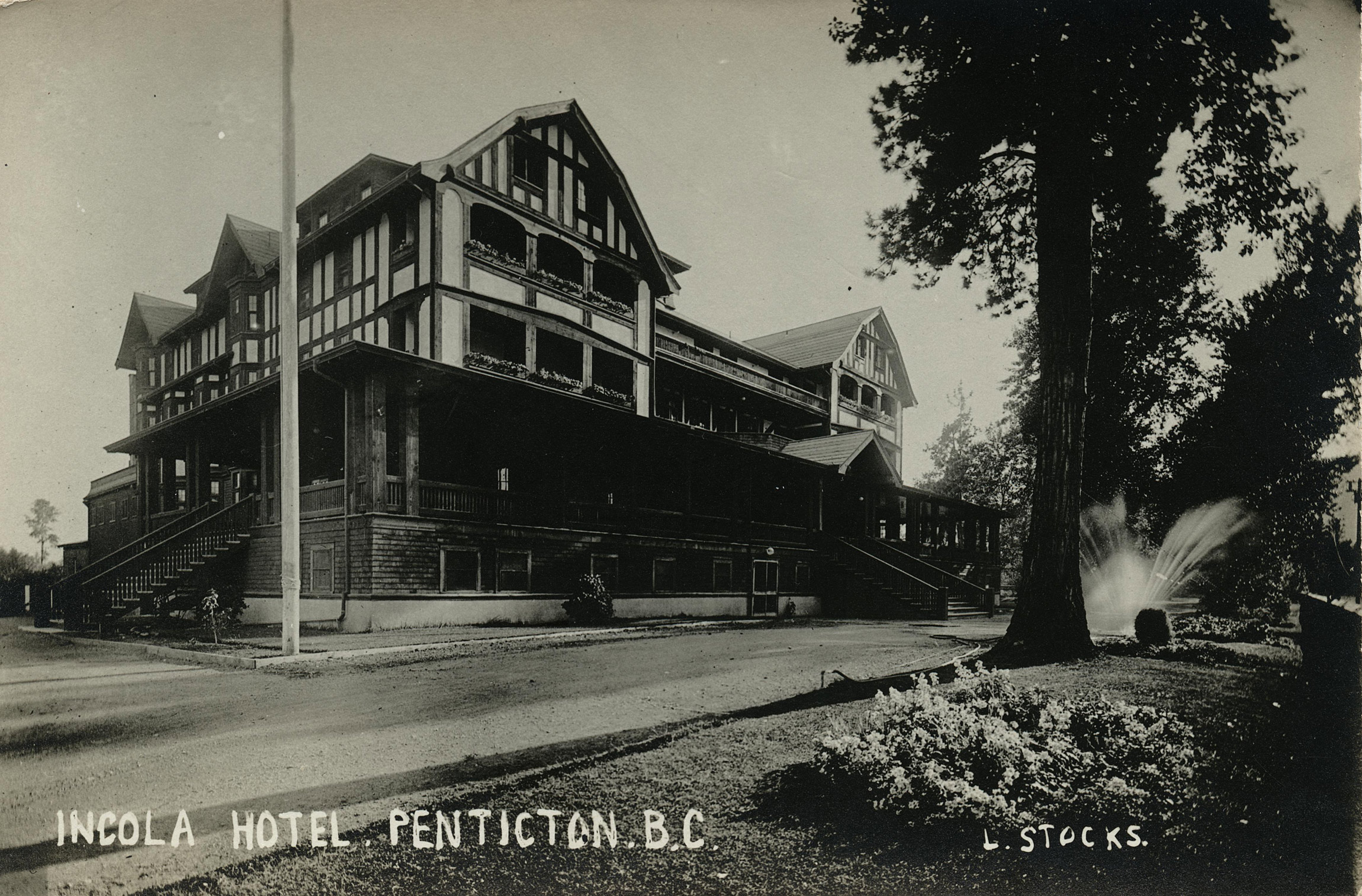 The Incola Hotel closed in 1979, and the building was demolished in 1981. For more details on this hotel, check out Elizabeth Pryce’s 1999 essay, which is available through our Okanagan Historical Society Reports collection.

The Kootenay Lake Hotel in Balfour, B.C. was only open for a short time. After opening in 1911, it closed during World War I, then reopened in 1917 as a “sanatorium for convalescing soldiers.” The building was eventually destroyed in 1929.

A CPR pamphlet from the 1910s provides this description of the hotel and the surrounding area:

This, the most modern of the Canadian Pacific mountain hotels, is situated to the south of the Main Line at the end of the Crow’s Nest branch. It is essentially a hotel where the tourist can profitably spend a real holiday. Situated amongst scenery, not so rugged as that of the Rockies in the north, but which has a softer fascination, all its own, it stands high on the shores of a lake and among mountains, which have been favorably compared with the Italian Alps. The climate, too, is that of the Italian lakes—deliciously warm in the daytime and cool at night.

But it is as a fishing, hunting and boating resort, that the Kootenay Lake Hotel has its greatest claim to favor. The lake abounds in rainbow trout and salmon, for the capture of which every facility in the way of boats, guides and equipment, is offered by the hotel. The wooded sides of the mountain in the near vicinity, contain bear, caribou, white-tail deer, partridges, etc., all of which can be successfully hunted in their proper season. There are good trails for many miles over the mountains, and a wagon road of twenty-one miles has just been completed to the town of Nelson.

Here are some images of the hotel and the Kootenay Landing train station from the Chung Collection: 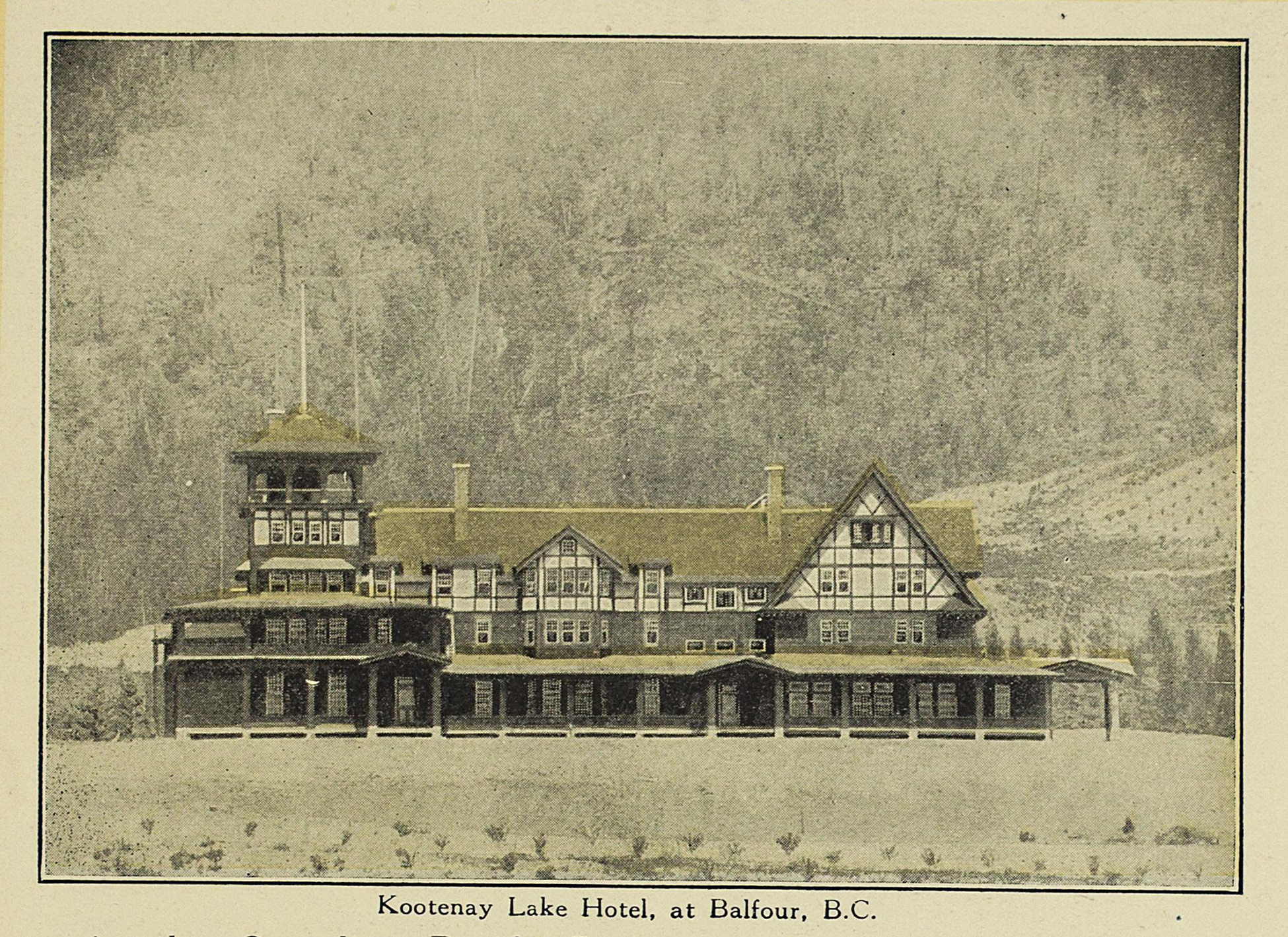 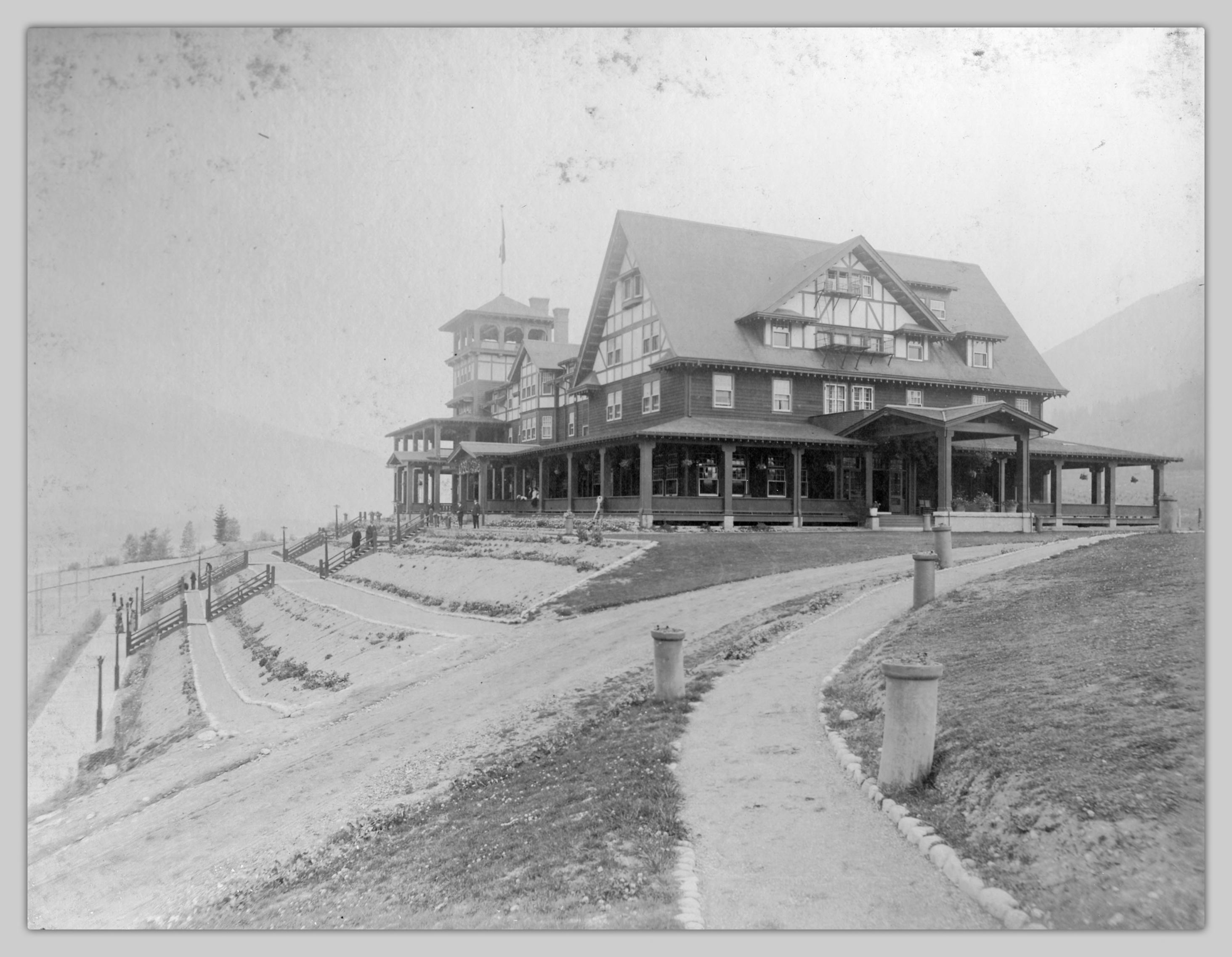 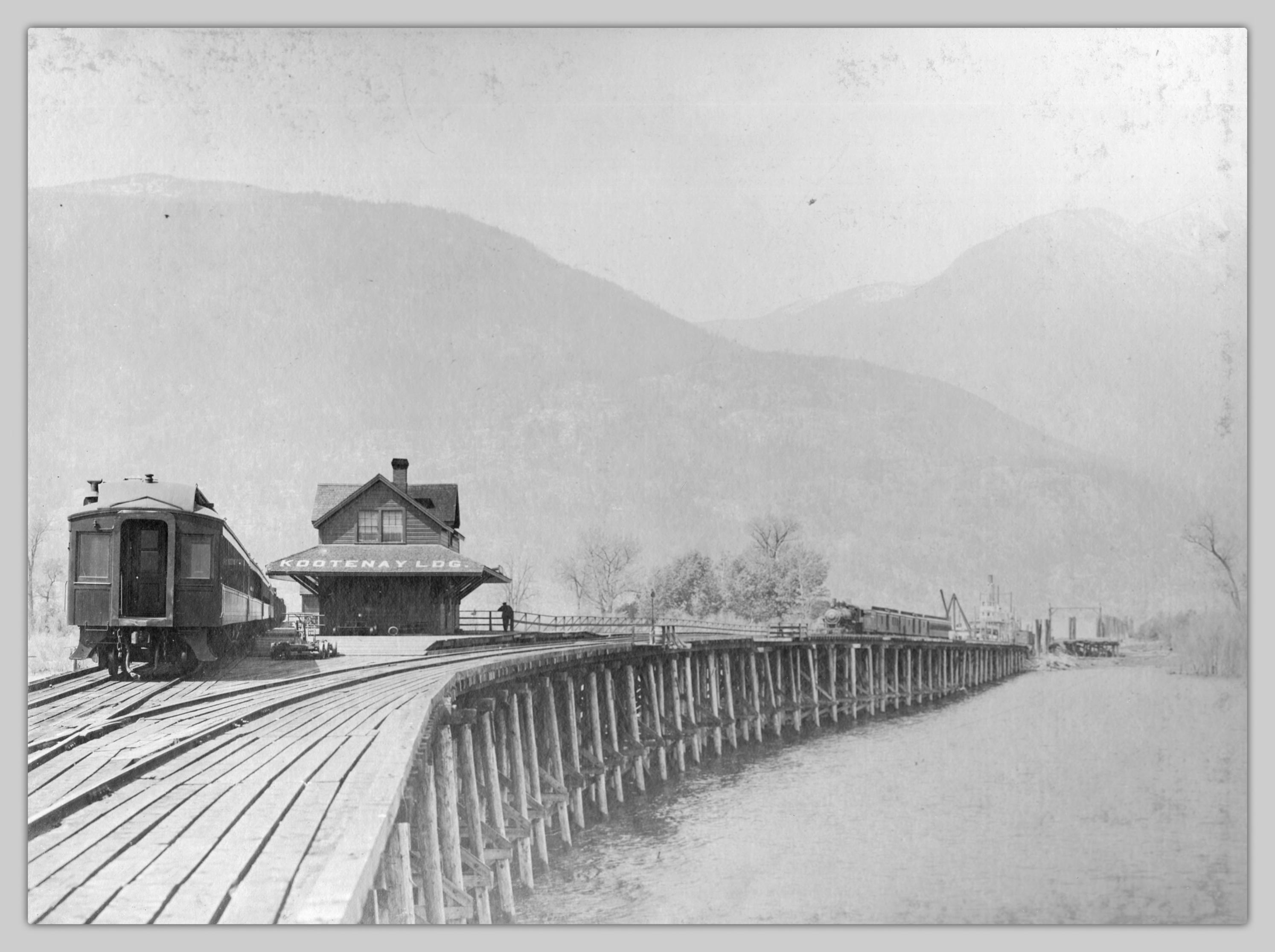 Here’s a description and image of the hotel from a CPR pamphlet:

Cameron Lake Chalet—Snugly located  at  the  southern  end of the Lake. Excellent fishing at the proper season of the year, and a delightful resort for tourists in limited numbers, Cameron Lake Chalet being owned by the Company, and operated privately. A trail to the timber line of Mount Arrowsmith makes a delightful day or two’s outing for mountain climbers. From Cameron Lake the line skirts the foothills of Mount Arrowsmith (6000 feet high), of which a magnificent view can be had as the train passes along the high cliffs on Cameron Lake.

The hotel was open during summers and remained in business until 1966, shortly after the closing of the Port Alberni line passenger service.

One response to “Canadian Pacific Railway hotels in B.C.: Part 2”