The first Hotel Vancouver opened in 1888, located at the corner of Granville and Georgia. This five-story hotel was built and managed by the Canadian Pacific Railway Company.

This short description of the hotel appeared in CPR pamphlets:

The Company have just completed this magnificent hotel, designed to accommodate the large commercial business of the place, as well as the great number of tourists who will always find it profitable and interesting to make here a stop of a day or two, whether travelling east or west. It is situated on high ground near the centre of the city, and from it there is a glorious outlook in every direction. No effort has been spared in making its accommodations and service perfect in every detail, and in the matters of cuisine, furnishings and sanitary arrangements it will compare favorably with the best hotels in Eastern Canada or the United States.

Rates :   three dollars to four dollars and fifty cents per day, with special terms for a longer time.

– The Canadian Pacific : the new highway to the Orient across the mountains, prairies and rivers of Canada, 1889

Below are some illustrations of the first Hotel Vancouver: 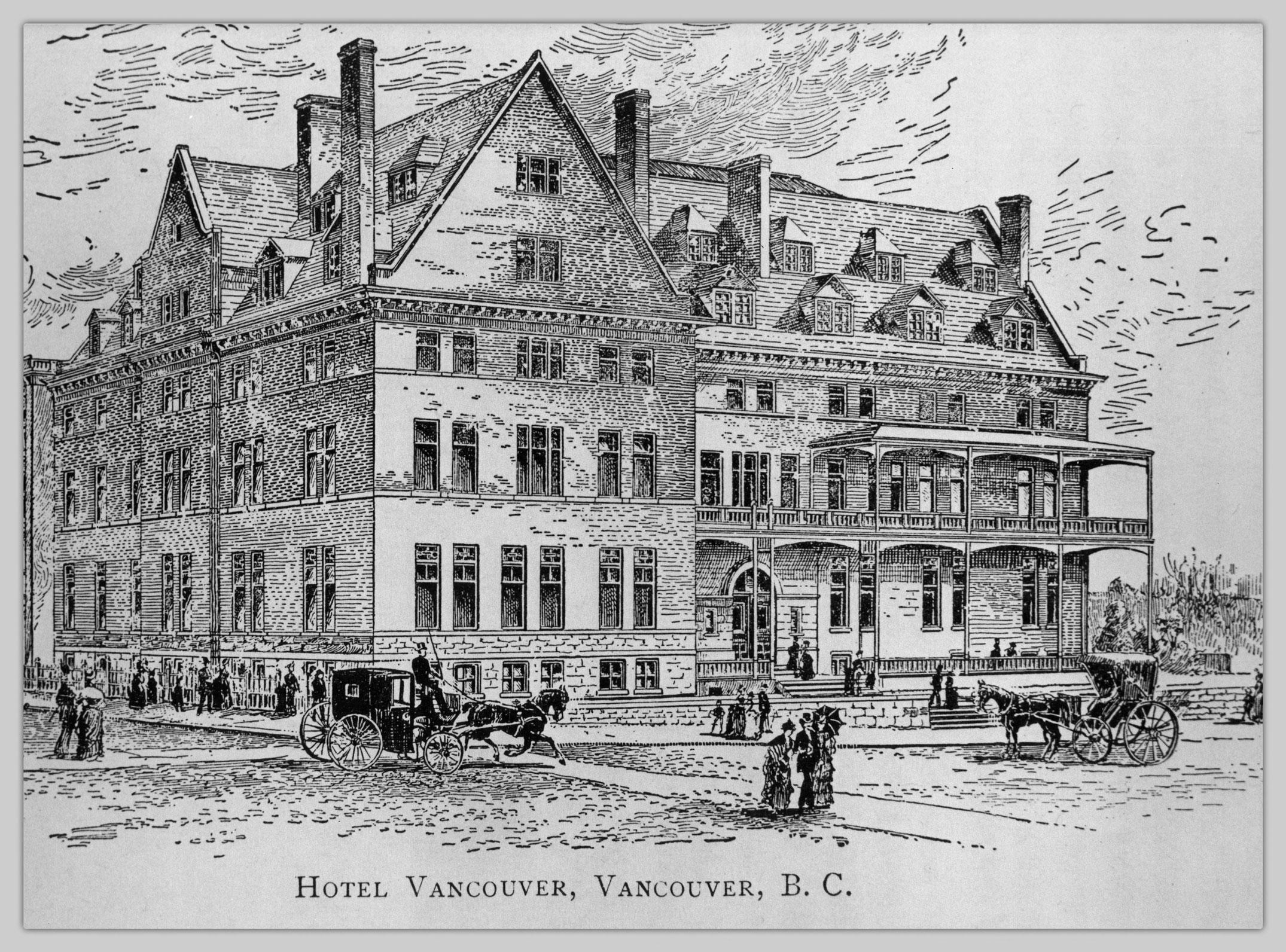 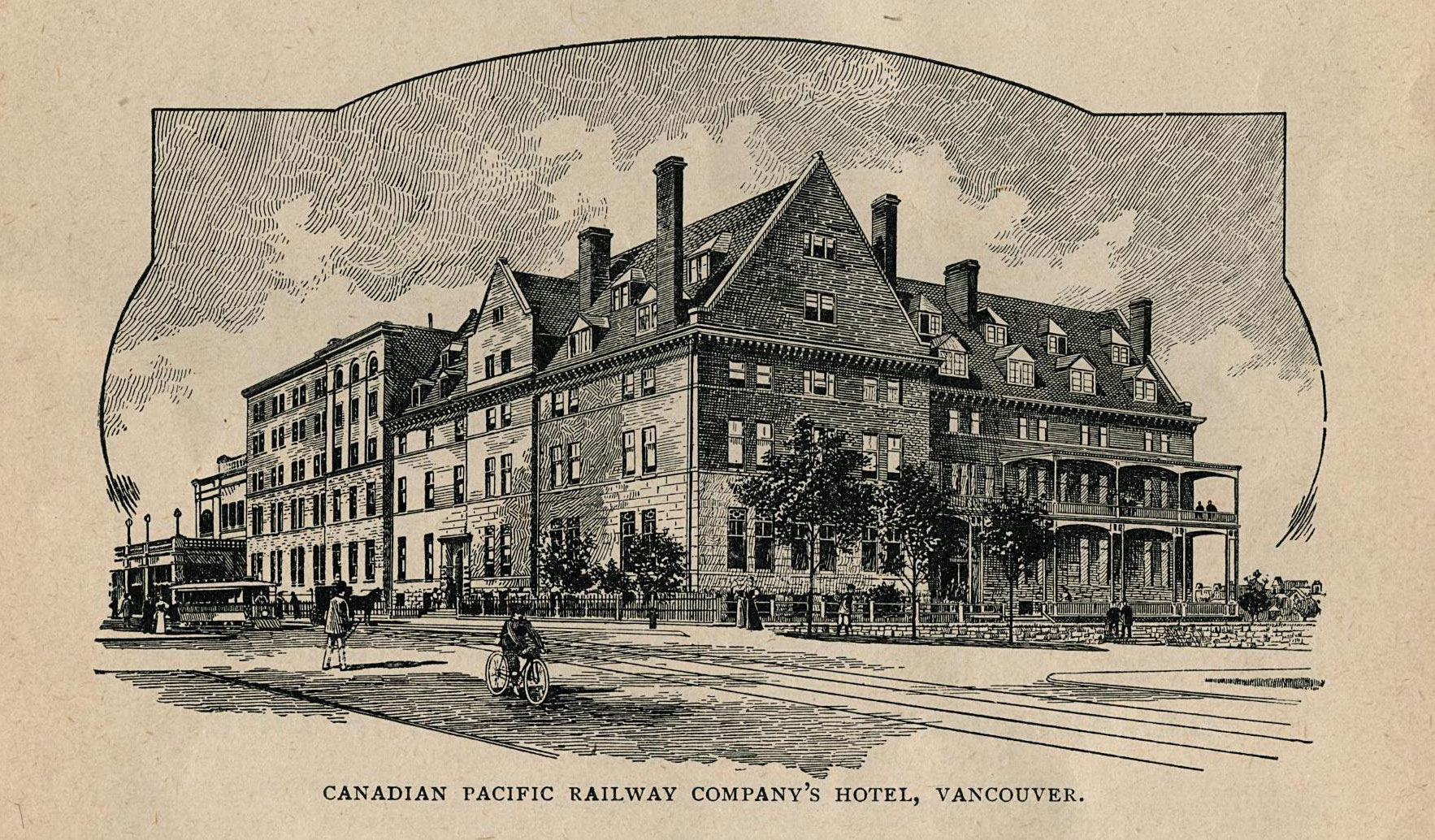 The Canadian Pacific : the new highway to the Orient across the mountains, prairies and rivers of Canada, [1900?], p. 43. 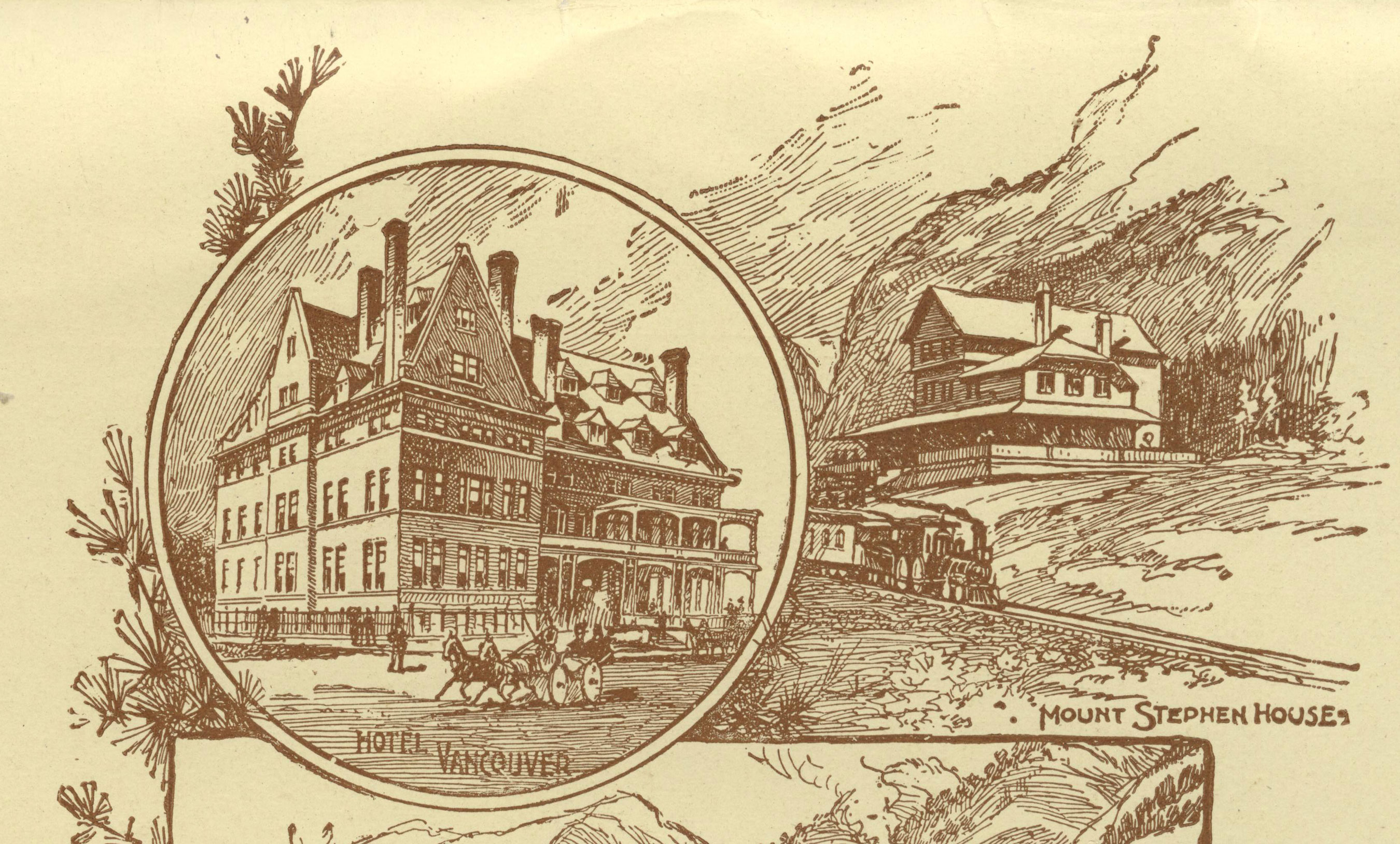 The first Hotel Vancouver existed until 1916, when it was replaced by the second Hotel Vancouver at the same location. The second hotel Vancouver was a more elaborate construction than the first – this 14-story building was designed in the grand Italianite revival style. 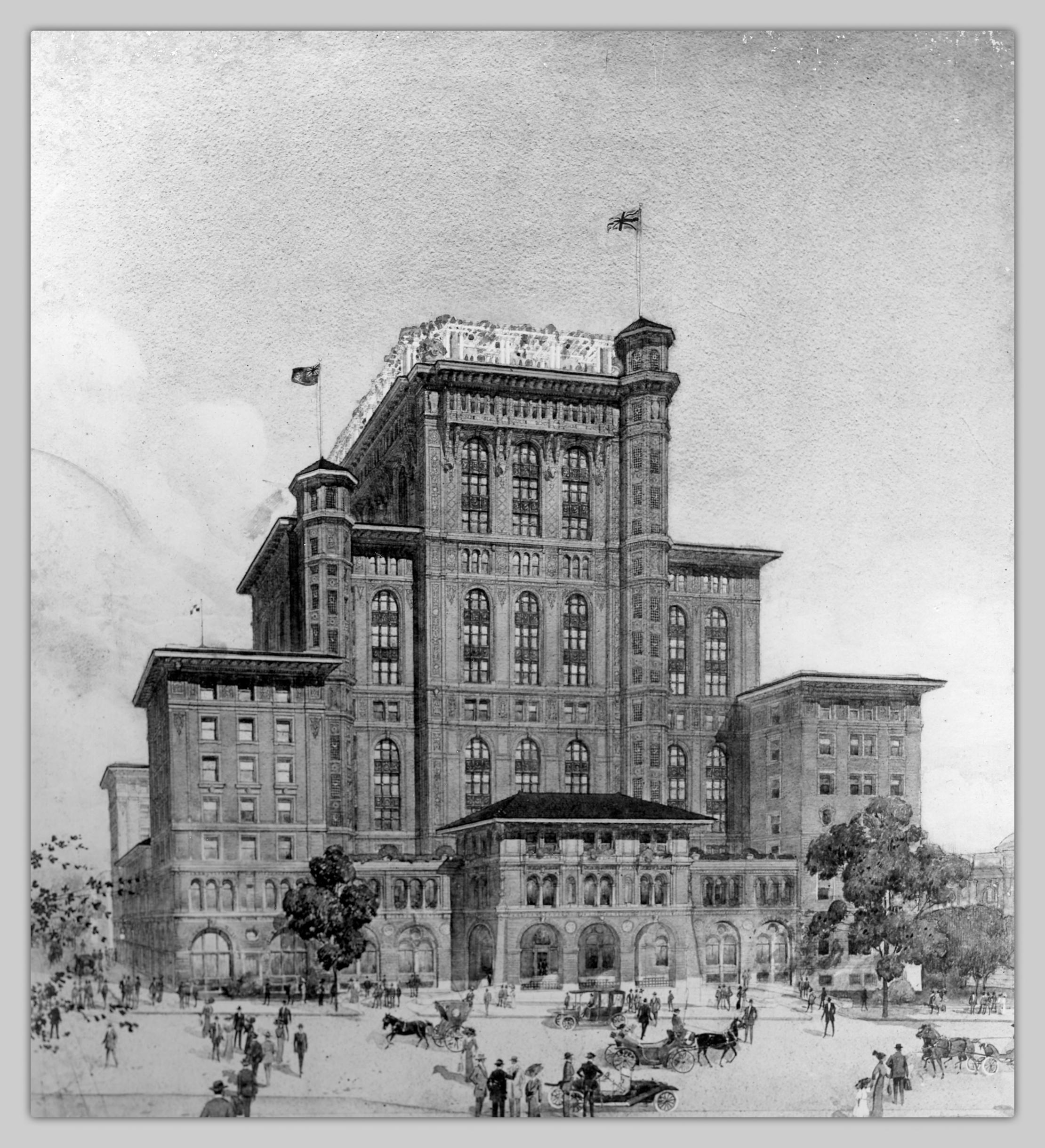 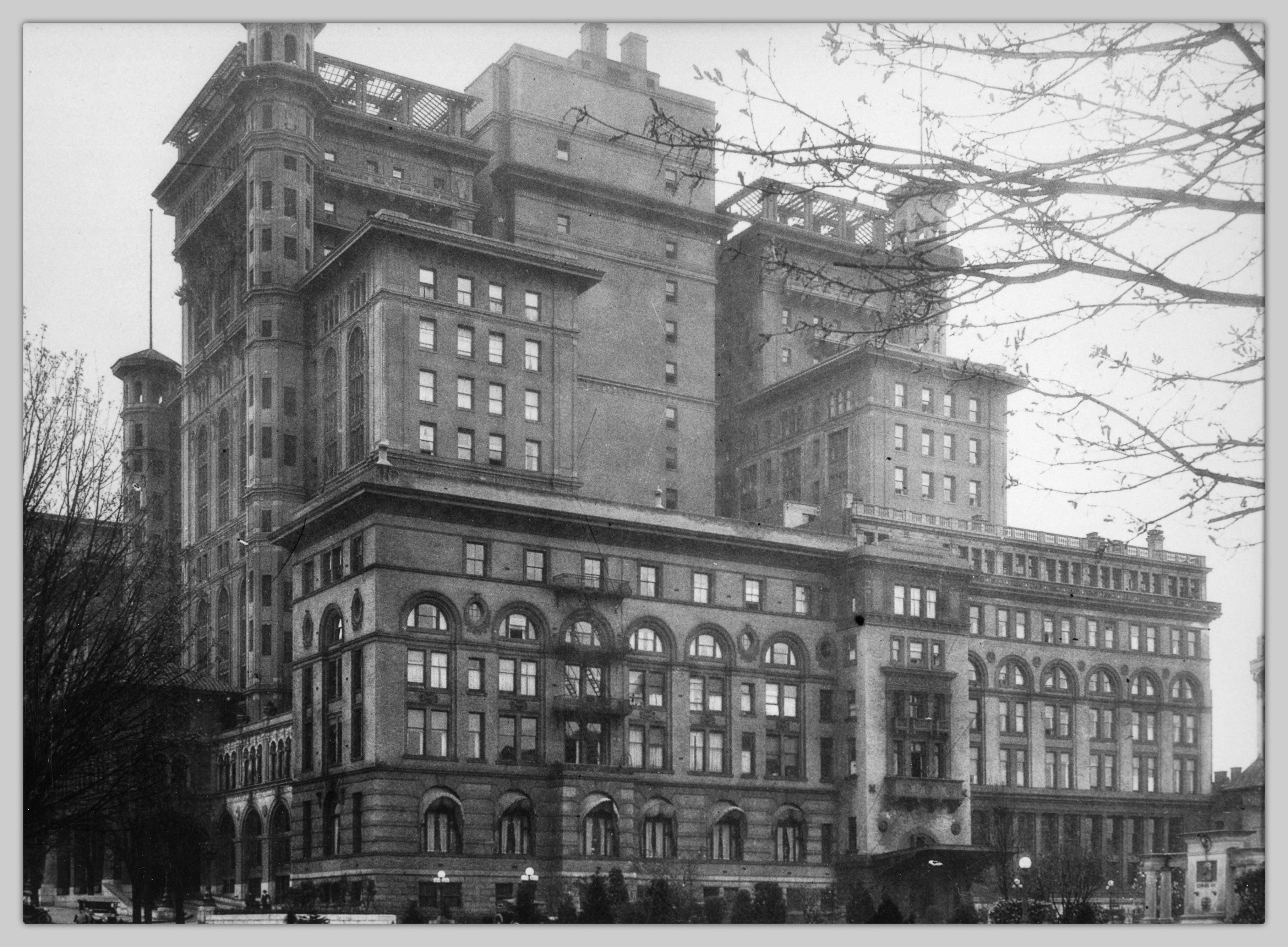 At this time, travelers had many options for CPR hotels to stop at across the country. This 1916 directory of CPR hotels also lists nearby attractions and activities – golf, motoring, fishing, and steamboat excursions were advertised in Vancouver:

Resorts in the Canadian Pacific Rockies, 1916.

In 1931, the CPR published a pamphlet about the hotel, including hotel offerings, interior photographs, floor plans, and nearby points of interest for travelers. Click the cover below to explore the full pamphlet in Open Collections: 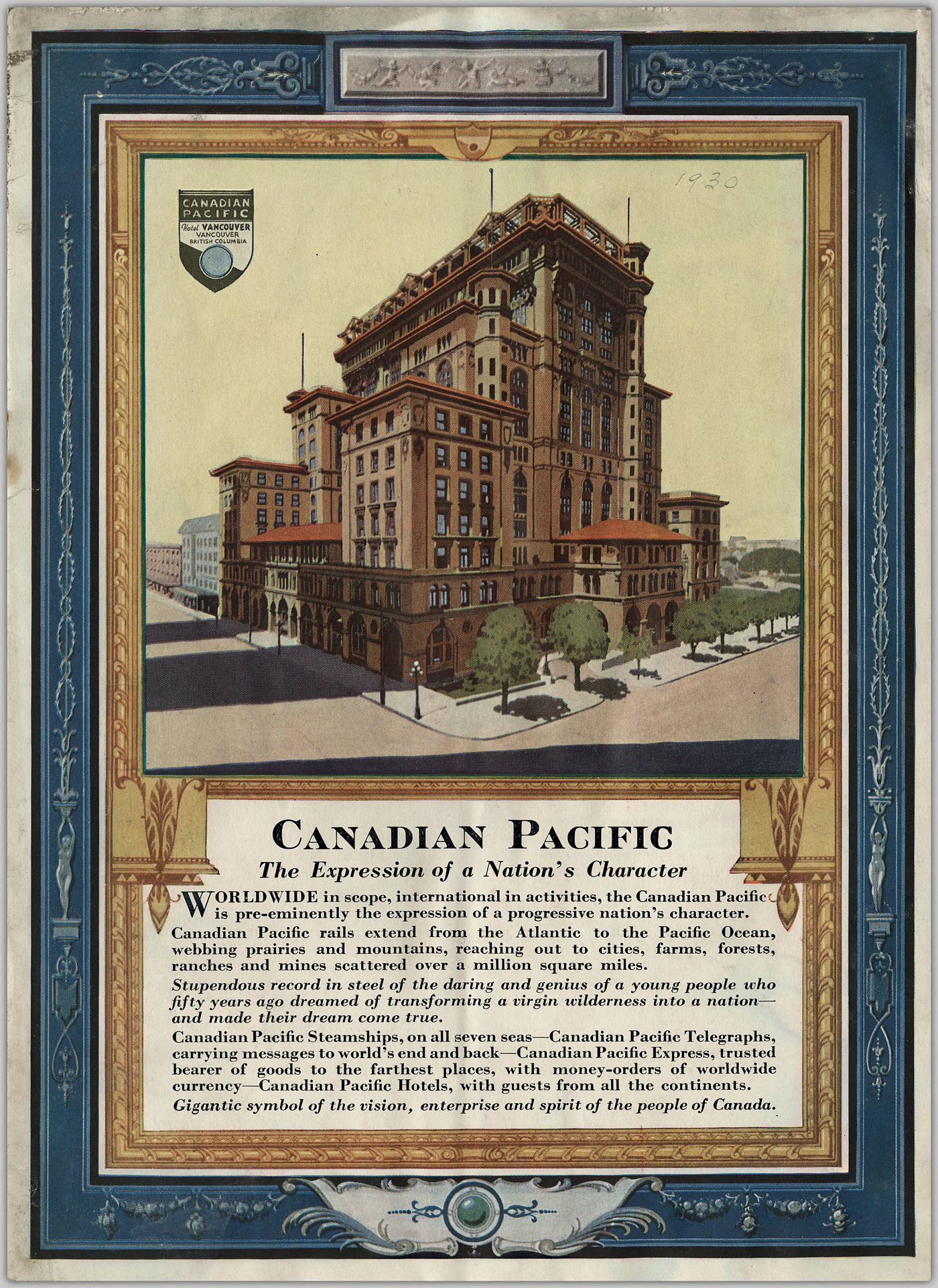 In addition, you can explore menus from the hotel like this one: 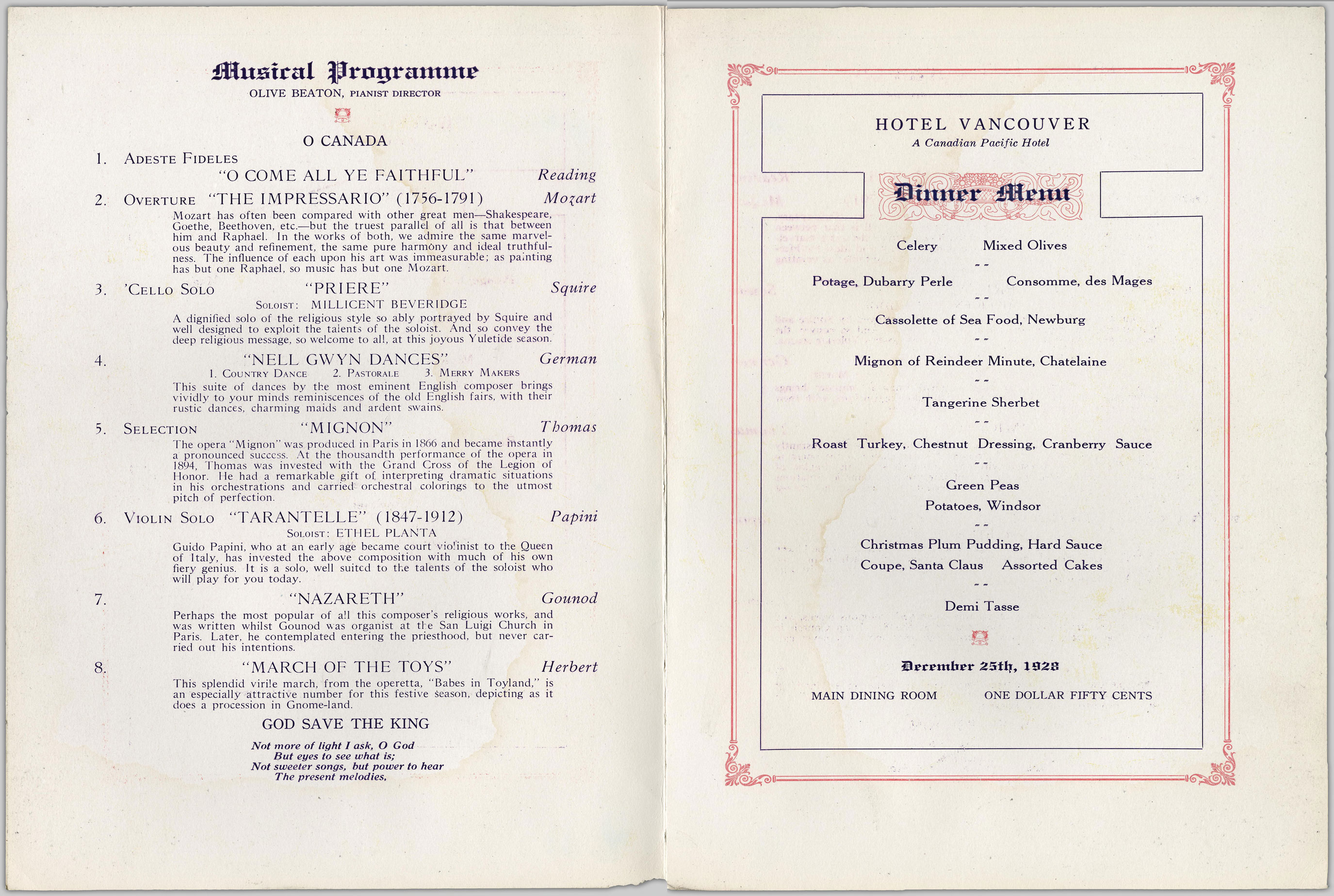 Musical programme and dinner menu from Hotel Vancouver for 25 Dec. 1928

Although the second Hotel Vancouver closed in 1939, the building remained standing until 1949, when it was finally torn down. It was even used as an army barracks during World War II. Today, the Pacific Centre shopping mall stands at the same location. 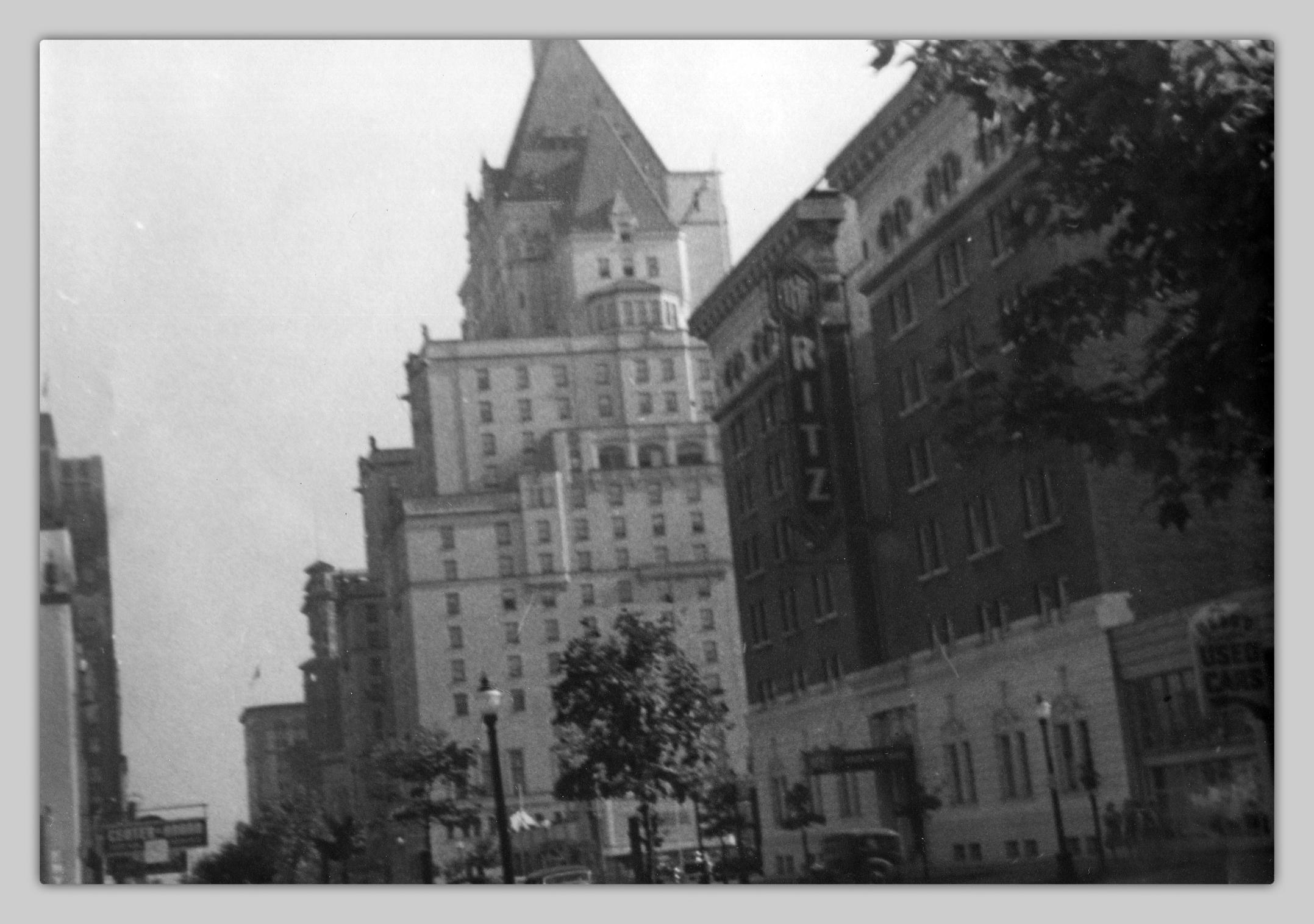 Check out this pamphlet advertising the hotel from around 1940 – click through to view the other pages in Open Collections: 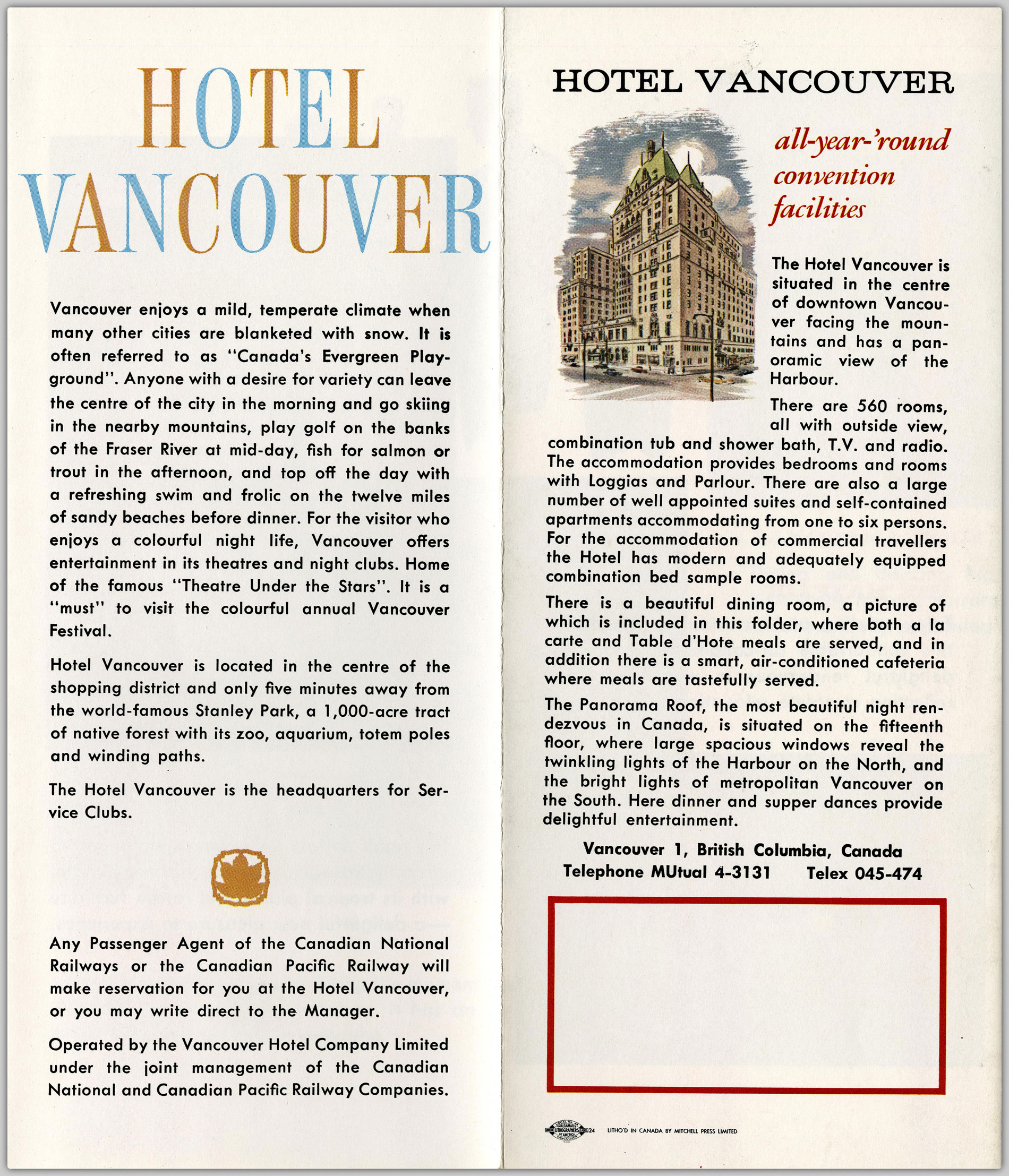 Hotel Vancouver : one of Canada’s finest hotels, [not before 1940]

Here is the Hotel Vancouver’s page in a Canada Pacific Hotel pamphlet from 1958, including a colour photograph: 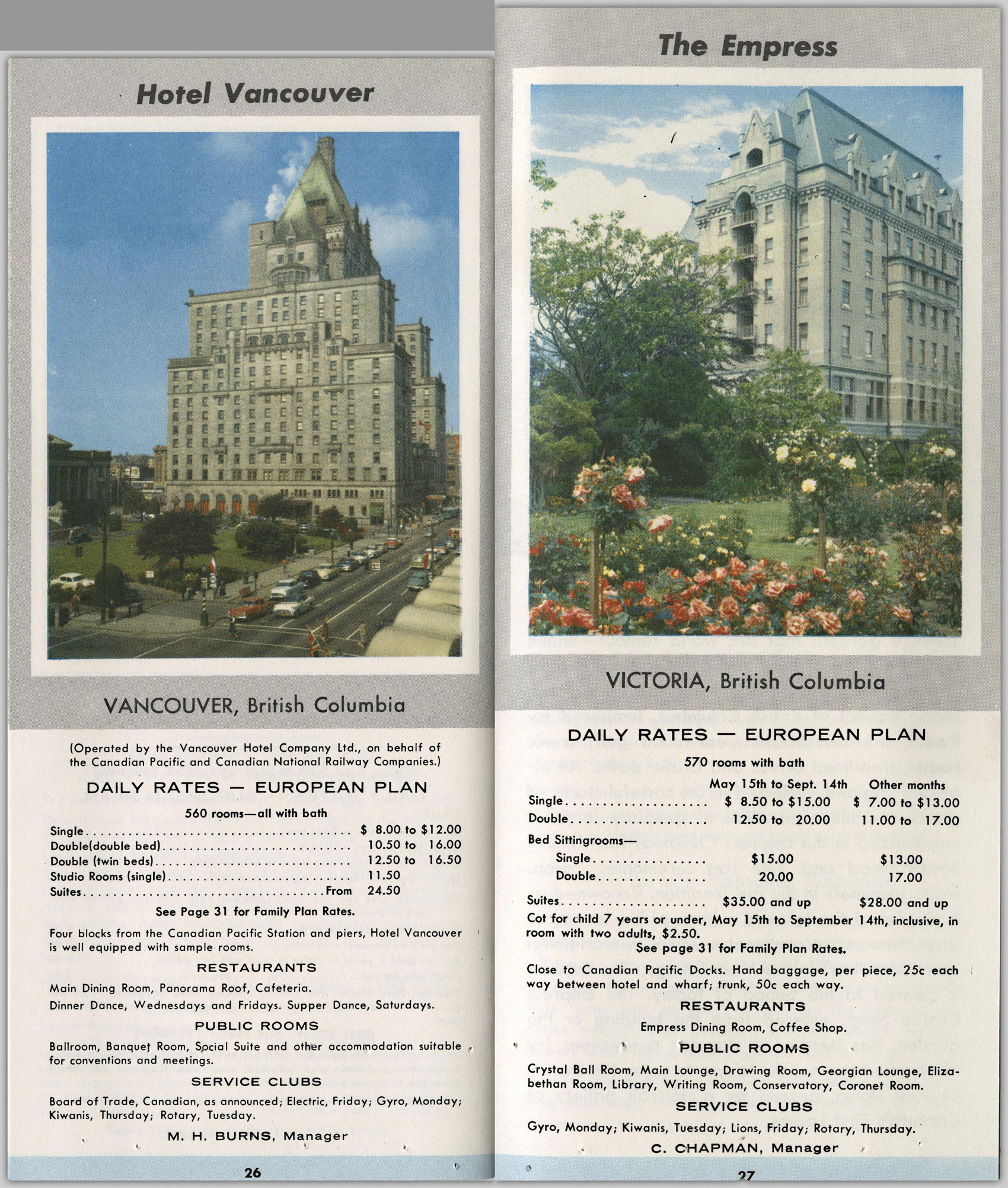 You can find more materials about the Hotel Vancouver, and the other Canadian Pacific Railway hotels, in the Chung Collection.