Historical newspapers are good resources for researching the political, social and cultural trends in local areas during specific historical periods. One of the interesting components are advertisements, which contain information about local businesses, and popular industries around the time. Like today, the papers had designed their advertisements to catch readers’ eyes and attract new customers. From more than 60,000 digitized newspaper issues in Open Collections, this post will introduce our favourite advertisements.

BC Historical Newspapers collection contains 167 historical newspapers with more than 40,000 issues dated from 1859 to 1995. All of the titles were published in British Columbia.

This advertisement by Riley & Donald, an agent company in Kelowna, BC for the McCormick Harvesting Machine Company in Chicago, IL, depicts a letter from a horse that complains about how heavy the mower is to pull and suggests that farmers buy McCormick’s lighter product. 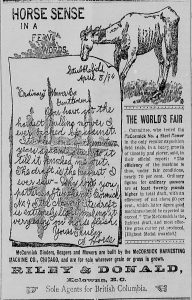 The Cumberland Islander (1910-1931) was a weekly newspaper published in Cumberland, BC. We have digitized all 1,094 issues.

British Columbia Telephone Company (BC Tel) advertised its telephone service, which was relatively new at the time, 40 years following Alexander Graham Bell’s invention of the telephone near Brantford, ON in 1876.

Today we have the Internet that makes us feel like “neighbors”, 100 years after the publication of this advertisement! 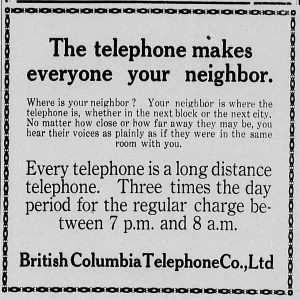 Chilliwack Free Press was published from September 1911 to October 1912 in Chilliwack, BC.

Mooney Biscuit & Candy Company, based in Stratford, ON, advertises its biscuits. Using the Grand Trunk Railway of Canada running beside its factory, it exported its biscuits and chocolates to other areas of Canada. The advertisement emphasizes its freshness as a ready-made biscuit and appeal to those who do not have spare time for baking biscuits in their kitchen. 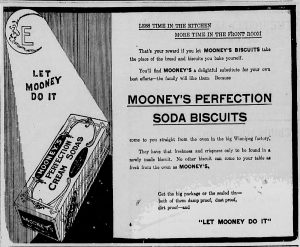 The Alice Arm and Anyox Herald was published weekly in Alice Arm, BC between June 1921 and March 1935. We have 707 digitized issues.

The Canadian National Railways and Canadian National Steamship Company advertises both trains and steamship services by effectively using the vertically long rectangle area. Since the bird was flying at the top and ship is sailing at the bottom, the ad area itself looks like a scene in the ocean.

Tairiku Nippo (The Continental News) was published from 1907 until the day before Pearl Harbor in 1941 for Japanese Canadian communities in BC.

The following is the ad of Hudson’s Bay Company written in Japanese and announces its sales items for the upcoming Saturday. 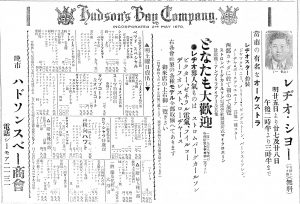 The Ubyssey is UBC’s student newspaper that started in October 1918. Until today, it has published the largest student paper in Western Canada, once a week during the school year. Open Collections have digitized more than 5,000 issues with a significant contribution from the Graduating Class 2002/03 as well as additional funding received from the President’s Office, The Ubyssey Publications Society and the UBC Library.

Bridgman’s Studio Limited (1915-1948) was a photo shooting studio located in Granville street owned by Archibald Thomas Reed Bridgman. This advertisement from January has a warm message to its audience and advertises its photo shooting services to UBC students. 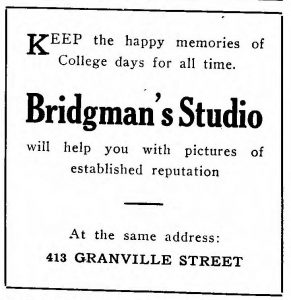 If you want to explore more newspaper advertisements, please visit our Open Collections and search our newspaper collections.