How We Digitize: Manuscript Makeover

One of our oldest books, the Logroño Antiphonary, is getting a digital restyling! 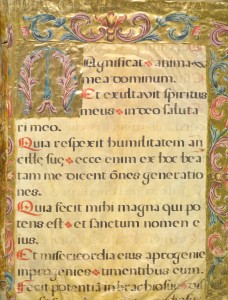 Part of the Western Manuscripts collection from Rare Books and Special Collections, the Logroño Antiphonary*, known more commonly as the Spanish Chant Manuscripts, is a gorgeous collection of Gregorian chants, hymns and psalms complied by the Catholic church in Logroño, Spain. The text is what is known as an illuminated manuscript, meaning it has many examples of beautiful drawings often decorated with burnished gold foil.

Originally dating from sometime between 1575 and 1625 the Spanish Chant Manuscripts are magnificent in their aged elegance. The first digital copies are much younger than that. They were created only six years ago with a single DSLR camera! But like any beauty of great repute time wears on and staying ship shape requires a few touch-ups.

So at DI we are re-imaging each page in the book at a higher resolution with more sophisticated technology.

We place the book on a large flatbed. Using what’s known as a TTI scanner we photograph each page very carefully. The TTI has two banks of lights, which illuminate the image on a flatbed below. The camera is above the flatbed. 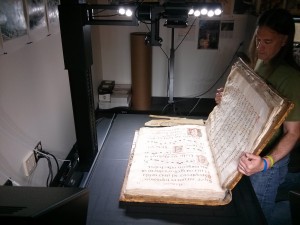 Lights! Camera! Action! – Roy Stibravy holds up the cover of this fragile text to keep it intact

The camera is set up to take four pictures at once. Through the magic of the image-processing program Capture Flow, the four images are stitched together for a more complete image. After editing in Adobe Photoshop the images are uploaded to the web so you can access them! 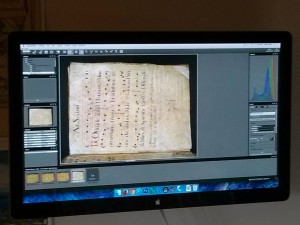 This screen is set up to show exactly what the images look like when they are being taken and stitched togeter.

Right now we are still in the picture taking and image-editing phase. We’ll keep you updated when these new beauties will be uploaded to the Internet! But if you can’t wait check out the older images here. Then take a look at Western Manuscripts collection!

*In case you are wondering, as I was, what an antiphonary means- it is a book that contains religious choral music sung in a ‘call and response’ between two choirs. Which is, go figure, exactly what the Spanish Chant Manuscripts are!