How We Digitize: Audio Edition!

Every blog reader loves an inside scoop. Here is a heads-up on one of our upcoming projects!

The UBC Library Digitization Centre and CiTR 101.9 FM, the Student Radio Society of the University of British Columbia, are at it again! We’ve got another collaborative project in the works, with support from the BC History Digitization Program and the UBC Centennial Initiatives Fund. This time we are digitizing CiTR’s collection of 800+ reel-to-reels and making them available for future online downloading by YOU.

This collection of rare Vancouver-centric recordings spans in-house radio broadcasts on CiTR from 1949 to the late 1990’s. Recordings include live music performances, radio documentaries, public service announcements, event broadcasts, as well as news, arts, and culture reports. When this project is fully implemented hours of amazing music and voice recordings will be online just waiting to be discovered!

So how is it done? Where do you start?

All of the broadcast recordings are stored on reel-to-reel tapes. Most of them look like this: 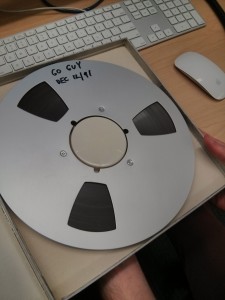 CiTR hired an audio engineer to transfer the information from the reel-to-reel’s magnetic tape, on which reel-to-reels are recorded, to a digital media format. In real time the audio engineer used a reel-to-reel playback machine to record through a computer. The tapes were recorded in a high quality sound format called digital broadcast wav format, which can be read by the computer.

Then what? Can we listen to them now?

Nope! Not yet. The broadcast format wav (or Waveform Audio File Format) files are often way too big to download. The recorded wav files can be a gigabyte or more! Its got to be transformed into something smaller- an MP3, which is often less than 100 megabytes.

How long does that take?

A surprisingly long time! Here at the digitization center we have someone look through and listen to the audio.

Then they revise the audio contents for sound quality in a free open-source audio editing program called Audacity. Using Audacity they adjust weird noise levels, and edit out copyrighted audio. 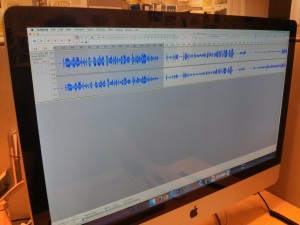 The next step is to take the available file information and check it. This is done by comparing the information they have about the recording – the metadata – against  Discorder, a printed magazine, which reported the who, what and when of most of the broadcast on CiTR. They also check the information against the original reel-to-reel tape. 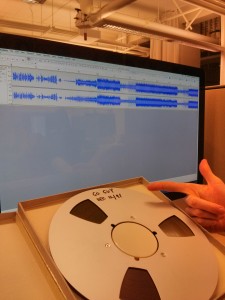 Finally they create MP3 access files that are a more manageable downloading size.

With over 700 reel-to-reel tape recordings this is a big job! So stay tuned, we’ll let you know when you can get your hands on recordings of everything from that local hipster band just waiting to be rediscovered (by you!) to vintage Sleater Kinney! 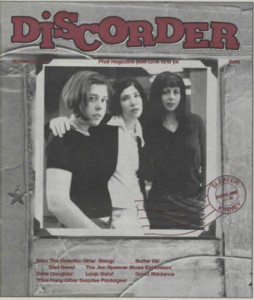 Lookin’ forward to listening to these ladies!

Want to learn more about the music related stuff we’ve got? Check out Discorder, a magazine devoted to in-depth coverage of Vancouver’s independent music scene and published by CiTR 101.9 FM. Then look at our blog about our digitization of Discorder.