Cartographers and mapmakers have been inspired since time began by the tall tales the slink out of the sea via mariners and shipwreck survivors. From giant man-eating whales, to mischievous mermaids, to indescribable monsters of another age, these beasts have crept into maps where they are least expected. Many were included to decorate maps and illustrate unexplored regions.

The maps of UBC’s Digital Collections are no exception. One of the longstanding digital collections, the Andrew McCormick Maps & Prints Collection, has quite a few beasties in fact. Check out a few of the fiends hidden among the waves below. Click on any of the pictures to be taken to the digitized map!

Then go exploring the digital archive for yourself. See if you can spot a sea monster! (just hopefully not in English Bay) 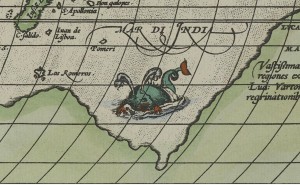 This map from 1587 has what might be the scariest serpent/whale ever seen swimming in the Indian Ocean. 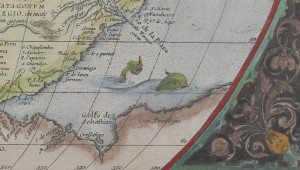 This guy from a map in 1573 is also hanging out in the Indian Ocean. Guess that’s why when you zoom out… 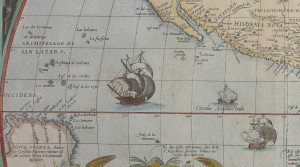 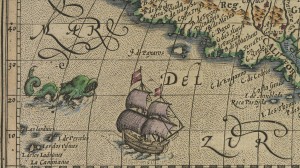 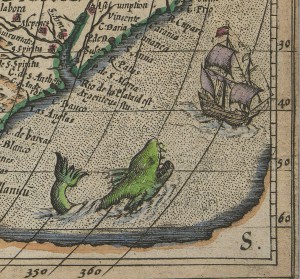 … and they’d got fierce teeth! 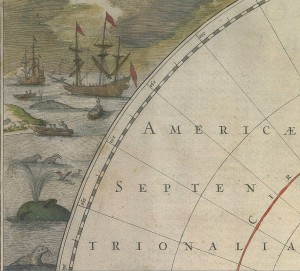 With what might be the friendliest sea monsters ever, a few whales and his seal pals seem to be chilling on the edge of the map awfully close to a lot of boats. 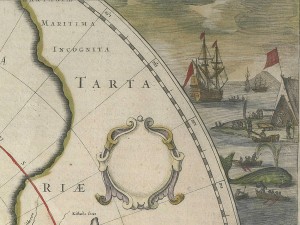 Oh no! Whale watch out! – Want to know what happened to the whale? Click on this image! (This map was only made 1638- so I don’t want to spoil it)

One response to “Sea Monsters, Maps & You”