According to the 2016 Census, 1.6% of the Vancouver metropolitan population identify as having Japanese ethnic origin.[i] The first wave of immigrants from Japan arrived in Canada in late 19th century, and the majority of them resided in British Columbia. As their primary information resource, a Japanese-Canadian newspaper, Tairiku Nippō (大陸日報, Continental Daily News) was published in Vancouver from 1907 until 1941. With generous support from Mr. Naomichi Nishimura, a Director of the Hikone Public Library in Japan, UBC Library created the microform edition in 1987[ii].

With the kind permission from the family of Yasushi Yamazaki (山崎寧), a publisher of the paper, and the metadata provided by Professor Norifumi Kawahara’s research team at Ritsumeikan University in Kyoto, Japan, we have published more than 10,000 issues in Open Collections.

Tairiku Nippo was founded on June 22, 1907, in Vancouver by Dosa Iida (飯田道左).[iii] However, it faced financial difficulties within a year[iv], and Iida transferred the publication and management rights to Yamazaki in February 8, 1908.[v] With the exception of the issues published in 1907, UBC Library houses almost all of the original printed papers from 1908 until 1941.

The oldest paper in our collection, published in January 1, 1908, celebrated the new year with: 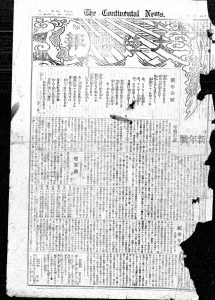 The newspaper is an important resource that captures the social lives of Japanese immigrants during this time period. It included news about social and political trends in Japan and the Japanese-Canadian community in British Columbia. 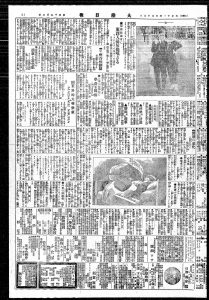 You can also find out how Japanese-Canadian businesses had developed in Vancouver area from the advertisements. The following page from July 15, 1909, for instance, has an advertisement section from the third row to the eighth row. It includes hotels, restaurants, fisheries, apparels, laundry, import stores, bookstores, funeral services, detectives, and more: 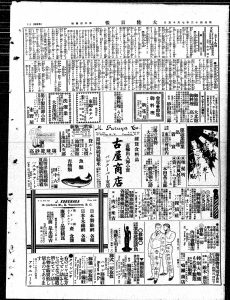 You can find articles and photographs about the World Wars in the paper. War reporting included not only Japanese and Canadian involvement, but also other countries. In July 15, 1940, page 5 reports the possibility of conscription for Japanese Canadians (right) with a photograph of a German tank (left). 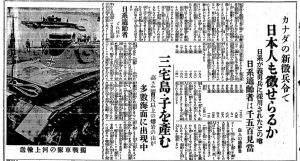 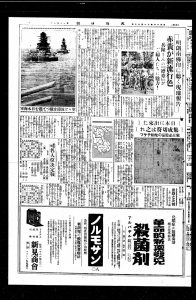 In the next month, a regular news summary started to appear twice a week, and increased its frequency to three times a week in 1936. The quotes from March 2, 1939 said: 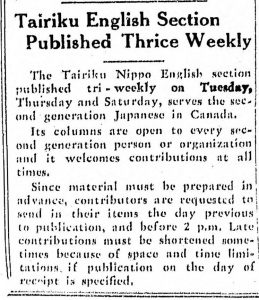 The Tairiku Nippo English section published try-weekly on Tuesday, Thursday and Saturday, serves the second generation Japanese in Canada. Its columns are open to every second generation person or organization and it welcomes contributions at all times. (pp.8)

As the following page shows, the paper included its English section in the last page of the entire paper: 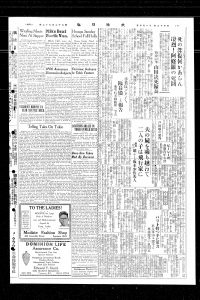 Pearl Harbor and the End of Publishing

The newspaper was continuously published until December 6, 1941, the day before the Second World War started. Following Japan’s attack on Pearl Harbor, the British Columbia Security Commission suspended the operation of the paper[vi]. All Japanese Canadians were sent to internment camps, road camps and sugar beet farms[vii] (Images from the internment period can be found in the Japanese Canadian Photograph Collection).

The last issue of Tairiku Nippō, published in December 6, 1941, consisted of seven pages in Japanese and one page in English. It was mostly about the Second World War and US-Japan relationships,and discussed the need for US-Japan talks on its first page. While there were many peace-related terms, such as reconciliation (和解, Wakai) and peacekeeping (平和維持, Heiwa Iji), there was no foreshadowing of the imminent US-Japan war. 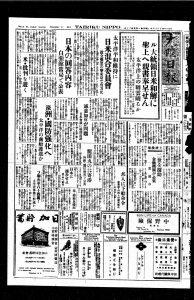 After WWII ended, the paper was re-established on December 3, 1948, in Toronto as Tairiku Jihō (The Continental Times) by Yoriki and Midori Iwasaki, a niece of Yamazaki, and was superseded by Kanada Taimusu (The Canada Times) from April 1982 until May 1998 by Harry Kunio Taba.