The Japanese Maps of the Tokugawa Era, one of the world’s largest collections of maps and guidebooks of the Japanese Tokugawa period (ca. 1600-1868), focuses on privately published and travel-related maps and guides. This unique collection has over 666,000 item views and around 18,000 item downloads, mainly from China and the U.S.

In this post, we will explore maps of the capital of Japan, Tokyo, during the Tokugawa period. As these woodcut maps are over 160 years old, when you read them, you may notice there is some damage probably caused by insects. Fortunately, such damage is mild, and thus we can understand and appreciate these colourful Tokyo maps with the help of the map keys.

This map shows the Hama detached palace (濱御殿), which is now called Hamarikyu Garden, a public park laid out in the Edo-period style. Another park shown on the map is Shiba park, which is located next to Tokyo Tower. If you refer to the map’s keys, you will find that red represents shrines and temples; yellow represents roads and bridges; grey represents houses; blue represents seas and rivers; green represents mountains and woods. You will also find that Daimyō’s upper, middle, and lower residences are indicated by family crests, squares, and circles, respectively. 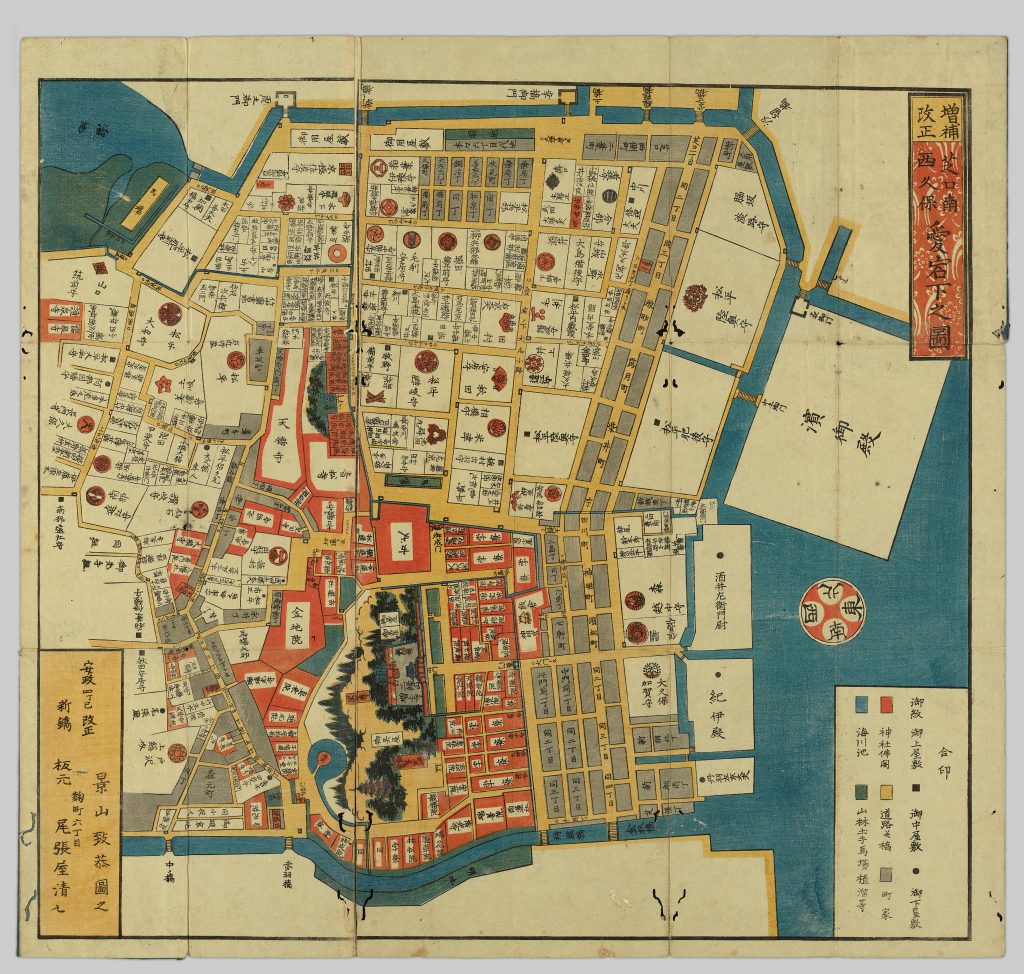 To be precise, grey represents Machiya (町家), mainly on the upper left-hand corner of the map. Machiya (町家) are traditional Japanese townhouses mainly for merchants and craftspeople. Similar to the map above, this map has several Daimyō family crests representing Daimyō’s upper residences, for example, the family crest of 森川出羽守

and the family crest of 松平讃岐守

. You can see that the area opposite the upper residence of 松平讃岐守 is his middle residence (中屋敷), which is indicated by the square

on the bottom right-hand side of the map.

The right-hand side of the map features the large temple area during the Edo Period. Formerly served as a family temple of a Daimyō family and a form of protection to the city of Tokyo, it now becomes Ueno park. 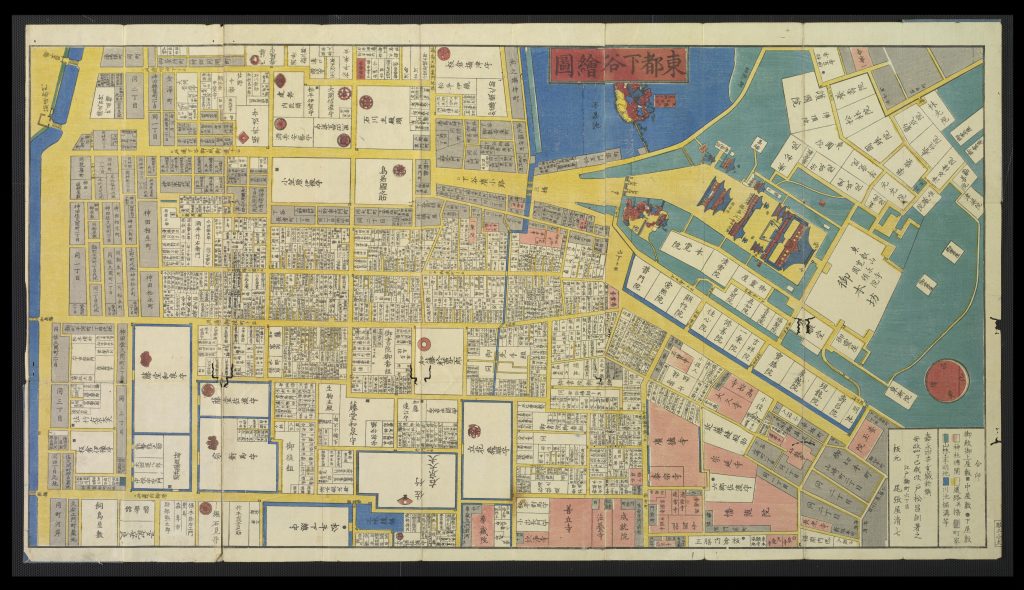 This map highlights the moat that surrounds the upper and middle residences of Daimyō, protecting the residences against attack. It also shows the south of Nihonbashi which has been a business district since the Edo Period. 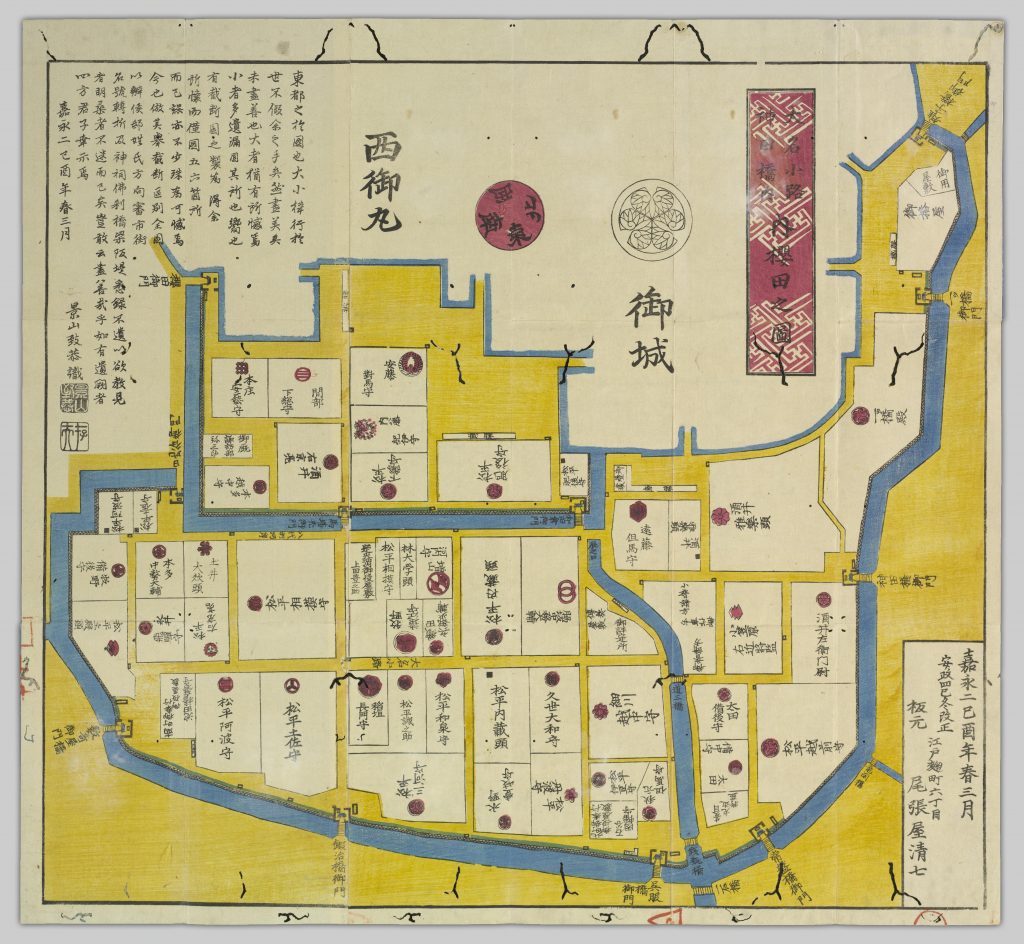 We hope you find these historical maps engaging. If you wish to find more Tokyo maps, please visit The Japanese Maps of the Tokugawa Era to conduct keyword searches: