You have probably already heard of Mah Jongg. Maybe you’ve grown up playing it or have family who play it. Maybe you’ve tried to play a video game version of it on your phone. Or maybe you’ve only ever heard the name. We are happy to have a Mah Jongg set in our Chung Collection, and we’ve pulled it out to teach you a little bit about the game and its history. 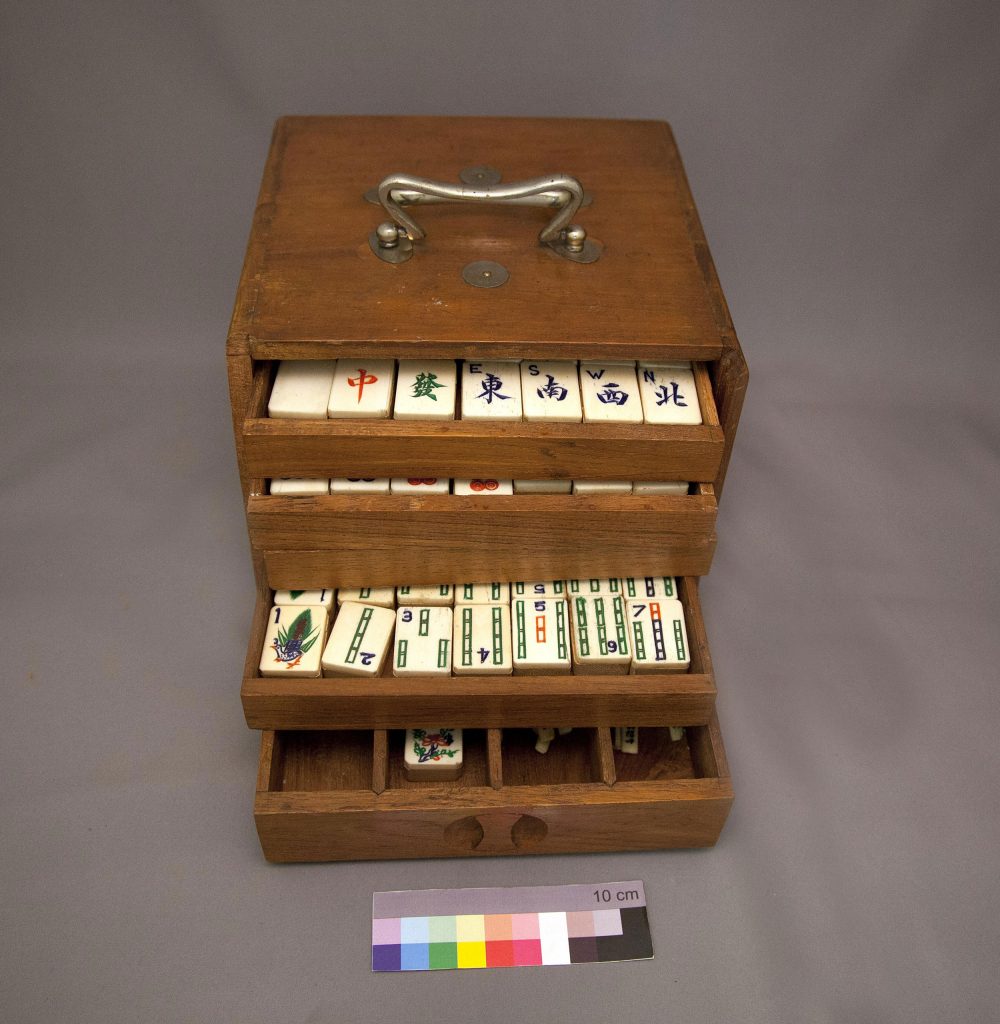 Also known as Mahjong or Mah Jong, the game originated in China near Shanghai in the mid- or late 1800s. In the 1920s, British and American soldiers in Shanghai began to play the game and one American, Joseph P. Babcock, began exporting game sets back to the United States. In 1935, he published “The Official American Rules,” which simplified the rules for American players.

Traditionally, the game has tiles made of ivory, bamboo or bones (as is the case with the set in our collection), but nowadays, the tiles are typically made of plastic or wood. There are 136 tiles, or 144 tiles if you use the optional pieces. It is a game of strategy to be played by four people.

Mah Jongg attracts many people due to the beauty of the tiles, which feature different patterns:

Four wind tiles are laid face down, and players draw one piece to check their position on the square table (north, west, south or east). Then, 14 tiles are given to the players, and they have to arrange them into four sets and a pair. The possible sets are:

The winner is the first player who completes four sets and a pair of tiles (14 tiles).

A bit of history

Around 1940, the game was banned in China due to the perception that the game encouraged gambling, and players were arrested if caught playing it. In 1985, the ban was lifted and people started playing again, increasing the popularity of the game.

Annelise Heinz, a doctoral candidate at Stanford University, studied the role of Mah Jongg in American society and found that the game contributed to community growth and increased interactions. As people from different backgrounds come together to play, they build social networks and create shared communal heritage.

Explore our Chung Collection to check out this item and other objects!

From China to US, the game of mahjong shaped modern America, says Stanford scholar (Stanford)

Mahjong: a brief history of the game (Roundhouse)