Japanese Canadian Communities in BC: Before Relocation

Ever since the first Japanese immigrants arrived in Canada in the late 19th century, Japanese Canadians have created their communities in their settlement areas. They came to a new country to find employment and to improve their economic situation. In Open Collections, we have many resources about the history and lives of Japanese Canadians. This post will introduce some of our digitized items and explore four towns where Japanese Canadians resided before relocation.

Why did Japanese people migrate to Canada in early 1900s?

Our digitized book from the Chung Collection, Japanese contribution to Canada, a summary of the role played by the Japanese in the development of Canadian commonwealth (1940) explains the background of Japanese migration. Japan ended its seclusion policy and started to establish treaties with other countries in 1854. In 1884, the Japanese government allowed its laboring-class citizens to emigrate abroad, which resulted in big waves of Japanese immigration to Canada. Having little English-language ability, most of the immigrants engaged in the primary industries which required small degree of training, such as fishing, lumbering, mining, and railroading. 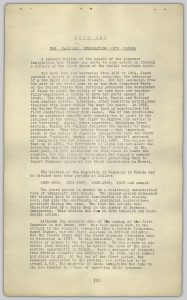 Japanese contribution to Canada, a summary of the role played by the Japanese in the development of Canadian commonwealth, 1940.

Many of the immigrants from Shiga, Japan, who experienced flooding, resided in the Vancouver area. They initially found employment at the Hastings Mill area, along the south shores of Burrard Inlet, and gradually started their business in the Powell Street area (Japantown, Nihonmachi, Paueru Gai, パウエル街) in today’s Downtown Eastside. Despite enduring the race riots in 1907, the community itself continued to grow. 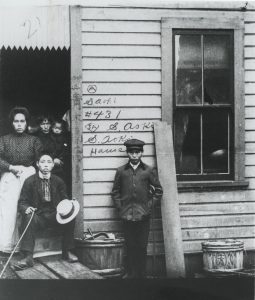 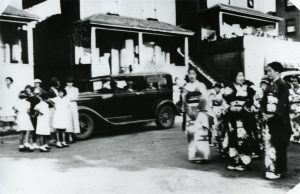 The first Japanese arrived at Steveston was known to be Gihei Kuno(工野儀兵衛). People from his hometown, Mio district in Wakayama, Japan had made their livings by fishing and farming, but they had faced severe economic hardship in the late 19th century. On his first visit to Steveston, he was fascinated by the amount of salmon in Fraser river, and returned back to Japan to urge people to go to Canada to fish. As a result, Steveston became the second largest Japanese-Canadian settlement area before the Second World War. His recruitment also made Mio district the largest single sources of Japanese emigrants to Canada.

A digitized book from the Chung Collection, Japanese contribution to Canada, a summary of the role played by the Japanese in the development of Canadian commonwealth (1940), notes that the Japanese population in the area was estimated to be around 4,500 in 1900. 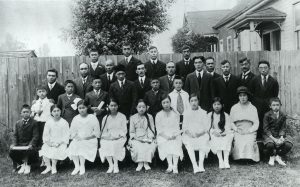 Woodfibre was a small company town operating a pulp mill between early 1900s and 2006. According to Takeo Ujo Nakano’s memoir, Within the barbed wire fence : a Japanese man’s account of his internment in Canada (1980), half of the population of Woodfibre was Japanese, and majority of them were single men. Every month, the Japanese employees were assigned to a pulp-loading duty when a Japanese freighter docked at the port. They gathered and listened to the latest news about their home country.

The digitized book Japanese contribution to Canada, a summary of the role played by the Japanese in the development of Canadian commonwealth (1940) also describes Woodfibre as one of the large centres where Japanese formed a large portion of the employment population:

The book also argues that the amount of wages for Japanese workers were lower than the Whites in the lumber, paper and pulp industries. However, it was still seven times higher than the average wage in Japan, which motivated them to continue working there and send money to their home. 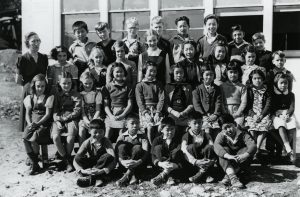 Port Alberni on Vancouver Island had a small settlement of Japanese Canadians. They engaged in the logging and lumber operation at the McLean Mill. McLean Mill/Banbridge School was built in 1929 served as a community center, and half of the students were Japanese Canadians. However, due to the Japanese relocation, the school closed permanently in 1942. 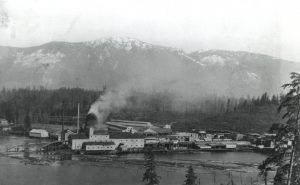 If you are interested in other Japantowns, Japanese-Canadian’s lifestyle before and after their relocation, and Canadian attitudes towards Japanese immigrants, the following are the examples of helpful historical resources in Open Collections:

6 responses to “Japanese Canadian Communities in BC: Before Relocation”