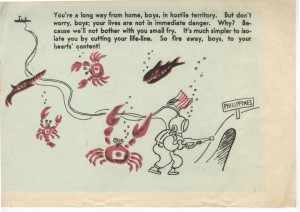 This image is from a project currently underway: the digitization of the David Conde Fonds. A Canadian journalist working in Japan from the 1940’s through the 1960’s, David Conde reported on the IMTFE (International Military Tribunal for the Far East) trials for Reuters from 1946-1948.  Also known as the Tokyo War Crimes Trials, the tribunal brought charges against leaders of the Japanese Empire for war crimes.

David Conde was ultimately expelled from the trial proceedings by General Douglas MacArthur, but not before collecting a massive amount of documentation.  Aside from the court proceedings, there are biographical profiles on the defendants, copies of exhibits, evidence, and diplomatic communications, as well as Conde’s copious research materials.

This image is an example of Japanese propaganda from the trial exhibits, intended for U.S. servicemen in the Philippines.  A fairly charming illustration on its own, the text warns of cutting off the lines of supply for Allied troops (click on the image to make it bigger).  The crabs look a little more sinister now, don’t they?

We have been partnering with the University of Tokyo to digitize these IMTFE materials – along with the rest of David Conde’s fonds – which will become available in UBC’s digital collections.  Stay tuned … in the meantime, you can read more about the David Conde fonds and its contents here.