Cruising through a collection

Every time we open a new box from the Chung Collection to digitize, it’s always exciting to see what’s in store for us. Sometimes the boxes are filled with Canadian Pacific pamphlets about train travel across the Rockies or vacation trips for “couples only” to Mexico, or menus from the Empress Hotel or Sporting Maps.

In Box 219, we found the usual array of items from menus to shuffleboard game rules, but what sets this box apart from some of the others is that every single item relates to the CP ocean liner the Empress of Britain.

The Empress of Britain was launched in 1931 as the largest passenger ship in the CP fleet and traveled the world in first class style. Not only was she launched by British Royalty, but also was host to HM King George VI and Queen Elizabeth at the end of their Canadian tour in 1939. The Empress of Britain sank in name of “King and Country” in 1940 after she had been converted from a luxury ocean liner to ferrying troops across the Atlantic Ocean as part of the war effort.

The items within Box 219 cover many transatlantic and world wide sailings, however it is possible to pick out items from an individual sailing including passenger lists, drink lists, programs of entertainment, luncheon menus, abstract logs of sailing, and personal letters written by passengers aboard the ship.  With all this we are able to create a profile of what life aboard the Empress of Britain was like, including weather throughout each sailing, which prominent people were on board and what they would eat while dining with the ship’s Captain. Meanwhile, other documents allow us to compare this with what the third class passengers could expect for their meals.

Items like these highlight the depth of the Chung Collection and give us a glimpse of life in a different era. The individual items, although interesting in isolation, become much more meaningful when correlated with other material within the collection.

Here are a few examples from Box 219. 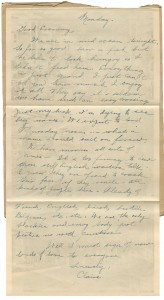 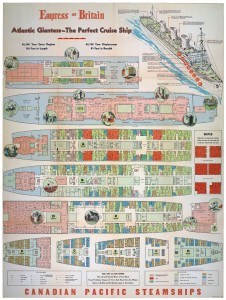 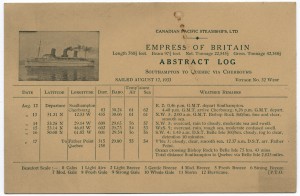