We’re very pleased to announce that we’ve successfully joined The Commons on Flickr! You can check out the announcement on their blog.

The Commons is a group of libraries, museums, and other institutions from around the world who have placed all or parts of their digital image collections on Flickr. While joining this group is exciting enough, the one thing that marks this as different from other groups is that there are no known copyright restrictions for any of the images available in The Commons. All images shared on The Commons are in the public domain!

If you look any of the images on our Flickr account (or the accounts of other groups in The Commons) you’ll see this notification in the right hand bar.

(Well, it’ll be much smaller than that, but you get the idea.)

This means that you can do whatever you want with the images! (Though we’d love it if you link back or otherwise credit us.) 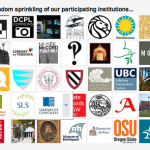 We joined Flickr last year so as to better show off some of the amazing images we’ve digitized. We hoped that by putting our photos on Flickr we’d reach new audiences and experience greater interaction. We had already succeeded in making our collections more visible, but joining The Commons will allow us to extend the reach of our collections.

We add new photos to our Flickr stream every weekday, and at most recent count had almost 900 images uploaded! That’s a far cry from the 21,000 images that The Library of Congress or the over one million (!) images that the British Library have in The Commons, but they did have a several year head start on us.