Our One Hundred Poets Collection contains 20 different card sets of the utagaruta (uta = poem; karuta = card), a variation of the Japanese game called “Karuta” (which originated from “Carta,” the Portuguese name for “Card”). The Utagaruta is a poetry game, that exercises your reflexes and memory.

The karuta is a combination of two different games. Back in the 12th century, people used to play a matching game that used clam or oyster shells. Scenes and/or poetry were painted in the interior of the shells and were laid face down. The winner of the game was the player who matched most of the shells in a short amount of time. The other game was cards, introduced by Portuguese traders in the mid-1500s in Japan. The karuta combined both games. 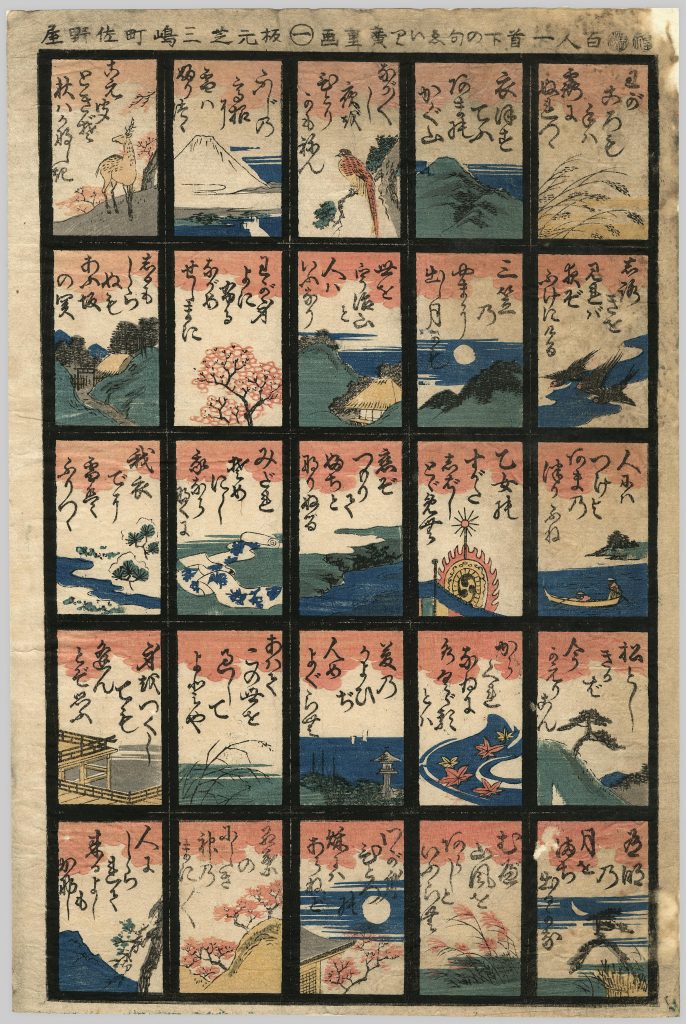 There are several types of karuta. Some of them represent flowers (hanafuda), while others represent proverbs (iroha karuta) or other poems (utagaruta). The utagaruta is the most popular version, due to it being the version used in karuta competitions. It represents the poetry anthology Hyakunin Isshu, which includes male and female poets from the 7th through the 13th century.

The poems represented on each karuta consist of a waka poem, which uses the structure of 31 syllables to arrange a 5-7-5-7-7 pattern. Each card also contains an illustration and has a matching card with only the last two verses of the poem. 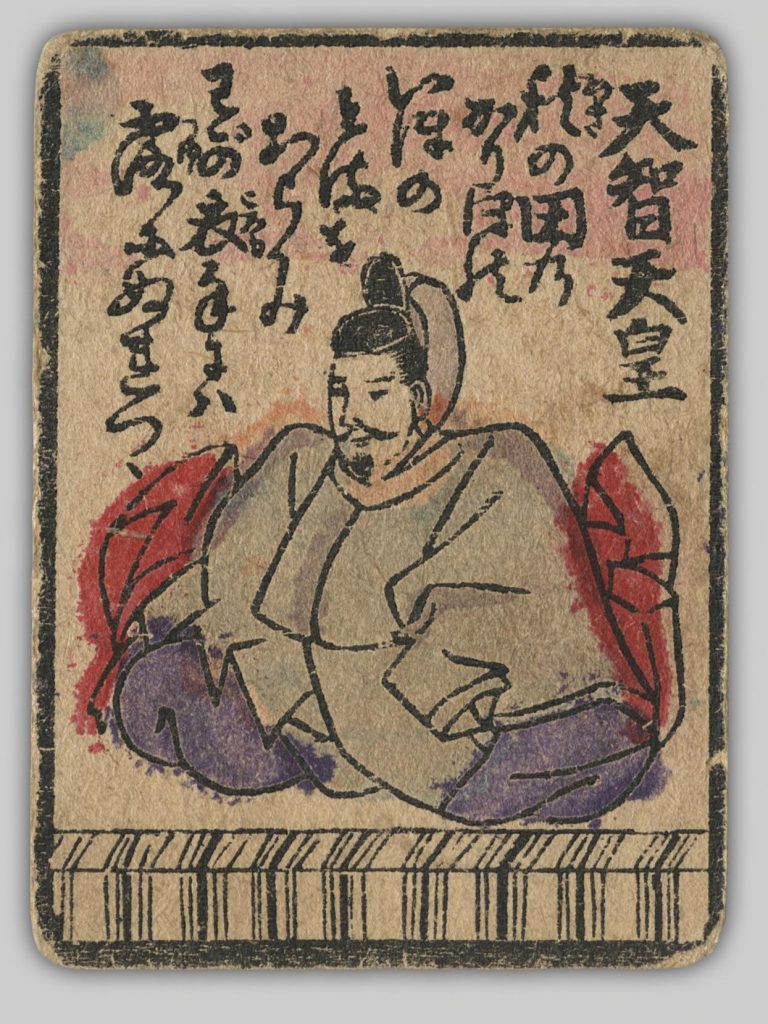 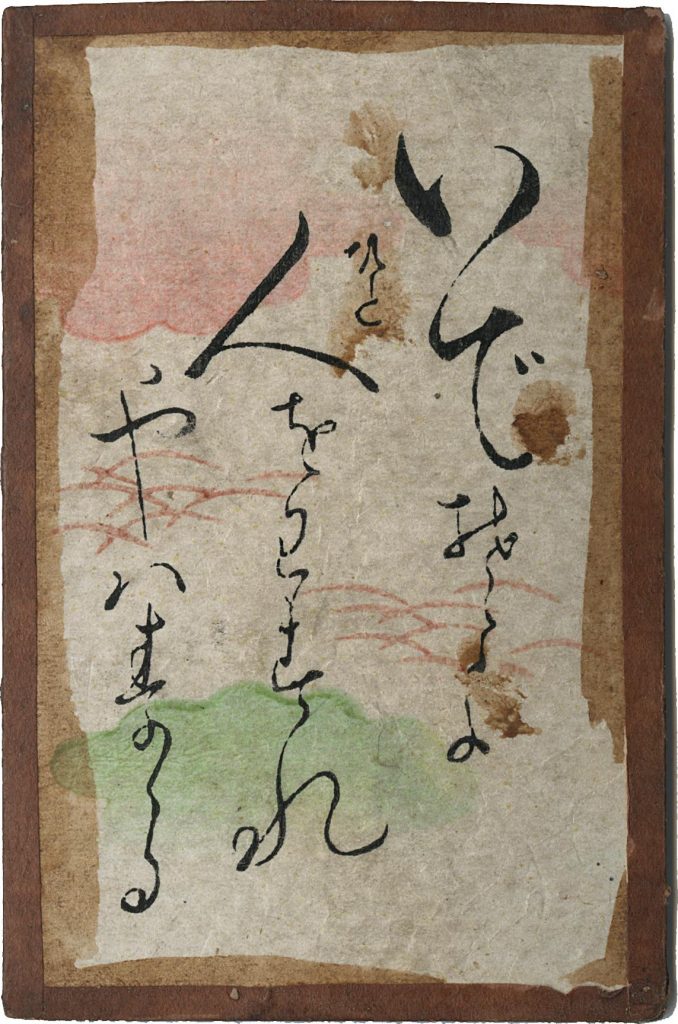 There are two types of cards: yomifuda (reading cards with the poem and an illustration of the poet) and torifuda (grabbing cards, which contain the last two verses of the poem). Each deck contains 100 poems and 200 cards.

The purpose of the game is to match the yomifuda with the torifuda card. To play, there should be one reader and two or more players.

Torifuda (last two verses) cards should be laid facing down and mixed, so each player would take 25 cards and organize them facing up, in front of them. Time is given for players to memorize their cards.

The game starts when the “reader” reads the first part of the yomifuda card (complete poem with drawing), while players try to remember and catch the corresponding card. Players can grab the card from their opponent’s territory. When that happens, the player who captures the card gives any a card in exchange, so the number of cards in play is always the same.

The game finishes when there are no cards left, and the winner is the player who captured more cards. 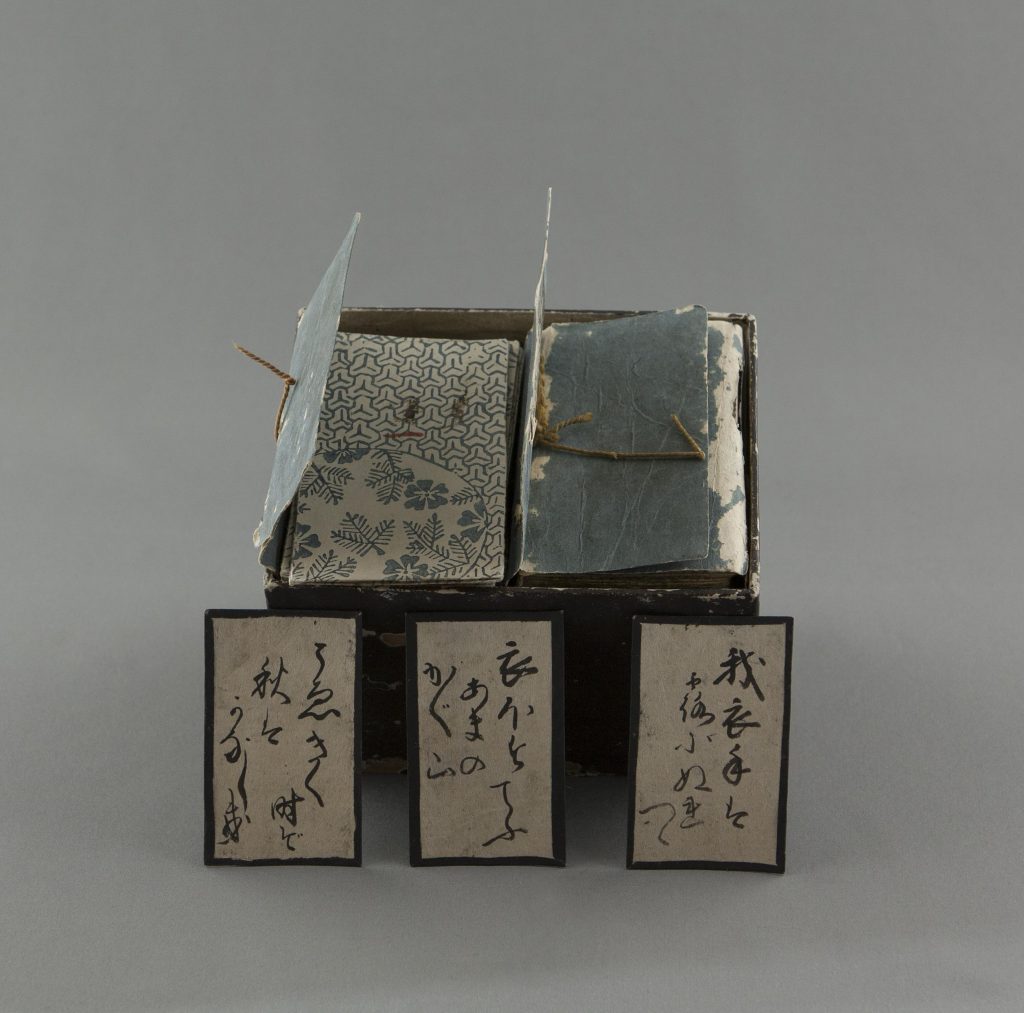 Interested in the game and the poetry? If so, check out our One Hundred Poets Collection!