A former player on the U.S. National Croquet Team, Tremaine Arkley started collecting illustrations, engravings, photographs, cartoons, paintings and other materials around the game of croquet with the sole idea of “saving the history of the game through art”, as he said in a interview with Croquet World Online (http://www.croquetworld.com/people/collecting.asp).

Now that a large selection of the Arkley Croquet Collection has been digitized and made available worldwide, we thought it was the perfect time to showcase one of its many astounding images, this one by no other than the French painter Édouard Manet. 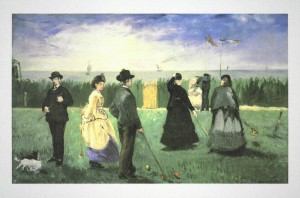 The Croquet Party, by Édouard Manet

In The Croquet Party (Partie de Croquet à Boulogne-sur-Mer), created in the 1870’s, we can see a group of upper class people enjoying a relaxed game of croquet by the sea. Like many of Manet’s paintings, this one is a window into a private moment, and such a great one that we can almost feel the breeze that’s about to blow away that woman in black’s hat.

The Arkley Croquet Collection will be fascinating for croquet aficionados, of course, but also for scholars and the general public interested in subject matters like art, advertisement and gender roles from the mid-nineteenth century to the early twenty-first century.