The UBC Library Digitization Centre and Rare Books and Special Collections have just completed the digitization of court files from the John Keenlyside Legal Research Collection. These case files from early British Columbia courts were created between 1858 and 1891, and originate from the provincial Bankruptcy Court, the Supreme Court of Civil Justice and a county court on Vancouver Island. The documents show the legal and economic atmosphere in colonial and early provincial British Columbia and provide evidence of people interacting with the court system of early British Columbia. Many of the documents pertain to Chinese and Aboriginal people in the court systems.

This collection is our first to be digitally preserved in Archivematica before being made available online in AtoM. 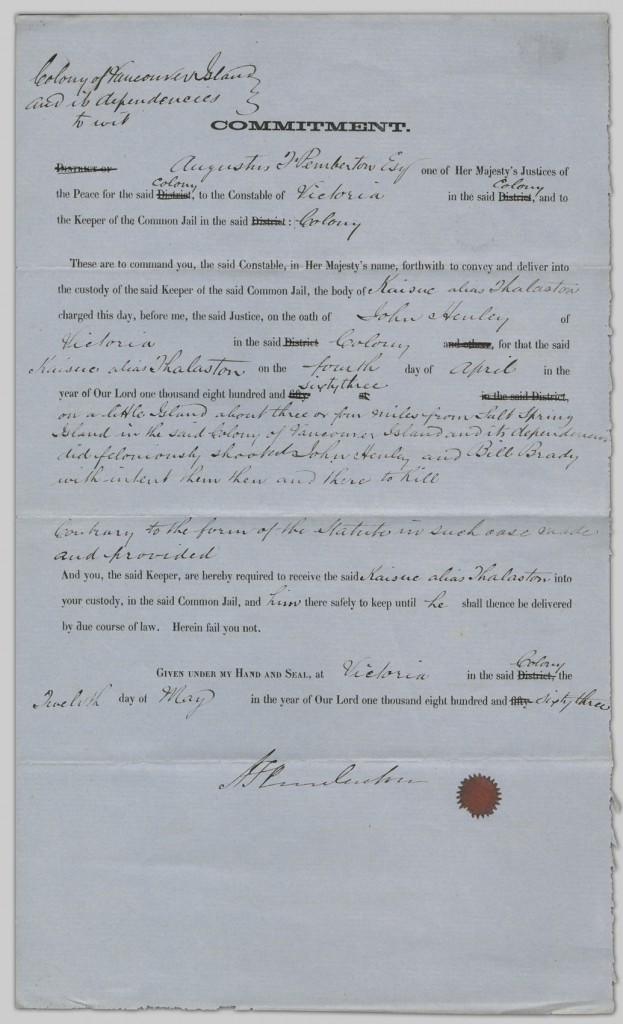 […] These are to command you, the said Constable, in Her Majesty’s name, forthwith to convey and deliver into the custody of the said Keeper of the said Common Jail, the body of Kaisue alias Thalaston charged this day, before me, the said Justice, on the oath of John Henley of Victoria in the Said Colony, for that the said Kaisue alias Thalaston on the fourth day of April in the year of Our Lord one thousand eight hundred and sixty three on a little island about three or four miles from Salt Spring Island in the Said Colony of Vancouver Island and its dependencies, did feloniously shoot at John Henley and Bill Brady with intent then and there to kill.

Contrary to the form of the statute in such case made and provided.

And you, the said Keeper, are hereby required to receive the said Kaisue alais Thalaston into your custody, in the said Common Jail, and him there safely to keep until he shall thence be delivered by due course of law. Herein fail you not. […]