Charles Darwin (1809-1882), a world-famous naturalist who introduced the concept of natural selection, was known to have exchanged letters with colleagues to discuss their shared interests in nature and animals. In one of our Open Collections, Charles Darwin Letters, you can browse 52 digitized letters written to and from Darwin. This post will explore two sub-collections acquired by UBC Woodward Library.

Darwin-Burdon-Sanderson Letters collection has about 40 handwritten letters corresponded between Charles Darwin and John Scott Burdon-Sanderson (1828-1905), an English physiologist and the first Superintendent of the Brown Animal Sanatory Institution. Woodward Library purchased the letters as a part of a collection from Dr. Hugh M. Sinclair (1910-1990), a lecturer in physiology and biochemistry at Magdalen College, Oxford in 1966.

In 1873, Darwin and Burdon-Sanderson started their collaborative research on insect-eating plants, particularly Drosera and Dionaea. Their letters in our collection, exchanged during 1873-1881, discussed their experiments on the plants’ digestive powers and leaf movements. Eventually, Darwin published the results of their research as part of his book, Insectivorous Plants (1875). 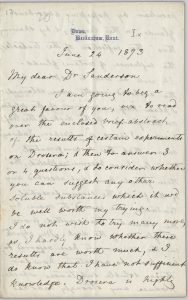 Fox/Pearce (Darwin) Collection consists of family records of the Fox branch of Darwin’s family, such as letters, observations, photographs and newspaper clips. Woodward Library purchased the collection from Captain Christopher Pearce, a descendant of the Fox family residing in Vancouver Island in 1970.

One important figure in the collection is Charles Darwin’s second cousin, William Darwin Fox (1805-1880). Like Charles, William was also a naturalist and an entomologist interested in collecting beetles. He was credited as the person who invited Charles to the world of entomology. As close friends, Charles and William maintained their relationship by writing letters to each other and sharing their interests in their fields. 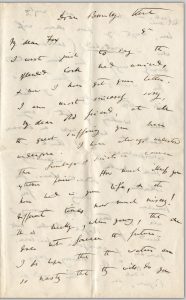 We hope you can find Darwin’s passion and enthusiasm for nature and animals through his handwritten letters. To see all of the physical materials in their entirety, please visit UBC Rare Books and Special Collections.