Made in partnership with Rare Books and Special Collections and the From Stone to Screen project, the cuneiform tablets are among the most ancient objects Digital Initiatives has ever digitized! The tablets are part of Ancient Artefacts collection, which also includes Egyptian papyri.

Receipt by a temple official of “one sheep and one lamb on the thirteenth day of the month” for rent- Can you believe those prices?! Puts Vancouver to shame.

Considered today to be one of the most significant cultural contributions by the Sumerians, cuneiform is one of the earliest known systems of writing. The RBSC tablets were created during the 20th century BCE, between 2029 – 1973 BCE, over 4,000 years ago. Cuneiform translates to “wedge shaped” from the Latin word “cuneus” meaning wedge and refers to the shape of the writing. The marks were often made with a reed. It replaced the pictorial style of writing from the 31st century BCE to about the 1st century CE. 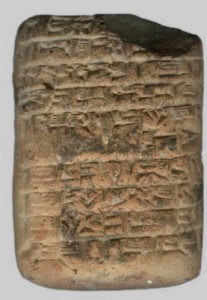 Another rental receipt – Rock receipts are starting to seem very handy- what if you get audited 1,000 years from now?

By the 2nd century CE the script had been replaced with Phoenician alphabet, and all knowledge of how to read the script was lost until the 19th century.

Determining the provenance is not easy and is sometimes impossible.

Provenance is a tricky thing especially when the items in question are thousands of years old. It’s made even trickier by people lying in order to give an object a history it doesn’t have, or even those with good intentions but inadequate or misleading information.

Which is exactly what happened with the history of these tablets. Want to know the misinformation, lies, and mysterious history behind these tablets? Stay tuned for Part 2 next week!