Expanding the BC Historical Newspapers Collection: Reflections on my Co-op Work Term

From May to August 2021, I worked as a co-op student with UBC Library Digital Initiatives. As the Digital Projects Student Librarian, I researched and evaluated newspaper titles for inclusion in the BC Historical Newspapers collection on UBC Library Open Collections. Having used the collection for research myself as an undergraduate History student at UBC, I was especially excited to contribute to the development of this important resource while also gaining hands-on experience to complement my coursework in archival studies and library and information studies. In this blog post I will reflect on my time as a co-op student, including my main responsibilities, accomplishments, and learning experiences.

Background on the BC Historical Newspapers Collection

The BC Historical Newspapers collection is a valuable, openly accessible resource for exploring the history of British Columbia through digitized community newspapers from across the province. The BC Historical Newspapers project began as the Early BC Newspapers Digitization Pilot Project in 2010 and has since been developed through multiple phases. There are currently 168 titles in the collection with over 55,000 total issues. The collection is the largest and most-viewed collection on Open Collections, consistently ranking as the most popular digital collection according to page views (Digitization Centre Impact and Activity Reports).

While the collection is already a rich and extensive resource for digitized BC newspapers, my co-op position was created to support the further expansion of the collection. The final deliverable for this co-op work term was a proposal for a next phase of the BC Historical Newspapers project. Building up to this report, I conducted research into newspaper titles and newsletter materials which could potentially be digitized and added to the collection. 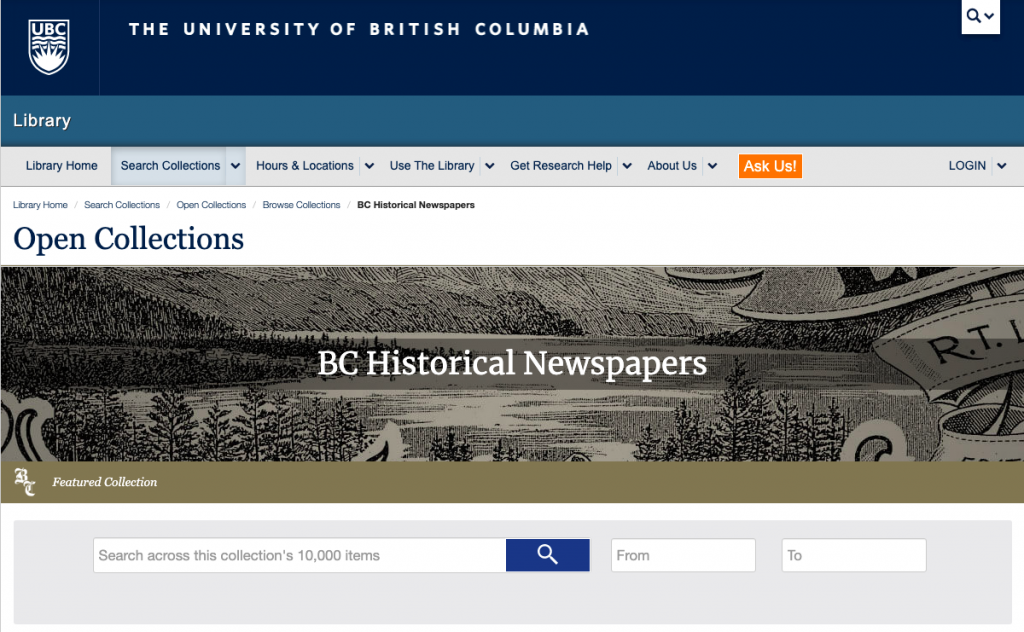 Homepage of the BC Historical Newspapers collection

My first task in this position was to create a spreadsheet organizing information about the 168 titles currently in the collection, which included determining the original source and the copyright status of each newspaper. Newspapers can be digitized if they were either published long enough ago to be in the public domain (90+ years for newspapers) or if the UBC Library secured copyright clearance by signing a non-exclusive distribution agreement (NEDA) with the copyright holder. Creating this spreadsheet allowed me to gain an initial familiarity with the titles currently in the collection and to develop a greater understanding of the Canadian copyright landscape and its implications for digitization projects.

As most of the newspapers in the collection were digitized from microfilm reels reproduced from microfilm masters held at the BC Archives, I decided to investigate if there were other newspapers held at the archives which would be good candidates for digitization. The BC Archives provides information about their microfilmed newspaper holdings through a lengthy PDF list. I began going through the list to determine if there were any titles which were out of copyright and not currently in the BC Historical Newspapers collection. It occurred to me that converting this list to a spreadsheet format would allow for more functionality in searching and sorting the titles (for example, by date or location). This would not only make it easier for me to identify titles to include in the project proposal during my co-op work term but could also serve as a useful resource for others in the future.

Creating the spreadsheet allowed me to increase my skills in information organization by designing the fields to best capture data about each newspaper title and support interactivity. I had to think critically about how to best present information in a clear and user-friendly way––for example, figuring out how to track name changes. After quite a bit of time and effort, I finished the manual PDF-to-spreadsheet conversion. Using the newly created spreadsheet, I was able to identify 214 microfilm reels containing 155 newspaper titles that are entirely out of copyright and not yet available in the BC Historical Newspapers collection.

Excerpt from the Excel spreadsheet created from the PDF list

In preparation for a meeting with a potential donor, I created a table compiling information about publications from the “underground press” in BC in the 1960-1970s. Finding that this was a useful way to pull together information about newspaper titles, I began creating similar lists for other genres of newspapers: labour and trade union publications; newsletters and periodicals from environmental groups; newspapers serving specific cultural groups; and religious newspapers. This research involved a lot of digging through online sources like the UBC Library catalogue and WorldCat, as well as referencing hardcopy inventories for microfilmed newspaper collections held at Koerner Library (specifically the Canadian Labour Papers Collection and the Underground Newspaper Microfilm Collection). These five newspaper lists are intended to serve as reference documents for future phases of the BC Historical Newspapers project.

Guide to Digitized BC Newspapers

Another project I took on during this work term was creating a library guide to digitized historical newspapers published in British Columbia. As I was conducting my research into BC newspapers, I kept coming across digitized newspapers I had not heard of before and I found that there were relatively few resources available through the library which compiled these digitized titles. To address this gap, I created a guide to freely accessible digitized BC newspapers, which will soon be made available on the Digitization Centre website.

As the culmination of my work term, I drafted a project proposal for a next phase of the BC Historical Newspapers project. To write the proposal I had to create a narrative providing contextual background, anticipate timelines for digitization, and estimate project costs. Drafting the project proposal allowed me to gain experience with professional writing and project management for digitization projects. For example, I created project plans for digitizing newspapers from both microfilm and hardcopy formats.

Overall, my co-op work term with UBC Library Digital Initiatives was a great experience. I was able to build meaningfully upon my education at the iSchool by practically applying my course learning around information retrieval, metadata and cataloguing, and digitization during my work term. This co-op position also aligns well with my long-term career goals, which involve connecting my training in libraries and archives with my passion for local history. I am pleased that I was able to contribute to the further development of a valuable resource for historical research while at the same time gaining hands-on skills which I will be able to take with me into my future career as an information professional. I would highly recommend working with the Digitization Centre to any iSchool student looking to gain tangible skills in digital preservation and digitization projects while supporting open access initiatives.